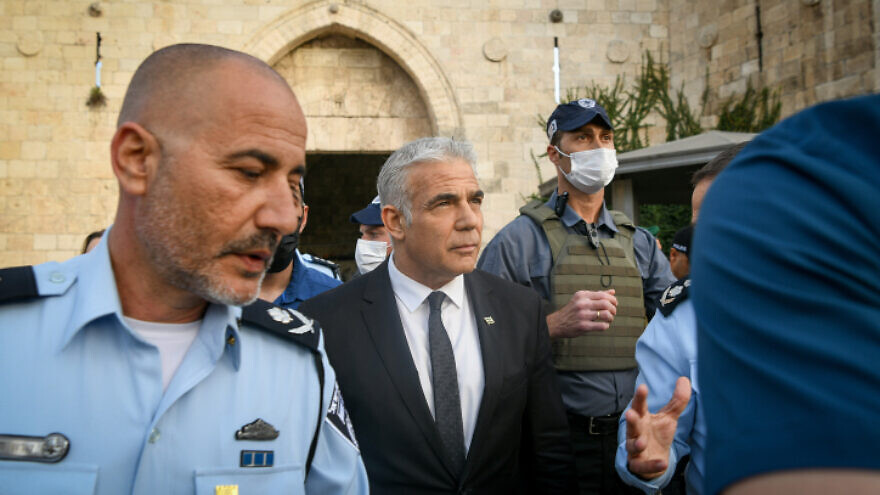 Lapid had visited security forces near Damascus Gate to thank them for their service and express the country’s appreciation, amid a spike of violence and unrest coinciding with the start of the Muslim holy month of Ramadan on April 1. The country is also in the midst of a deadly terror wave, which has claimed 11 innocent lives within a one-week span.

“The storming of the Damascus Gate by the foreign minister of the Zionist enemy, Yair Lapid, is a dangerous escalation, and the occupation will be responsible for its consequences. We and our people pledge to protect Jerusalem and Al-Aqsa Mosque,” said Hamas in a statement.

A few hours after Lapid’s visit, riots broke out in the area for the second consecutive night, with rioters hurling bottles, rocks and other objects at police. One officer was wounded, according to police. An officer was also wounded during Saturday’s riots, having been struck in the head by a bottle.

“This is a tense time, but we have a police force that can be trusted,” Lapid said in a statement on Sunday evening. “The security forces have our full backing. They work professionally in impossible conditions. We are committed to them and will give them all necessary resources,” he added.

On Sunday, the Israeli government authorized the allocation of 181 million shekels ($56.5 million) in emergency funding to the Israel Police. The budget supplement was authorized “in light of the significant challenges that Israel’s police force currently faces and given the operational gaps that have accumulated in recent years,” according to an official statement.

Also on Sunday, Israel Defense Forces Chief of Staff Lt. Gen. Aviv Kochavi told commanders during a visit to Tel Aviv that the military must be ready for a lengthy potential conflict, which he dubbed “Operation Guardian of the Walls II.”

“Operation Guardian of the Walls” began on May 10 when terrorist groups in the Gaza Strip launched a rocket barrage toward Jerusalem, followed by nearly 4,000 rockets launched indescriminately into Israel over the next 12 days. In response to the ongoing rocket fire, the IDF struck more than 1,500 terror targets in Gaza.

Kochavi said that the Palestinian Islamic Jihad terrorist organization in Gaza may launch missiles at Israel’s south in retaliation for Israel’s elimination on Saturday of a PIJ terrorist cell in Jenin, according to Channel 13 News.

Three PIJ terrorists were killed and four Israeli forces were wounded, one seriously, in a counter-terror operation early on Saturday morning in Judea and Samaria.

According to senior Israeli security officials, the cell was preparing to cross into Israel to carry out an attack in the center of the country similar to the one on March 29 in Bnei Brak, in which five people were killed.

The terrorists had already switched the license plates on their vehicle from the Palestinian Authority to Israel, according to the Israel Security Agency.

Shahar Klaiman contributed to this report.