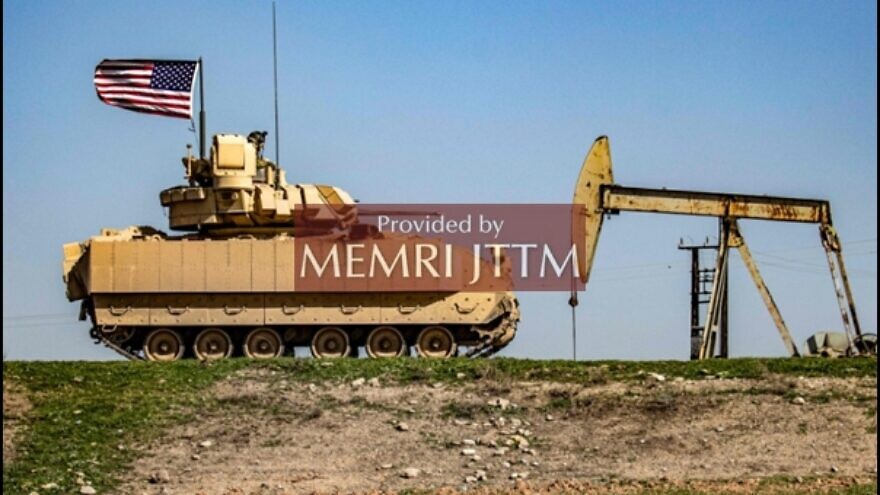 This photo of what appears to be a American tank was published in Hezbollah-affiliated media. Source: MEMRI.
Spread the word.
Help JNS grow!
Share now:

(October 25, 2022 / JNS) Several strikes against American forces in Syria were reported by Syrian Telegram channels and other media in October, according to a report by MEMRI’s Jihad and Terrorism Threat Monitor (JTTM).

Some of these reports were confirmed by U.S. forces. On Oct. 23, for example, there was a report of rocket fire targeting a location where the Global Coalition to Defeat ISIS forces are stationed in the Al-Omar oilfield in Deir Al-Zour Governorate.

Meanwhile, on Oct. 15, there was a report of rocket fire at the Al-Omar base, and on Oct. 8, a report of a thwarted rocket attack aimed at coalition forces near Rumaylan, a town in the Al-Hasakah Governorate in the northeast of Syria. Finally, on Oct. 3, it was reported that an IED was detonated against an American patrol near the Iraqi border.

This phenomenon is not new; the Assad regime has been fighting against the American military presence in the country through what it calls “popular resistance” even though the government organizes and controls the activity.

Two articles were published in Hezbollah-affiliated Lebanese media on Oct. 24 and 25, relating to strikes this month on American forces in Syria.

According to an article in the Al-Akhbar newspaper concerning rocket fire aimed against the Al-Omar base on Oct. 23, the attack was carried out in the context of a policy according to which any Israeli attack on Syrian territory will be met with an attack on American forces.

An article on the Hezbollah website urges Syrians to intensify their attacks on American forces in the country.