“Judith with the Head of Holophernes” by Cristofano Allori, 1613, oil on canvas, from the Royal Collection in London. Credit: Wikimedia Commons.
Republish this article
901 WORDS
Spread the word.
Help JNS grow!
Share now:

(November 18, 2021 / JNS) Holding a sword in one hand and a severed head in the other, she is terrifying and beautiful, a personification of the feminine power to entice, destroy and redeem.

This is Judith, a pious Jewish widow who, in the apocryphal book that bears her name, seduces and then beheads an enemy general. An object of fascination for millennia, she inspired paintings by Caravaggio and Michelangelo, oratorios by Vivaldi and Mozart. She also appears on antique menorahs.

In Jewish tradition, Judith—or Yehudit—is the heroine of the Hanukkah story. A female counterpart to Judah the Maccabee, she is credited with precipitating the Syrian-Greeks’ downfall with her courageous act. Some Jews eat dairy products on Hanukkah to commemorate the salty cheese she offered to the general before she killed him.

But Judith’s path to Hanukkah heroine was not a smooth one. In fact, for more than a thousand years after it was written, her story was forgotten.

“It is not clear precisely when or why [Judith] disappeared from Jewish tradition, nor do we know for certain whether it was originally written in Hebrew or in Greek,” Deborah Gera, emerita professor of classics at Hebrew University of Jerusalem and author of a commentary on the book of Judith, told JNS.

The oldest copy of the book of Judith is found in the Septuagint, a Greek translation of the Hebrew Bible compiled around the second century BCE. It reads something like this:

Judith, a beautiful and religious widow living in the Judean town of Bethulia, finds herself at a critical juncture in history—Holofernes, a general of Nebuchadnezzar, “king of Assyria,” has besieged her town on his way to conquer Jerusalem. The townspeople are ready to surrender, but Judith reprimands them for their lack of faith and convinces them to wait a little longer. She dresses in her finest garments, approaches the enemy camp and demands to see the general, claiming to have information to share.

Holofernes is entranced by her beauty and invites her to a banquet in his tent. At Judith’s urging, he drinks “so much [wine] as he had never had in his life” (12:20) and passes out. Judith utters a prayer and beheads him with his own sword. She takes Holofernes’s head back to Bethulia and tells the people to hang it from the city walls. The encouraged Jews proceed to rout the disheartened Assyrian army; Judith sings a song of praise to G-d and lives to be 105 years old, during which time “there was none that troubled Israel” (16:30). 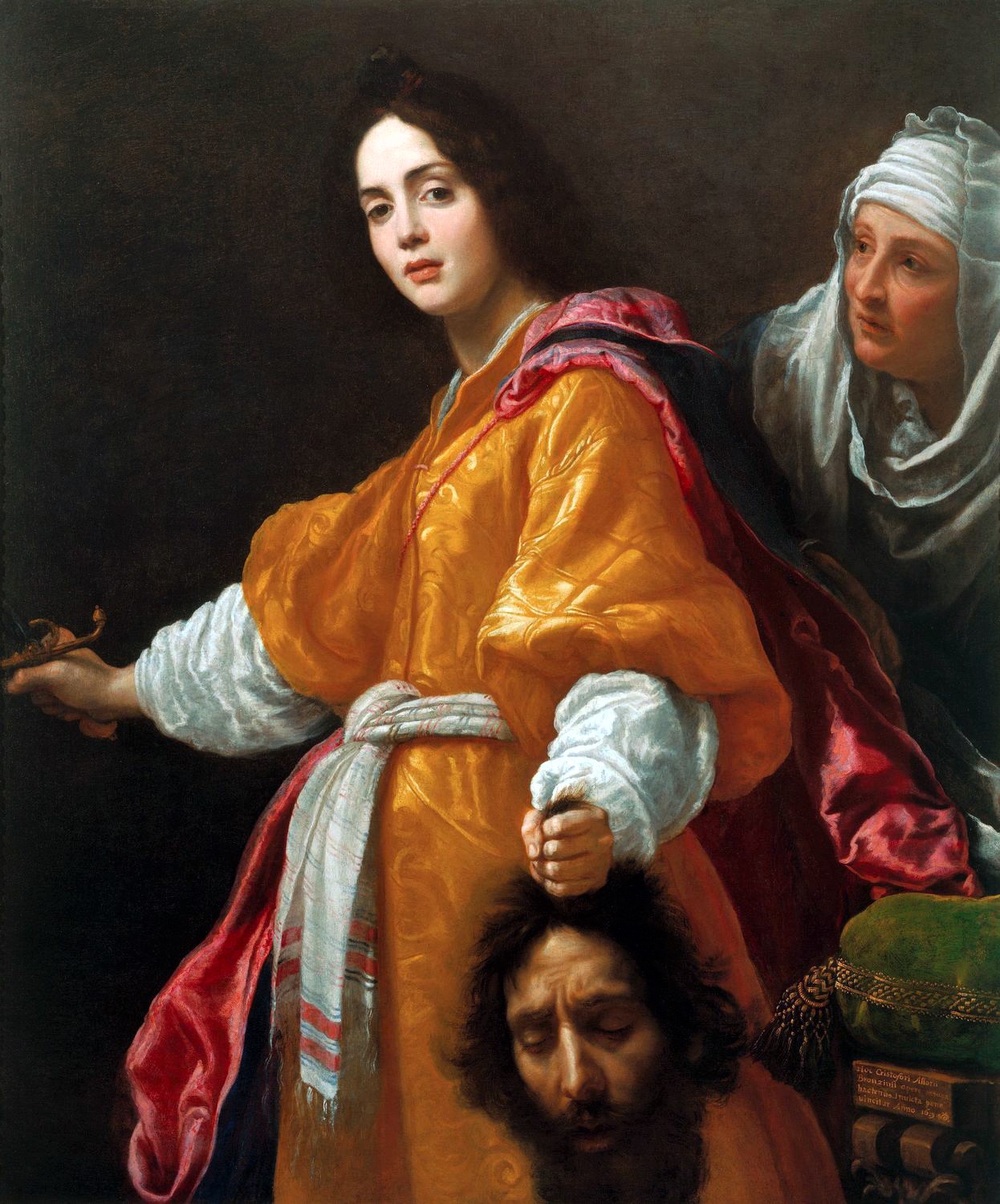 “Judith with the Head of Holophernes” by Cristofano Allori, 1613, oil on canvas, from the Royal Collection in London. Credit: Wikimedia Commons.

‘Women are obligated to light the menorah’

Though scholars agree that it was written by a Jew, the book of Judith, like the book of the Maccabees, was not included in the Tanach, the Jewish scriptural canon. This may be because it was composed so late (scholars date it to around 100 BCE) and because the text contains obvious anachronisms: Nebuchadnezzar was a Babylonian king (the Assyrians were his enemies); the story takes place in the “13th year” of Nebuchadnezzar’s reign, or 592 BCE—five years after the first Babylonian siege of Jerusalem; and the town of Bethulia is not mentioned anywhere else in scripture or historical records.

Being excluded from the canon did not cause the Maccabees to be forgotten—their story was preserved in the Talmud—but for Judith, it was fatal. She is not mentioned in the Dead Sea Scrolls or other early sources. “When Judith returned to Jewish sources in medieval times, it was in the wake of the translation of the Vulgate, the Latin version of Judith, into Hebrew,” said Gera. “The Vulgate version of Judith is different from the Greek one, with Judith a less independent figure, and the medieval Jewish Judith comes from this Latin tradition.”

It is in these medieval tales, or “Judith midrashim,” that Judith becomes a Hanukkah heroine. In them, Nebuchadnezzar is Antiochus IV Epiphanies, the evil Syrian king of the Hanukkah story; Judith is the daughter or aunt of Judah the Maccabee, her victory over Holofernes mirroring Judah’s beheading of the Syrian general Nicanor. And while the first Judith brought her own food into Holofernes’ tent to avoid eating non-kosher food, the Hanukkah Judith brings salty cheese, which she feeds to the general, causing him to binge on wine.

The Judith midrashim eventually found expression in Jewish law. The medieval French commentator Rashi alludes to Judith, writing that women are obligated to light the menorah because the miracle of Hanukkah was brought about by a woman. In his commentary on Shulchan Aruch, the “Code of Jewish Law,” Rabbi Nissim ben Reuben (c. 1310-1375) calls Judith the daughter of the High Priest Yochanan and cites her story as the source for the custom of eating cheese on Hanukkah.

Despite her long absence from Jewish tradition, the historical interpretation of Judith is likely correct. The Maccabean Revolt took place in 164 BCE, six decades before the book of Judith was composed, and it is entirely possible that the author intended the story to be understood in that context. Certainly, Judith makes Hanukkah—and its cuisine—richer.

“Judith is a paradoxical, challenging heroine, a pious and seductive woman who prays regularly to God and saves her people by lying and killing,” said Gera. “Some modern readers of her story may have reservations about the means Judith uses to achieve her ends, but it is difficult to resist her cleverness, independence and beauty.”