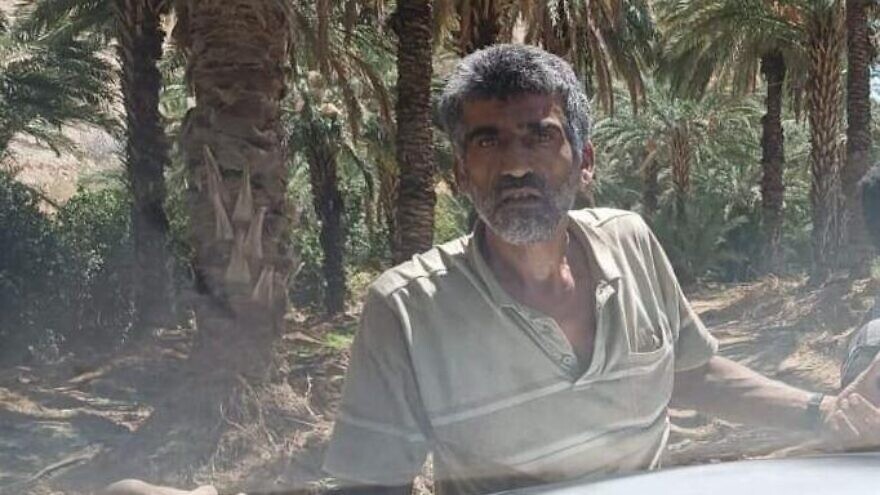 Maher al-Sayeed, who is suspected of attacking a passenger bus in the Jordan Valley on Sept. 4, 2022. Credit: IDF.
Spread the word.
Help JNS grow!
Share now:

(September 6, 2022 / JNS) The Israel Defense Forces on Monday identified Maher al-Sayeed, 50, as the third suspect in Sunday’s attack on a passenger bus in the Jordan Valley that wounded seven Israelis, according to Ynet.

Al-Sayeed, who remains at large, is a farmer from a village located in the area where the attack took place, according to the report. He was arrested three weeks ago for illegally diverting water to his land.

The car used in the attack had Israeli license plates and was registered to al-Sayeed’s wife, who has an Israeli ID, Ynet reported.

The report named the other two terrorists, who were apprehended shortly after the assault, as relatives Walid and Mohammad Turkman from Jenin.

A preliminary investigation concluded that the attackers were armed with M-16 rifles, which they received, along with funding, from a Palestinian terrorist group.

Meanwhile, Channel 12 on Monday reported that the bus driver was shot and had fallen to the floor, and that an IDF officer, who had also been wounded, took his place and used the handbrake to stop the bus.

During the firefight, another wounded soldier managed to hit the assailants’ car, causing it to catch fire and preventing them from using it to get away.

The soldiers on the bus were members of the Kfir Brigade, an infantry unit stationed in Judea and Samaria and tasked with combating Palestinian terrorism.

None of the soldiers sustained life-threatening injuries, and the condition of all the wounded was reportedly improving on Monday.