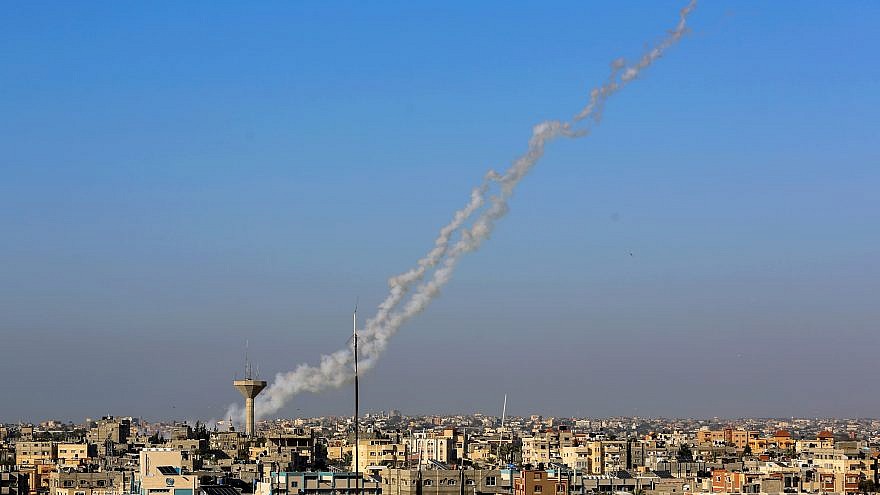 Smoke trails rise as a rocket is launched from the southern Gaza Strip towards Israel on May 4, 2019. Photo by Abed Rahim Khatib/Flash90.
Spread the word.
Help JNS grow!
Share now:

(February 5, 2020 / Israel Hayom) The Israeli military carried out airstrikes on Hamas targets in the Gaza Strip on Wednesday after terrorists based in the coastal enclave fired three rockets at southern Israel.

“IDF warplanes attacked Hamas terror targets in the southern Gaza Strip. A site for manufacturing weapons for Hamas’s military wing was attacked, dealing a blow to Hamas’ ability to further arm itself,” the IDF said in a statement.

“The strike was carried out in response to projectile fire and incendiary balloons [sent] from the Gaza Strip into Israel,” according to the statement.

Sirens wailed over Israeli communities near the Gaza border shortly after midnight, as at least three rockets were fired from Gaza on the country’s south.

“The Color Red alert was triggered in the city of Netivot and in the area near the Gaza border,” said the IDF. “Three launches were identified by IDF radars as coming from the Gaza Strip into Israeli territory.”

According to the IDF, 13 rockets have been fired into Israel so far this week.