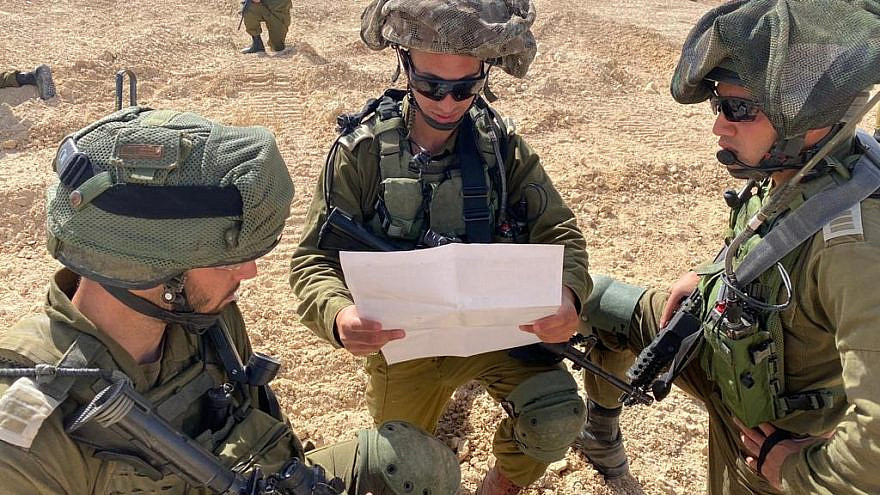 Lt. Col (res.) Gideon Sharav, head of Military Studies department at the TCC, and today a civilian employee of the IDF, has been at the academy since the day of its founding twenty years ago, and told JNS that it represents “the most serious effort by the green IDF [the Ground Forces] to create a level of professional specialty.”

Unlike West Point, which receives cadets and turns them into officers, Israeli officers arrive at the TCC through the rank and file, and already arrived as officers at the rank of lieutenants. The officers arrive from across the whole of the Ground Forces—the infantry, armored corps, engineering corps and artillery corps.

They study for two years—the longest-running qualification program in the Ground Forces—during which they dive into military studies, leadership and obtain a bachelor’s degree in either economics, political science, education, media or biology at the University of Haifa.

During this time, they also analyze some 80 military battles from Israel and abroad, in addition to 3,000 years of military history. This qualification includes recreating battles.

“Our graduates stay in the system for longer.”

Exercises, lectures and visits in Israel and abroad instill military lessons in the officers, said Sharav, citing a trip to Vietnam before the coronavirus pandemic hit, where the officers studied the strategies and doctrines of the Vietnam War.

Nevertheless, noted Sharav, “the interesting figure is that half of the IDF’s battalion and brigade commanders [the command positions that follow company commander] are our graduates. One of the things that we manage to create is a military identity.”

Following the Second Lebanon War of 2006, the Knesset’s Foreign Affairs and Defense Committee examined officer training issues and called on the IDF to expand the number of officers that pass through the TCC.

“This has happened, but not sufficiently,” reported Sharav. “Company commanders today have much more on their shoulders compared to their counterparts from 30 years ago. They have many more capabilities; they must conduct multi-domain combat and activate firepower. The complexity that is required of them in Lebanon or Gaza, and the state of Israeli society, are not similar to what was in place 30 and 40 years ago.”

Col. Shahar Back has been the Commander of the TCC for a year. He told JNS about the relatively new IDF concept of going beyond the traditional model of on-the-job training for officers.

When security incidents and conflicts were frequent—and when wars occurred every decade, as well as significant military operations erupting every three to four years—on-the-job training was “very substantial,” explained Back, since “commanders experienced combat conditions. They experienced real developments in command and in combat.”

Fortunately, he added, escalations have grown further apart with no major armed conflict since 2014, creating a situation where “on-the-job training doesn’t cut it anymore.”

That has led the IDF to reach the same conclusion as the U.S. military; that alongside technological training and upgrades, and multi-domain combat, it is the intellectual quality of the officers that truly provides an advantage in combat. “We are working on creating that level of intellectually high-quality officers,” said Back.

With the Israeli Navy and Air Force each having their own well-established officer courses, the Ground Forces’ only equivalent is the TCC.

As part of their leadership, the officers study time management, written expression, and crisis and conflict management.

“It really crystallizes the organizational identity. Our graduates stay in the system for longer,” said Back. Every year, the TCC graduates some 60 company commanders, who go on to form the professional core of the IDF Ground Forces as they gradually move up the ranks, and become battalion and brigade commanders.

The number of TCC graduates in the higher command levels means that “these officers stay longer than those who didn’t pass through the TCC. It means they are more committed, that they have a sense of mission that is totally different,” he added.

Following the 2014 conflict with Hamas and Palestinian Islamic Jihad, eight out of the 10 Ground Forces company commanders who received citations were TCC graduates, a further indication of the influence the academy has had.

Cadets also take an annual test after their first year, in which they summarize their own progress. Some have noted the intense failures that they have experienced during their training—a natural part of the course—and described how they were able to analyze those setbacks for the first time, to see where they failed and why, and learn from it.

“We have to create these failures in a controlled manner in order to study and learn from them, professionally, and in an in-depth manner,” said Back. “The CCT is very personal. It’s about fostering maturity and identity. Building character is what we offer here. The difference between how cadets enter and leave our gates is the cardinal thing here; their development is highly accelerated,” he said. “What matters is not the difficulty, but the difference in how one enters and leaves. Personal experiences are very empowering.”

As part of their leadership, the officers study time management, written expression, and crisis and conflict management.

Officers are placed in situations of simulated conflicts among personnel, where there are no good or bad decisions, only the least worst decisions to choose, he explained.

“It really crystallizes the organizational identity.”

“This is very personal, and the officers use these simulations to get better at decision-making under pressure and uncomfortable conditions. This is based on the understanding that when they find themselves in tough situations in the field, they will say, ‘Wait a second! I remember what this feels like when the ground seems to be vanishing under my feet. I remember what it feels like to have unresolved tension—the feeling that whatever decision I take will be imperfect. I’ve been in this situation, I know the order of actions, I know how to analyze this,” related Back.

“Instead of doing this trial and error on people, which includes acute errors, they’ve already practiced this, and they arrive at their commanding positions as experienced commanders without mistakes that can cost lives or lead to failures of real-life processes,” he said.

Officers enter the TCC aged 22 or 23, and form groups of 15, with each group receiving instruction from a battalion commander. Such intimate training creates “hugely significant value,” said Back. “This can’t be mass-replicated.”

He said “in the end, we have the 72-year-old IDF narrative that says that on-the-job field training is what is important, which is great, but what happens when friction stops? The tools we provide them will serve these officers for many years.”

The TCC holds close cooperation with West Point, and the two academies have exchanged delegations every year except for 2020, due to coronavirus limitations. “We also exchange ideas and have a mutual patent-exchange program,” said Back. “The IDF is building its professional backbone here.”