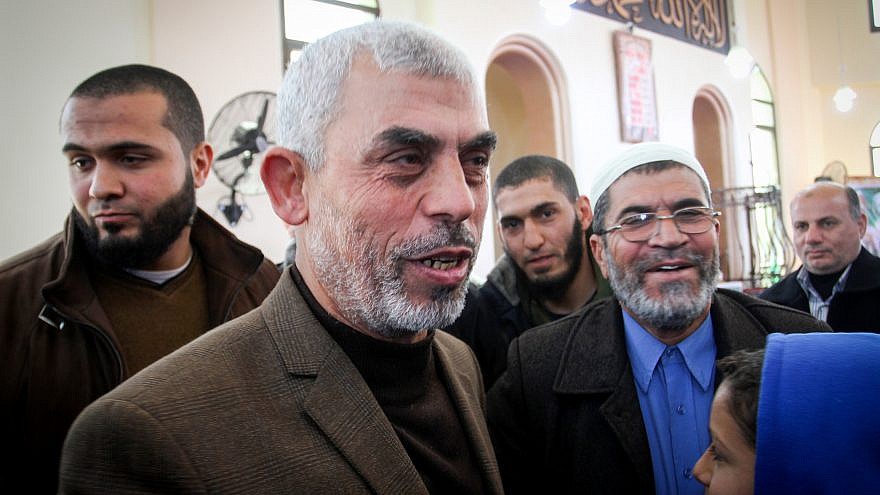 Yahya Sinwar, the leader of Hamas in Gaza, in Rafah in the southern Gaza Strip on Feb. 24, 2017. Photo by Abed Rahim Khatib/Flash90.
Spread the word.
Help JNS grow!
Share now:

(April 6, 2020 / MEMRI) Hamas leader Yahya Sinwar threatened last week that if Gazans start dying of COVID-19 due to a lack of ventilators, the terrorist group would make “6 million settlers unable to breathe.”

Speaking with Hamas’s Al-Aqsa TV and Shehab News Agency on April 2, Sinwar addressed Israeli Defense Minister Naftali Bennett, who he said had a “Merchant of Venice mentality along with the rest of Israel. Bennett should read the prophecies contained in Chapter 17 of Ezekiel, which are “about to come true for the Zionist entity,” said the Hamas leader.

“I would like to use this opportunity to say a couple of words to Zionist Defense Minister Bennett: I refer you to the book of Ezekiel, Chapter 17, to read what awaits you, and what awaits your filthy [Zionist] entity, because the kind of language that you use can be expected only from someone who has a Merchant of Venice mentality.

“The Merchant of Venice gave people loans, and when the time came and they could not repay their debts, he started to cut off their flesh as payment for the money he had given them. This is the common practice of Bennett, and of the entire Zionist system that has occupied our land. I refer him to the book of Ezekiel, Chapter 17, about what awaits them from this pandemic and from other things.”

Sinwar emphasized that Hamas does not need any aid from Israel to cope with the coronavirus pandemic, and has been working “day and night” towards the liberation of Palestine. The coronavirus pandemic, he said, had been sent by God as retribution for the move of the U.S. embassy to Jerusalem and because God is “not pleased about the way the things in this world are run.”

“As for the question about whether we need them to give us anything—we don’t need anything from the occupation,” he said. “But I say this loud and clear: God forbid, if a time comes when we have no choice but to watch our citizens breathe their final breaths, and when there are no ventilators—I say to Bennett that we will make 6 million Israeli settlers unable to breathe.”

With regard to the United States, Sinwar said the pandemic was God’s punishment for U.S. President Donald Trump declaring Jerusalem the capital of Israel.

“When I saw Trump signing his decision to allocate $2.2 trillion for the coronavirus response, I recalled how he had signed in the same manner his decision to declare Jerusalem as the capital of Israel. I said then: You and the Americans will pay the price for this unjust and criminal decision. Today, our Lord, by means of this virus, which cannot be seen by many telescopes and microscopes. … This virus can only be seen by a small number of them, but it has entered all the cities of the world, where curfews have been declared, because our Lord is not pleased about the way things in this world are run.”