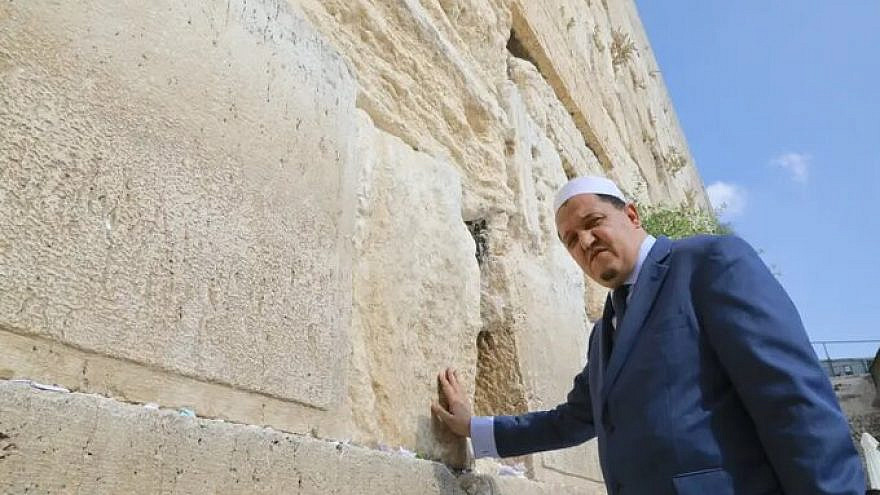 (January 15, 2023 / JNS) Born in Tunisia in 1972, Hassen Chalghoumi received his undergraduate degree from a university in Damascus before studying theology in Pakistan.

The father of five children, he arrived in 1996 in France, where he became the imam of the Drancy mosque in the northeastern suburbs of Paris. He has served as president of the Conference of Imams in France for almost 20 years, during which time he developed close ties to the Jewish community.

Chalghoumi’s work has in some circles earned him the moniker “Imam of the Jews,” in others as the “Imam of Peace.”

His mission: To bring people closer together in order to fight antisemitism and also Islamism, more specifically political Islam.

We sat down with Chalghoumi during his recent visit to Israel.

JNS: What brought you here?

A: In 2004-2005, I often had encounters with the members of the Jewish community and also went to Holocaust memorials since I am the imam of Drancy, a city known for its relationship to the Shoah. I have friends who spoke to me about Israel but initially I said, we are French Muslims, you are French Jews, it’s unnecessary to speak about Israel because we are neither Palestinians nor Israelis.

I had this tendency to avoid speaking about politics or international affairs and instead focus on France. But whenever I attended events that were related to the Shoah and getting closer to the Jewish community, and in relation to the [Conseil Représentatif des Institutions Juives de France, the umbrella group representing Jews in France], I was brought back to Israel and the Palestinians and Gaza.

In 2009, I made the decision to come to Israel, to get to know the Israeli population and the geopolitical situation first-hand.

JNS: Do you believe that additional Arab and Islamic countries will make peace with Israel?

A: Years ago, nobody believed that Arab countries would do so. And I would like to recognize four people, the first being Sheikh Mohamed bin Zayed, the president of the United Arab Emirates, a courageous man who deserves respect. He helped bring the UAE into the modern world and he made history. Second is the king of Bahrain, I know him very well, I have great relations with him, Hamad bin Isa Al Khalifa. Also, the king of Morocco, his majesty Mohammed VI. Finally, Vice President of Sudan Mohamed Hamdan Dagalo.

They had the courage to forge peace with Israel.

You know, the population is changing, we have hope in the Arab and Muslim worlds as it pertains to Israel. Previously, this was impossible because of all the lies by Islamists and extremists and antisemites, this defamation and this racism against Israel and against the Israeli population.

And also the ignorance and the Arab media for 60 years, the Arab nationalism manipulated the spirits of the Arab world. Today, spirits are free and see the truth for themselves. Today there are synagogues in Dubai, Abu Dhabi, Bahrain, Morocco and soon in other places. I believe that this year, God willing, and by the way during my visit to the Knesset, we talked with ministers who are close to [Prime Minister Benjamin] Netanyahu on the importance of continuing this dream, so that the Abraham Accords extend everywhere in the world.

Q: What is your view on radical Islam?

It’s a poison, it’s the cancer of Islam. It’s a sickness to fight. Some can be healed but others unfortunately we need to fight using the law and also a firm hand. My message is that Israelis and non-Muslims should not confuse Islamism with the majority of Muslims who are silent. We saw this in France, where there is an increase in support for the extreme right-wing party, racism reaching new heights but also the extreme left party, they are allied with Islamists, they believe that Islamists are Muslims, and for the right-wing party every Muslim is an Islamist.

My message is clear: There is a need to find all necessary ways to get rid of extreme lectures which have nothing to do with the general teachings of Islam—of tolerance, openness and respect.

Q: What is your relationship with the Jewish community in France and beyond?

I am the imam of Drancy, the imam of the city of Shoah, and a man of faith and religion and a humanist, I am a witness, in between my house and the mosque of Drancy, every day I pass by the memorial of the Shoah. I am a witness to the hatred that was, how humanity lost its soul. From Drancy, [the French police and the Nazis] deported almost 90% of the men, women, children. Why were they deported, why were they killed? Because they were Jews. They belonged to a community and a religion which is mine too in a way, a monotheistic religion.

This duty of remembrance makes my relationship with the Jewish community very special. It’s a duty to testify and it’s a duty to fight against forgetting, because if we forget the Shoah, it means that history will repeat itself. Genocide took place and still does, so we have to be careful.

The duty of remembrance is what makes my relationship with the Jewish community so strong in France and all over the world. Also, if we look at Islam and its practices, most practices are extremely close to Judaism. My relationship with Jews in France, in Europe and in the United States, in Tunisia also, it’s a fraternal relationship, and my relationship now with Israel and Israeli society will allow me to talk and to influence others.

Q: What would you say to Muslims who may have preconceived notions about Jews and Israel?

The Koran is the message, it talks about reaching out to others, speaking with tolerance, openness and respect to the family of the peoples of the Book, and especially the children of Isaac, the children of the descendants of Israel, Moshe. I cannot be a real Muslim believer and at the same time an antisemite who hates the Jewish community, it means betraying a great deal of my faith.

It’s essential to reach out to others and have a dialogue. We can have positions on Israeli politics that differ, it’s a freedom which exists even within Israel.

The key here is dialogue, and come see for yourself, come and visit Israel. Every time I bring young people and imams, even at the Knesset you have a prayer room, a small mosque, I prayed there. This is a country of apartheid and racism? I’m sorry, it’s not.