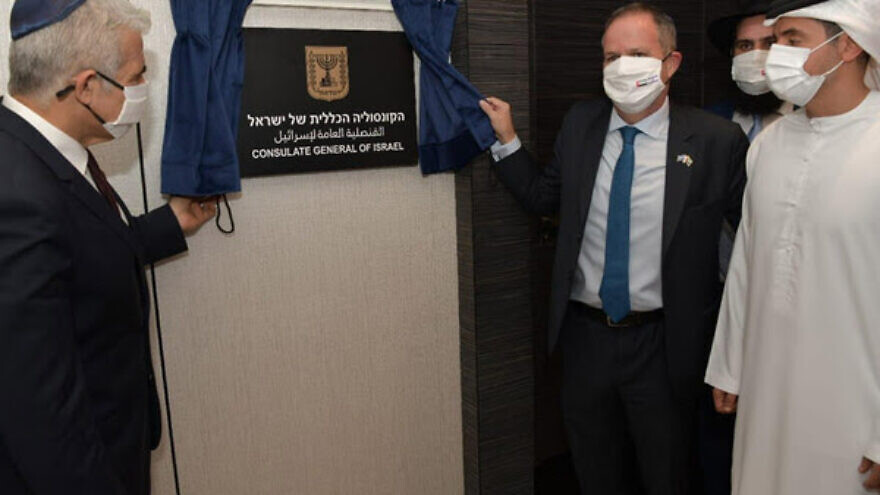 (June 30, 2021 / JNS) Israeli Foreign Minister Yair Lapid said on Wednesday during his visit to the United Arab Emirates that this “is just the beginning” for peace deals in the region.

“Our hand is outstretched … I hope this visit is the first of many and that together with our new friends we continue to make history in the entire region,” he said.

Lapid is the first Israeli cabinet minister to visit the country since the Abraham Accords agreement last year normalized relations also with Bahrain, Sudan, and Morocco.

The foreign ministers of Israel and the UAE also signed an economic agreement on Tuesday dealing with trade and the two countries have started talks on a free trade agreement.

Lapid told state news agency WAM that trade since the normalization agreement was reached tops $675 million. “It is estimated that the bilateral trade potential will multiply many times over in the coming years,” he said.

Lapid also inaugurated the consulate in Dubai on Wednesday.

“Despite all the achievements, we still have an ambition for more,” said Lapid.

The Emirati Minister of State for Artificial Intelligence, Omar al-Olama, said, according to WAM, “Ultimately, the warm ties between the UAE and Israel are slated to grow in many areas, and in the coming period, our two countries will usher in the next phase of bilateral cooperation.”