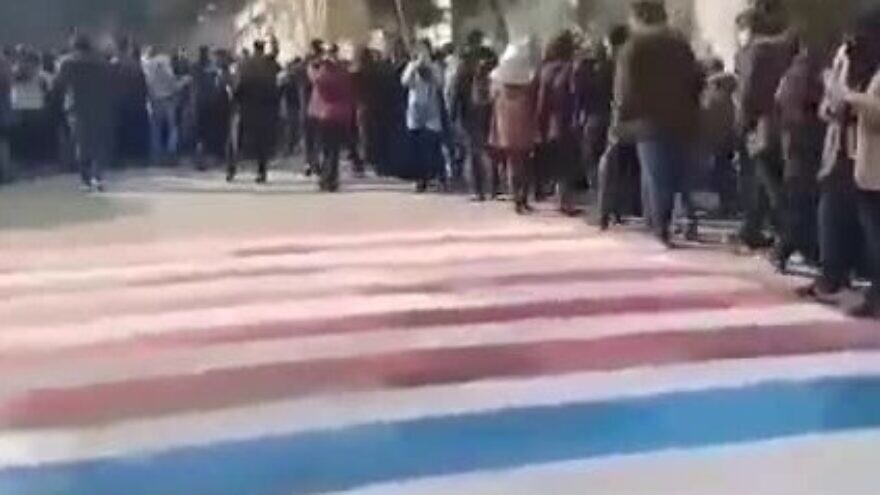 In this still image taken from a video clip, demonstrators at Shahid Beheshti University in Tehran can be seen walking around U.S. and Israeli flags, instead of over them, on Jan. 12, 2020. (MEMRI)
Spread the word.
Help JNS grow!
Share now:

(January 13, 2020 / JNS) In an apparent act of defiance against the Iranian government, hundreds of student protesters at Shahid Beheshti University in Tehran on Sunday refused to walk over U.S. and Israeli flags.

In a video clip of the event translated by MEMRI, students can be seen making efforts to walk around the flags and berating those that do not. According to some reports, demonstrators also chanted, “Our enemy is Iran, not America.”

The demonstration comes in the aftermath of the downing of Ukraine International Flight PS 752, a Boeing 737 that crashed shortly after takeoff in Tehran on Wednesday.

After days of denying responsibility for the attack, Iran finally admitted to shooting down the airliner. Following the admission, thousands of Iranians took to the streets calling for the leadership to resign.

At Tehran’s Amirkabir University on Saturday night, thousands of protesters shouted “Khamenei is over!” and called the government “shameless.”

Israeli Prime Minister Benjamin Netanyahu on Sunday commended the courage of the Iranians who have taken to the streets to demonstrate against the regime.

“They deserve freedom, liberty and the ability to live in security and peace, all of which the regime denies them,” he said at the weekly Security Cabinet meeting in Jerusalem.

U.S. President Donald Trump also conveyed his support for the protesters, writing on Twitter, “We are following your protests closely, and are inspired by your courage.”