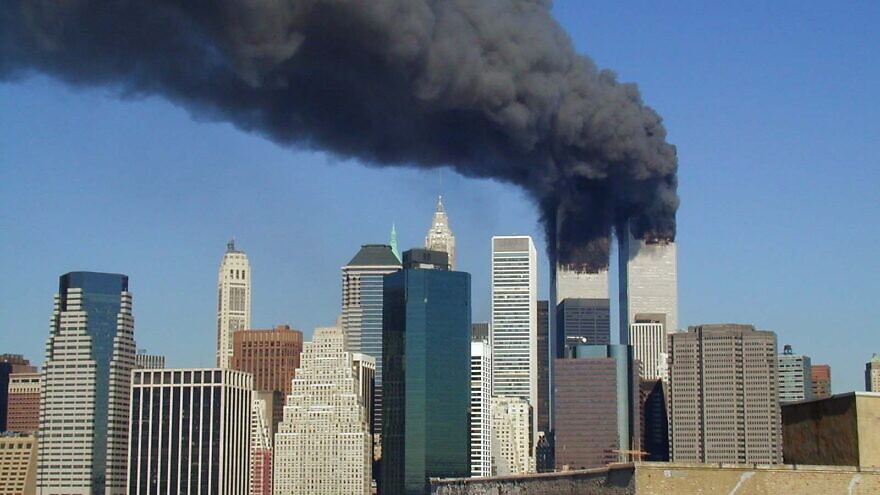 A view of the twin towers of the World Trade Center in New York City on fire after hijacked planes flew into the buildings on the morning of Sept. 11, 2001. Credit: Wikimedia Commons.
Republish this article
1307 WORDS
Spread the word.
Help JNS grow!
Share now:

(September 10, 2021 / JNS) As the world marks 20 years since Al-Qaeda’s terror attacks on Sept. 11, 2001, the unprecedented events and their aftereffects continue to reverberate throughout the region and beyond.

The events in the two decades that have passed since then have had a significant effect on the Middle East and Central Asia, while also seeing ever-growing intelligence cooperation on counter-terrorism between Israel and the United States.

Looking back at those changes, Professor Boaz Ganor, founder and executive director of the International Institute for Counter-Terrorism (ICT) in Herzliya, told JNS that the attacks caused a fundamental shift “in the Bush administration’s approach towards radical Islamic organizations and to all of the elements affiliated with it, or its supporters in the world and the Middle East.”

This, in turn, immediately altered the Bush administration’s approach to Israel, strengthening Israel’s position, as “many in the United States came to regard it as a spearhead and frontline state that that formed a separation line between radical Islamic forces and the Western world,” said Ganor.

“The September 11 attacks found Israel at the height of the Second Intifada, dealing with an unprecedented wave of suicide terrorism, and it was easier for the American administration and public to identify with Israeli suffering and to support Israel’s position,” he added. “Israel’s position grew stronger in the U.S., in the government and among the public as a result of its major experience in dealing with terrorism.”

Yoram Schweitzer, an expert on international terrorism and head of the program on terrorism and low-intensity conflict at the Institute for National Security Studies in Tel Aviv, said that before the United States entered a period of acute distress during 9/11, Israel was closely cooperating with it on issues of defense of security.

“After the attacks, Israel enlisted itself to the cause of assisting its American ally as much as it could,” he added. “Salafi jihadist terrorism started before 9/11, and, of course, it grew stronger with time,” said Schweitzer, noting the attack on the USS Cole in 2000, and the 1998 suicide truck-bombers that struck American embassies in Tanzania and Kenya, creating mass casualties.

“The Israeli expertise lies in familiarity with the Arab Muslim world, Salafi-jihadist activity and in its modus operandi,” said Schweitzer, who also served as a consultant on counter-terror strategies to the prime minister’s office and Israel’s Ministry of Defense. 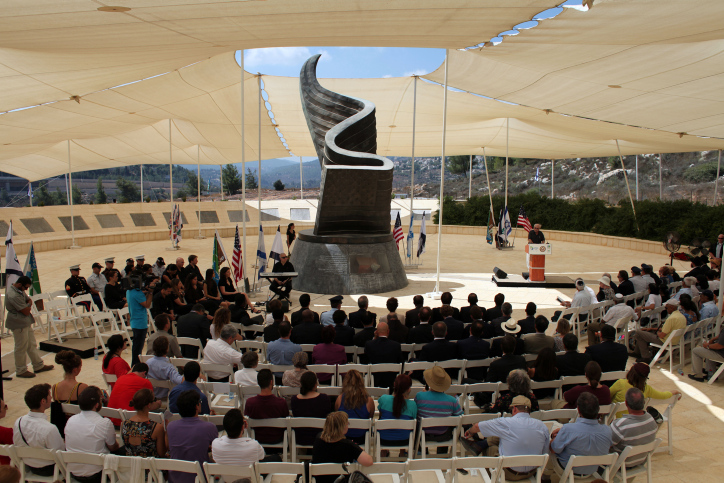 Israelis attend the 11th-anniversary memorial ceremony for the victims of the 9/11 attacks at a memorial monument in Jerusalem Hills on Sept. 11, 2012. Photo by Yoav Ari Dudkevitch/Flash90.

Ganor’s personal experience during 9/11 is a testament to how the attacks transformed America’s perception of suicide terrorism as an overseas threat. Ganor was visiting the United States in September 2001 on behalf of the foreign ministry to explain to various American audiences the difficulties and dilemmas involved in dealing with suicide terrorism. His lecture was titled: “Stopping suicide terrorism: Israel’s challenge,” and he was due to give such a talk in San Francisco on the evening of Sept. 11.

“Naturally, the headline of the lecture became irrelevant on the day that the talk was given—dealing with suicide terrorism was no longer just Israel’s problem but rather that of the entire world, and foremost among it, the U.S. Hence, the knowledge that Israel accumulated became very relevant and important for American security and the world, and demand for it grew significantly,” he said.

Between the years of 1994 to 2000, recalled Schweitzer, Israel went through waves of suicide bombings—a prelude of much larger quantities of attacks in the Second Intifada from 2000 to 2005. That run-up acted as a kind of “basic training” for Israel, creating an asset that was valuable to the United States, which sent delegations to learn about Israel’s security-oriented countermeasures.

“The U.S. ran into this massively in Afghanistan and Iraq afterwards,” said Schweitzer. Israel itself found itself under Salafi-jihadist attack in Kenya, where an Al-Qaeda cell struck an Israeli-owned hotel and tried to blow up an Israeli airliner in 2002.

On the intelligence front, Israel always assisted where it could, though it had limited contributions when it came to Al-Qaeda, said Schweitzer. “Israel is a fixed ally that when asked to help did so.”

This intelligence and military cooperation grew significantly in scale when it came to dealing with Al-Qaeda’s successor, ISIS, in the following decade, noted Schweitzer. “This is due to Israel’s proximity to ISIS’s core area in Syria. Here, Israel could provide a bigger intelligence picture, and cooperate operationally and militarily.”

Israel supported anti-ISIS activity by the United States, as well as by Egypt and Jordan. It also prevented dozens of ISIS attacks overseas, many of them in Europe, former Prime Minister Benjamin Netanyahu said in 2017.

“After 9/11, relations continued to tighten, though not necessarily because of [those attacks] but because Israel was seen as a trustworthy ally,” said Schweitzer.

This trend continues to this day, he added, despite “all of the relationship’s small ups and downs.”

According to Ganor, the most significant consequence for Israel after the attacks came in the shift “in the U.S.’s approach to the Palestinians in general and to [PLO head] Yasser Arafat specifically.”

In his book, Israel’s Counterterrorism Strategy: Originals to the Present, Ganor said that after finding itself in diplomatic conflict with friendly countries, “including a crisis point with the U.S. government when the latter tried to pressure Israel into returning to the negotiating table with Arafat,” Israel’s government, led by Prime Minister Ariel Sharon, and President George W. Bush were “realigned after the president completely lost faith in Arafat’s credibility and effectively adopted the official Israeli position, which was that Arafat was a negative force and irrelevant.”

“The September 11 attacks marked the change and a trend of moving closer, gradually, between Bush and Sharon,” said Ganor. “The Israeli position was accepted in the U.S., and Arafat began to be perceived as someone who encourages terror attacks and who was on the wrong side of history. His denials no longer received much credibility in the U.S., and the straw that broke the camel’s back occurred a few months after 9/11 when the Israeli Navy intercepted the Carine A weapons ship.”

‘How the Taliban’s new rise to power will affect Muslims’

Following the 9/11 attacks, the United States invaded Afghanistan as part of its quest to attack Al-Qaeda and overthrow the Taliban, which hosted it. After 20 years, U.S. forces left on Aug. 31, and as some had predicted, the Taliban have returned to power.

While it’s too early to analyze the repercussions of their takeover of Afghanistan,  their renewed presence will certainly have an effect on regional states and Afghanistan’s neighbors, assessed Schweitzer.

India is deeply concerned by the developments, as is Russia, “which is concerned by how the Taliban’s new rise to power will affect Muslims in Caucasia, Chechnya, Kazakhstan, Uzbekistan or Russia itself. China is worried about the effect on the Uyghurs, and the Iranians are worried about the Taliban’s Sunni fundamentalist Islamism,” said Schweitzer.

These events will encourage a growing number of Islamist organizations and could lead to a new reservoir of Sunni fundamentalists pouring into Afghanistan to obtain terrorist education and training, in addition to terror entities already embedded there, he warned.

Should Afghanistan become another terror training zone, this could potentially threaten Israel, he said. Either way, the influence of the events is already visible, according to Schweitzer.

“In a recent speech, [Hezbollah leader] Hassan Nasrallah spoke for 54 minutes—34 minutes of those were on Afghanistan and how America is an untrustworthy ally,” he said. The ethos that Hezbollah and others are promoting is that determined Islamists can push out America.”

Israel, he said, “needs to be on alert, including to events in Afghanistan and Pakistan, and the significance they hold for our adversaries and how this can encourage their cognitive warfare efforts.”