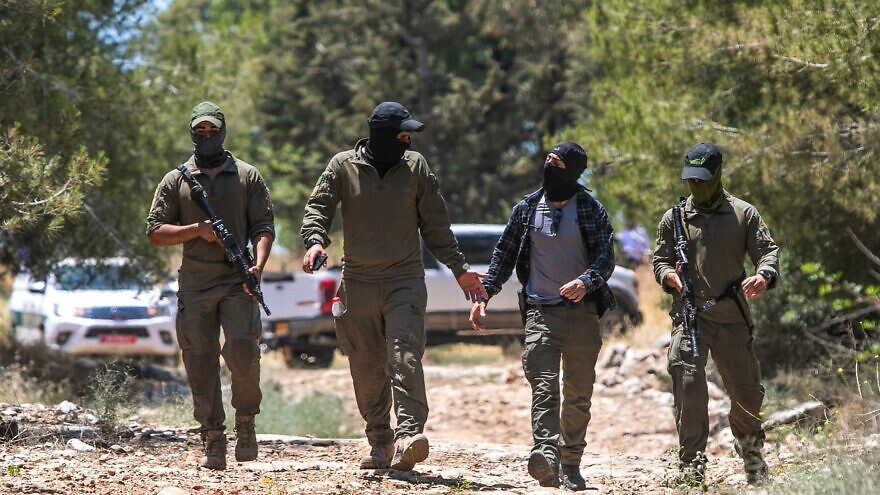 Israeli security forces in a forested area near the city of Elad, where two Palestinians who carried out a deadly terror attack there last week were arrested, May 8, 2022. Photo by Yossi Aloni/Flash90.
Republish this article
1213 WORDS
Spread the word.
Help JNS grow!
Share now:

(May 9, 2022 / JNS) Israel must adopt a more proactive approach if it is to deplete Hamas of its ability to incite Palestinians to terrorism, a senior security scholar has said, including a stepped-up cyber campaign to take down incitement material that is online and fueling violence against Israelis.

In recent weeks, the Israeli defense establishment has detected an unmistakable spike in Hamas’s online efforts to ignite terrorism and unrest, particularly on social-media networks. This is part of the strategy by Hamas’s leader in the Gaza Strip, Yahya Sinwar, to destabilize the West Bank and Jerusalem and inflict Israeli casualties while weakening his domestic rival, the Palestinian Authority—all without risking Hamas’s home turf of Gaza.

Ely Karmon, a senior research scholar at the International Institute for Counter-Terrorism (ICT) in Herzliya, told JNS that the time had come for an all-out offensive cyber campaign to disrupt and remove incitement to hatred and violence on Arabic social-media networks.

“The state has been doing almost nothing offensively on this front and has been waiting for the platforms, like Facebook, to act. The state should not wait; it should take this material down itself,” said Karmon.

In the information campaign sphere, he said, Israel has made a lackluster effort to deflate false Hamas claims that the Al-Aqsa mosque is in danger. “No one is showing footage from inside the mosque on how rioters prepare to attack security forces and what they’re entering the mosque with. No one is showing what the Waqf (the Jordanian Islamic trust in charge of the Temple Mount site) is telling worshippers. It is time for this material to come out,” Karmon said.

He proposed that the Strategic Affairs and Public Diplomacy Ministry take on this project in a focused manner.

On the military front, Karmon said that if Israel did opt for targeted assassinations of Hamas leaders, then it would also have no choice to but launch a significant military offensive designed to target and eliminate Hamas’s leadership.

“The timing is critical because if this government falls before making this decision, a transitional government will take over and then a new government will have to be formed, and the window of opportunity for ordering preparations for such a maneuver will be gone,” he noted.

A return to targeted killings of Hamas leaders clearly means war, said Karmon, adding that “Sinwar is just the symbol because he is the one now talking; he is the commander. Others will come after him. It has to be a succession of targeted killings to reinstall deterrence, and those from the leadership who survive would need to go into the deepest tunnels. They wouldn’t have time to appear in demonstrations or on television.”

Targeted killings played a key role in ending the Second Intifada (2000-05), pointed out Karmon, noting the assassinations of the late Hamas leaders Ahmed Yassin and Abdel Aziz al-Rantisi in March and April 2004. Several other Hamas and Palestinian Islamic senior members were killed by Israel during this time as well.

“Clearly, this will lead to conflict with Hamas. This is not something that has to happen today. But Israel will have to put an end to Hamas’s military wing in the near future,” he argued. “As long as this does not happen, we will remain trapped in this cycle of operations and rocket fire every three to four years, and there will be no chance for a diplomatic process with the Palestinian Authority to develop. Israel is allowing the P.A. to grow weaker.”

Ordering such a maneuver, said Karmon, would result in a fundamental strategic change—meaning that the idea of ordering a targeted assassination of only Sinwar would only be the start of such a transformation if the government ever chose such an option. 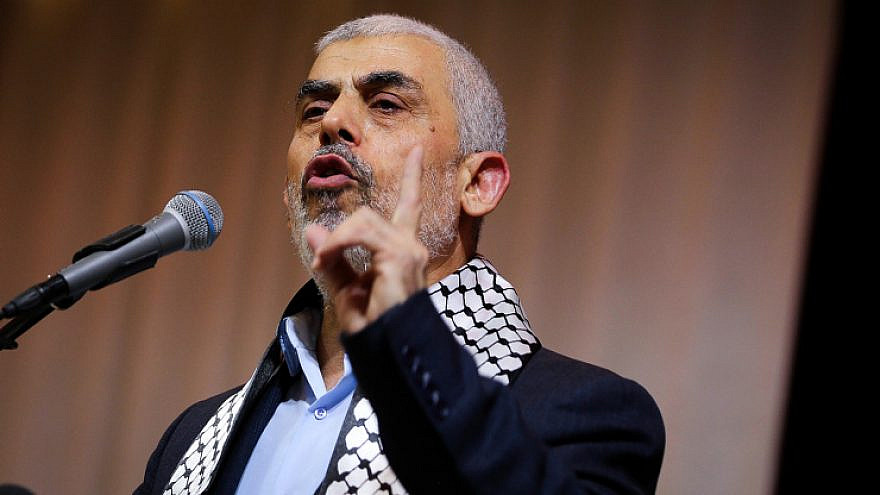 ‘Calling for more and more violence’

In the meantime, Israel has limited its actions against Hamas to the civilian-economic sphere, sealing the Erez Border Crossing between Israel and Gaza, and preventing 12,000 Palestinian workers from access to work in Israel, thereby applying pressure to the Islamist regime in Gaza as a response to its incitement.

In the West Bank and in Israel, security forces are working around the clock to try and disrupt the wave of terrorism.

The joint command room opened in Nahshonim, a kibbutz in central Israel near Elad, inhabited by the Israel Police, the Israel Defense Forces and the Shin Bet intelligence agency led to the capture of As’ad Yousef As’ad al-Rifa’i, 19, and Subhi Emad Subhi Abu Shqeir, 20, from the Palestinian village of Rumana near Jenin, after a 60-hour manhunt that followed their deadly ax rampage through the city, claiming three lives.

At the height of the search, 800 members of the security forces from various units took part under police command. Units included the Maglan and Egoz special military forces, as well as the Miroul Unit, which specializes in tracking down people based on conducting field analysis.

Drones and radars were deployed throughout regions where security chiefs estimated the terrorists were hiding, feeding the command room with intelligence.

“All of this was done with the understanding that the terrorists were between Elad and Rosh HaAyin,” a military official said on Sunday. Police also obtained forensic evidence, helping the search efforts.

“This is an area with many caves and canals—all could be used as hideouts. We pinpointed the area between Route 400 and then up to the security barrier as the polygon we understood they were hiding in,” said the source.

“The initial capture was conducted by a combined team featuring Maglan, Miroul and the Shin Bet. They saw that a bush looked different, and when they got closer, in line with intelligence, they saw that the bush was moving in a breathing pattern. They then called out for the terrorists to surrender,” said the source.

The terrorists crossed into Israel on Independence Day, May 5, through the security barrier before entering the vehicle of one of their victims, Oren Ben Yiftah, riding with him to Elad and killing him. The IDF Central Command Chief, Maj. Gen. Yehuda Fox, and the commander of the Judea and Samaria Division, Brig. Gen. Avi Bluth, have distributed lessons learned to 11 brigade commanders who are actively protecting the area.

Security forces are continuously monitoring incitement directed at Palestinians and Israeli Arabs in mixed cities, the source added, warning that the material online is “calling for more and more violence.”

“The fact that they [the terrorists] entered is a failure of the IDF. We are in charge and were not able to protect in a hermetic way the 430-kilometer [barrier] area. We are debriefing continuously to learn how to do this better,” said the source.

Looking ahead, the military is set to upgrade the security barrier through a range of means, he added, stating that some of the work is already underway.

“We are all of the time balancing between civilian policy to allow civilian life to flourish and for stability, together with security and counter-terrorism operations. In the last month, 19 people have been killed, and the government decided to upgrade the security steps,” he said.

Security forces have also launched a new campaign to prevent Palestinians without work permits from entering Israel, and where possible, to provide more permits to those who pass security screening.