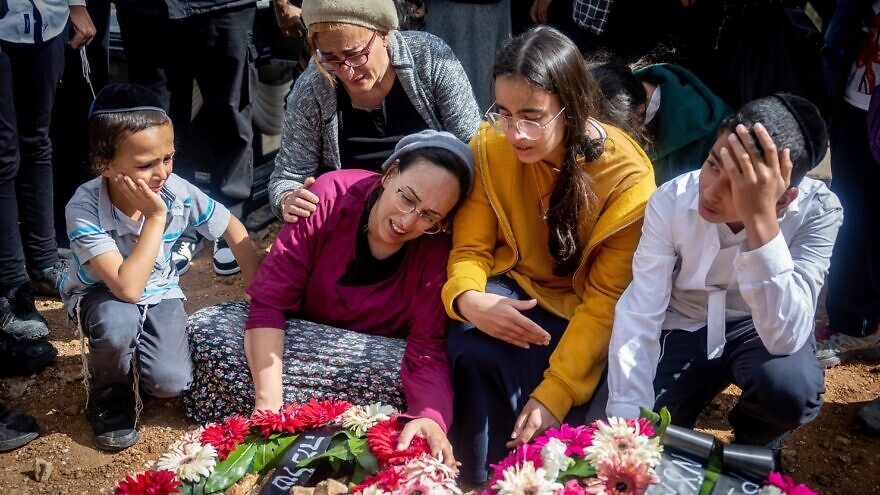 Family and friends attend the May 6 funeral in Jerusalem of Boaz Gol, 49, a father of five who was killed in a terror attack in Elad on Yom Ha'azmaut, Israel's Independence Day, on May 5, 2022. Photo by Yonatan Sindel/Flash90.
Spread the word.
Help JNS grow!
Share now:

(May 6, 2022 / JNS) Israel is mourning three victims of a deadly terror attack on Thursday night on Yom Ha’azmaut—Israel’s Independence Day—in the city of Elad. The terrorists remained on the loose as of midday on Friday with Israeli security forces embarked on a manhunt.

The deceased were identified as Yonatan Havakuk, 44, of Lod; Boaz Gol, 49, of Elad; and Oren Ben Yiftah, 35, of Lod. They were laid to rest on Friday with thousands of people in the country attending their funerals. In total, the three men leave behind 16 orphaned children.

Gol was a mechanic and a member of the Bukharian community. He was returning home from a Torah class in a local synagogue when he was murdered. He is survived by his wife and five children.

In the hours before his murder, Ben Yiftah had been driving a rabbi to a Torah class. According to Chabad.org, he spoke to the rabbi about matters of faith and his own spiritual work. After the trip, he continued to Elad, where he was killed. He leaves behind his wife and six young children.

Havakuk, a father of five, was out looking for his son in the local park when he was murdered. 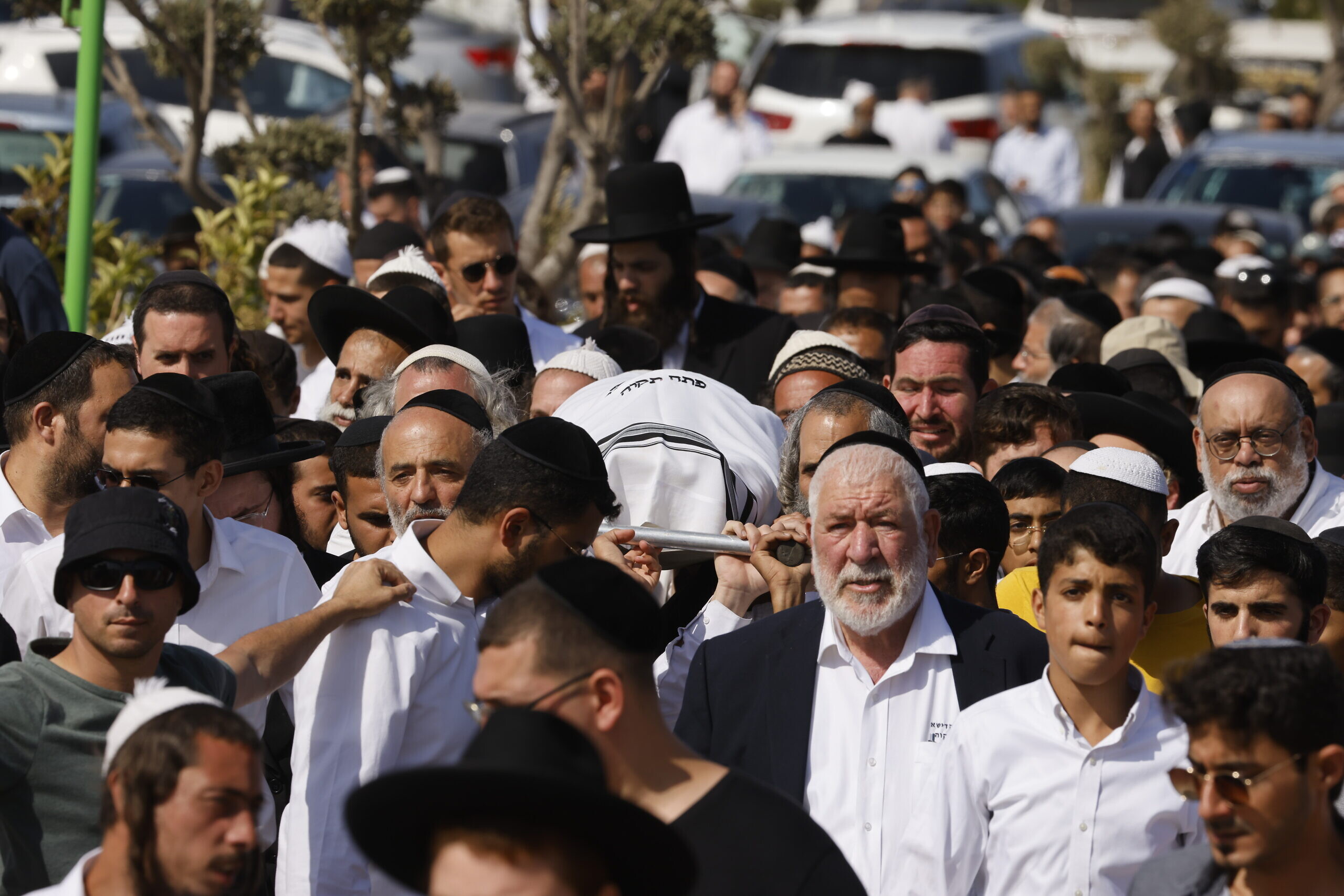 Family and friends attend the May 6 funeral in Petach Tikvah of Yonatan Havakuk, 44, a father of five killed in a terror attack in Elad on Yom Ha’azmaut, Israel’s Independence Day, on May 5, 2022. Photo by Olivier Fitoussi/Flash90.

His wife, Limor, posted on social media in Hebrew (and translated): “My heart refuses to believe I was left alone with five orphans. My heart burned that my soft children saw their father in his final moments. My husband fought against them with great bravery and saved many lives while we fought with them for long minutes. What allows many to escape from the place. May God avenge your blood my dear and beloved husband. You will be greatly missed.”

Several other individuals were injured in the attack, some seriously, including some who were with family members and young children as festivities from Israeli Independence Day were coming to a close.

Said Yaakov Edri, a paramedic with Magen David Adom, “We saw a 38-year-old male with impaired consciousness and serious injuries to his upper body. He was constantly concerned for his children’s welfare and asked us what was happening with them. We provided him with rapid lifesaving treatment and conveyed him to Beilinson Hospital, where he was sedated and ventilated. His wife told us at the hospital that the children had run away from the scene and arrived safely at home.”

Israeli Prime Minister Naftali Bennett held a security briefing on Thursday night, following the attack. He tweeted: “Our enemies have embarked on a murderous campaign against Jews. Their goal is to break our spirit. They will fail. We will get our hands on the terrorists and those who aid and abet them, and ensure that they pay the price. My condolences to the families of those murdered.”

Officials in Israel have said the terrorists were two men, ages 19 and 20, from Jenin who worked illegally in Elad.

Hamas leader in Gaza, Yahya Sinwar, gave a fiery speech just days before the attack in which he called on Palestinians to use a gun, an ax or a knife to kill Israelis.

“Just a few days after the leader of Hamas urged Palestinians to pick up axes and knives and kill innocent Israelis, that’s exactly what happened,” tweeted the Israeli consulate in New York on Friday. “We will not have peace as long as such ‘leaders’ are in the mainstream of Palestinian life.” 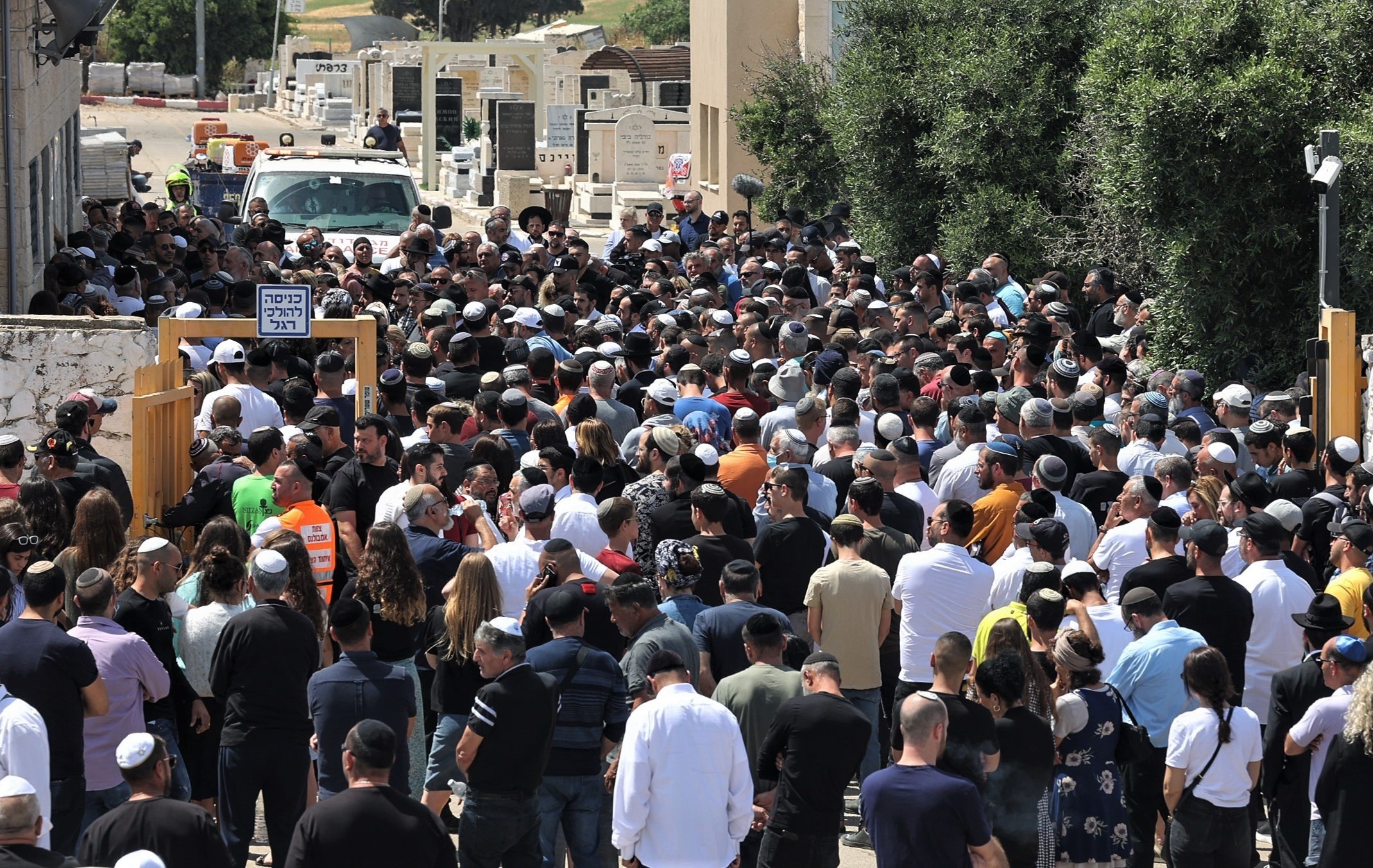 Family and friends attend the May 6 funeral of Oren Ben Yiftah, 35, a father of six who was killed in a terror attack in Elad on Yom Ha’azmaut, Israel’s Independence Day, on May 5, 2022. Photo by Flash90.
Republish this article in your newspaper or website