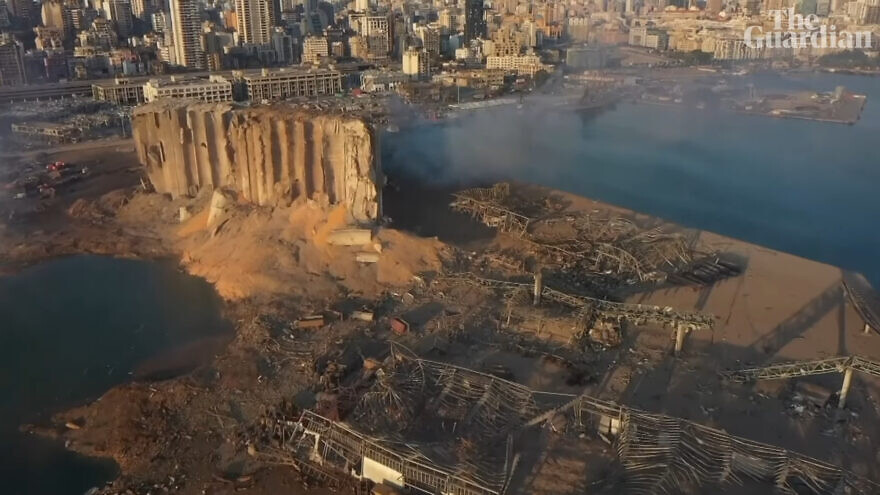 The aftermath of a massive explosion that rocked the Beirut port on Aug. 4, 2020. The blast, the cause of which is still under investigation, was apparently felt as far away as Cyprus. Source: Screenshot.
Spread the word.
Help JNS grow!
Share now:

Israeli Prime Minister Benjamin Netanyahu has approved medical and humanitarian aid to Lebanon and has instructed National Security Council head Meir Ben-Shabbat to speak with U.N. envoy Nickolay Mladenov to determine additional ways in which Israel can help, according to a statement by the Prime Minister’s Office.

IDF Lt. Col. Avichay Adraee, head of the Arabic division of the IDF Spokesperson’s Unit, tweeted: “Under instructions from the defense minister and the foreign minister, Israel has reached out to Lebanon via international diplomatic officials and offered the Lebanese government medical humanitarian aid. Israel has much experience in these areas and has proven it by the humanitarian delegations it has sent throughout the world in recent years.”

Adraee echoed Zilberman’s call to “rise above any conflict.”

Israeli President Reuven Rivlin said on Tuesday that Israel “shares the pain of the Lebanese people in this time of disaster and extends its hand to help at this difficult time.”

Meanwhile, Israel is making preparations to take in UNIFIL personnel wounded in the explosion. As of Tuesday evening, the plan was for the wounded U.N. force members to be taken to the border crossing at Rosh Hanikra and treated at Rebecca Sieff Hospital in Tzfat.

Israeli Welfare Minister Itzik Shmuli tweeted: “The heart breaks at the difficult images coming out of Beirut. Our heart is with the Lebanese people at this difficult time and we will do everything we can to help. When tragedies like these happen, even the most tense border cannot make us forget that we’re all human beings.”

As of Tuesday night, Egypt, Jordan, Turkey and Qatar had also offered to provide humanitarian aid to Lebanon.