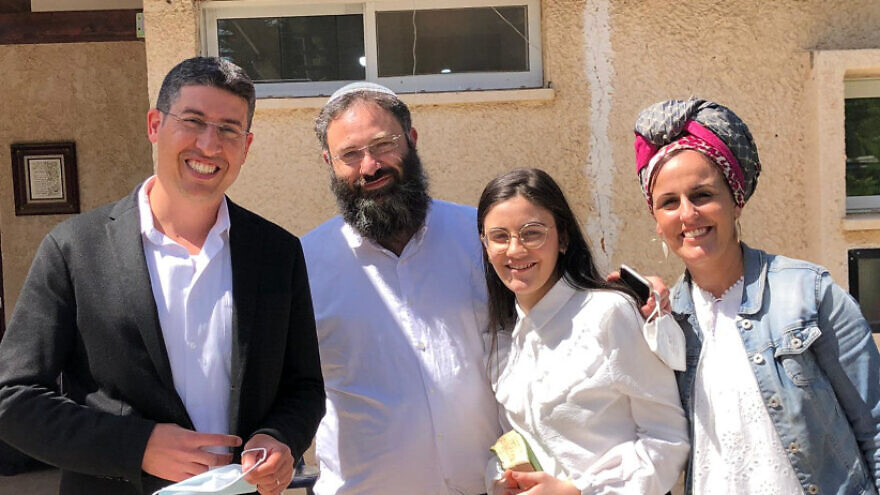 (April 30, 2020 / Israel Hayom) Ruth Cohen, a 16-year-old student from the Barahan Ulpana school in Merkaz Shapira in southern Israel, won the 2020 International Bible Contest in Jerusalem on Wednesday, becoming the first female student in a decade to win the prestigious contest.

The Bible quiz is held annually on Israel’s Independence Day. Like all other Independence Day events, the contest, organized by the Education Ministry, the Israel Defense Forces, the Jewish Agency and the Jewish National Fund, was held without an audience due to restrictions imposed on public gatherings due to the coronavirus outbreak. Participants from outside Israel took part via video link.

Seventy teenagers from 39 countries answered a host of questions about various details from the most obscure biblical books.

Knesset Speaker Blue and White leader Benny Gantz praised the competition for bringing together Jews from all around the globe.

“We need this connection just as we need a tradition that connects our shared history, present and future,” he said. “Jewish heritage is the source of our cohesion. It is the introduction to the State of Israel and the power of the Jewish people,” he said.

Israeli Prime Minister Benjamin Netanyahu, who asked the final question via video link, said that the Bible is not an ancient document, but a vibrant, constantly revitalized book.

“There is no statute of limitations on the Bible, just the opposite—what characterizes the Bible above all is constant revitalization,” said Netanyahu. “Each generation finds answers to the challenges of its time in the Bible. Each generation adds new layers to the acts of the heroes of the book of books.”

Meanwhile, Bible quiz host Avshalom Kor was criticized for referring to event participants who live abroad as being in “exile.”

The Ruderman Family Foundation, a leading organization committed to bridging the gap between Israelis and U.S. Jewry, denounced the remarks as “hurtful.”

In a letter to Israeli Education Minister Rafi Peretz, Foundation president Jay Ruderman and executive director Shira Ruderman accused Kor of “using this respected platform to speak in a condescending manner to the teenagers representing different communities from around the world.”

Peretz, the letter said, should “distance [himself] from these hurtful comments and make it clear [that] the Ministry of Education’s views strengthening Israel’s ties with the Diaspora is an important value and national mission.”

The letter added that such statements “are not only offensive to the participants and their families, but also to the millions of Jews who celebrated Israel’s 72nd Independence Day, out of love to the land, the country and the people. Mr. Kor has contributed and continues to contribute to Israel and the Jewish People in many fields, but this cannot justify offensive behavior. We call on Mr. Peretz to make it clear that his comments do not reflect the position of the education ministry or his own personal opinion.”