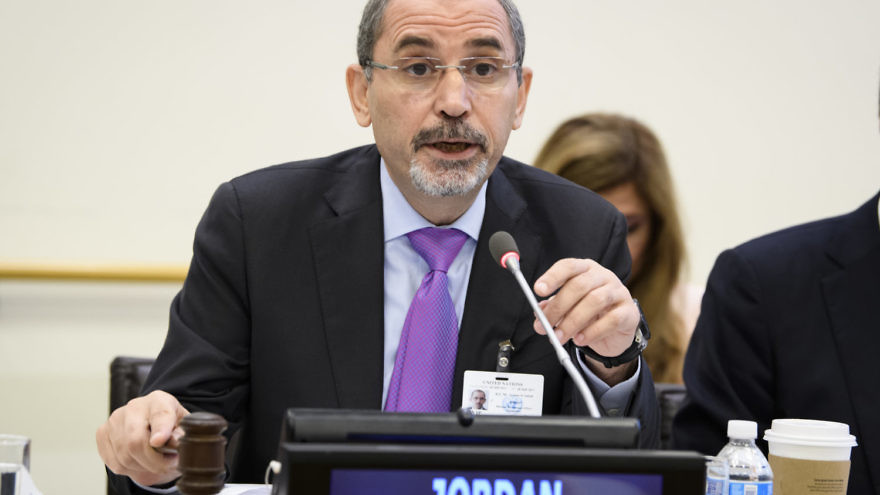 (May 28, 2020 / Israel Hayom) Jordanian Foreign Minister Ayman Safadi told United Nations Middle East envoy Nickolay Mladenov on Wednesday that the Israeli plan to apply sovereignty to large parts of Judea and Samaria and the Jordan Valley must be shelved to “protect regional peace.”

Safadi urged Mladenov to act to “prevent the illegal annexation of Palestinian lands” and stressed the need to “create a new horizon for the resolution of the [Israeli-Palestinian] conflict based on the two-state solution.”

According to a Jordanian Foreign Ministry statement, Safadi briefed the U.N. envoy on Amman’s moves to formulate a clear, practical, international stand as part of the efforts to prevent Israel’s move, which Israeli Prime Minister Benjamin Netanyahu has said he will pursue as early as July.

Safadi urged the international community to unite to halt the move and warned Mladenov of its potentially “disastrous consequences” on regional stability and security.

Among other things, he was quoted as saying that the decision “will kill the two-state solution, fuel the [regional] conflict and make the one-state option a fait accompli.”

He added that “the world will not be able to remain silent in the face of institutionalized apartheid and racial discrimination.”

However, a senior Jordanian official told Israel Hayom that “Jordan will continue to voice its official stance against the annexation plan, mainly through public statements made by the prime minister and foreign minister, but the king will allow the move to take place as long as Jordanian interests are maintained.”

Saudi, Egyptian, UAE and Jordanian officials told Israel Hayom on Tuesday that while the official pan-Arab position opposes any move that allegedly infringes on Palestinian interests, the moderate Arab countries “will not jeopardize their relationship with the Trump administration for the Palestinians,” and that behind the scenes, the move is not being challenged as forcibly as the Palestinians might hope.

PLO Secretary General Saeb Erekat warned on Wednesday that “the next few weeks will determine whether the next decades will be ones of peace and coexistence or of violence and war.”