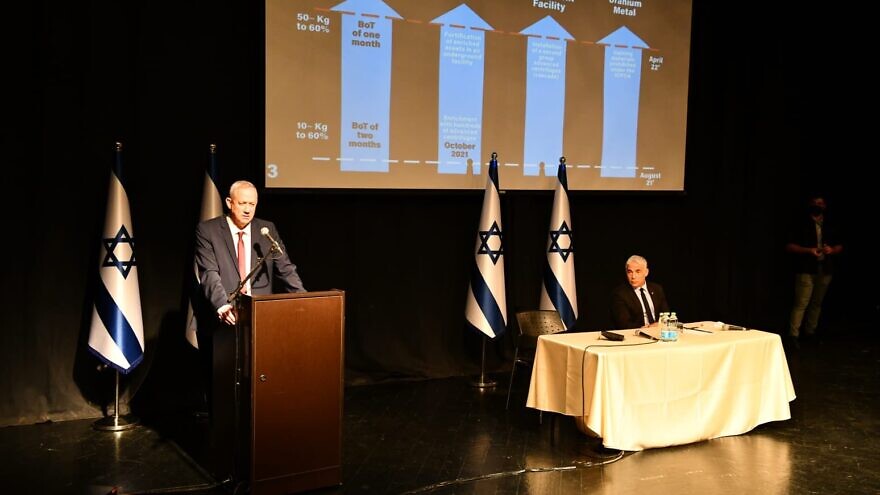 (April 6, 2022 / JNS) Israeli Defense Minister Benny Gantz said on Wednesday that if a new nuclear deal is not signed with Iran, then other measures must be taken.

“If needed, we can move forward with economic pressure, intel, diplomatic pressure, power projection and regional counterterrorism efforts,” said Gantz, according to a defense ministry spokesperson.

Gantz made the remarks during a policy and security briefing for the 80 foreign ambassadors stationed in Israel, together with Israeli Foreign Minister Yair Lapid.

He also presented the diplomats with information on the rapid advance of Iran’s nuclear program.

“Since August 2021, Iran has raced forward. Iran has increased its enriched uranium stockpile to 50 kilograms at [at an enrichment level of] 60%. We are running against [the clock]. The international community must insist on a solid agreement,” he said.

Regarding the recent wave of terrorist attacks in the country, Gantz said that Israel was taking all necessary measures, including preemptive operations, to prevent further attacks.

Gantz concluded his remarks by presenting confidence-building measures undertaken with the Palestinian Authority since “Operation Guardian of the Walls” last May. He also called on the international community to invest in the P.A.

Lapid presented the ambassadors with an overview of last month’s Negev Summit and spoke of the importance of regional cooperation in the fields of security and the economy.

In addition, Lapid provided the ambassadors with information about the humanitarian aid Israel is providing to Ukraine and reiterated Israel’s condemnation of the Russian invasion.

Both Gantz and Lapid emphasized Israel’s condemnation of the invasion and its humanitarian efforts, as well as Israeli Prime Minister Naftali Bennett’s mediation efforts.