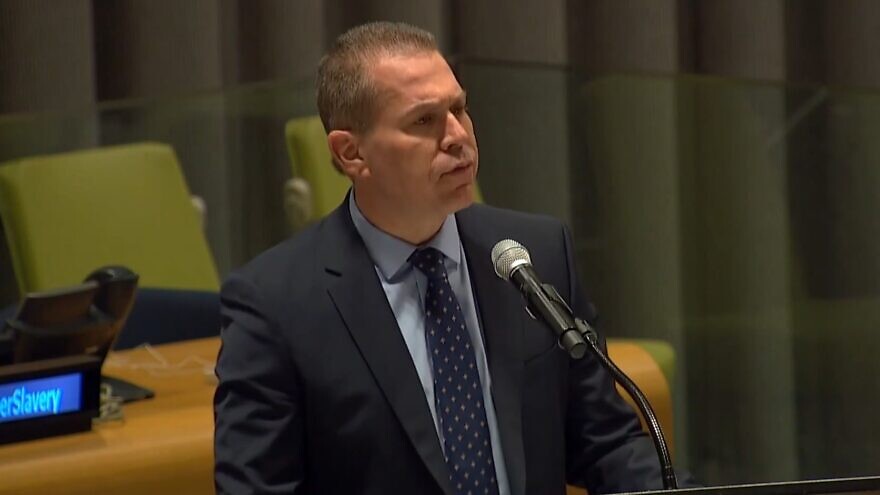 To mark the International Day of Remembrance of the Victims of Slavery and the Transatlantic Slave Trade on March 25, the Permanent Mission of Israel to the United Nations initiated a special event on Tuesday that featured excerpts from the Israeli film “Equiano.Stories.” Source: Screenshot.
Republish this article
1065 WORDS
Spread the word.
Help JNS grow!
Share now:

Jews will celebrate and commemorate their exodus from slavery during the upcoming Passover holiday, utilizing the Haggadah to retell to their children the biblical story.

Would the Israelites have been granted their freedom earlier had social media existed to capture the injustice? Would it have changed things for an African child in the 1700s who was sold into slavery?

To mark the International Day of Remembrance of the Victims of Slavery and the Transatlantic Slave Trade on March 25, the Permanent Mission of Israel to the United Nations initiated a special event on Tuesday that featured excerpts from the Israeli film “Equiano.Stories.” It presented the story of Olaudah Equiano through Instagram stories. Equiano was abducted and sold into slavery as a child in 1756 before securing his freedom and working to end the slave trade in Great Britain.

“We, the Jewish people and the State of Israel feel sympathy towards victims of racism and slavery because our people endured the same kind of suffering as we’re going to commemorate two weeks from now during Passover,” Gilad Erdan, Israeli Ambassador to the United Nations, told JNS. “I think it had an extremely important effect that the formal event to commemorate the victims of slavery was focused on an Israeli production and it was based on the initiative of the Israeli mission to the U.N., and it exposes the truth about all of our enemies and political rivals who are trying to brand Israel as an apartheid state and the truth is stronger than anything else.”

Showing the importance of the Israeli initiative, the president of the U.N. General Assembly, Abdulla Shahid, decided to hold the event as an official one for all U.N. members.

“Equiano.Stories connects us to the past in a way that is often hard to achieve, particularly as we are prone to see the past as something long ago, distant and unrecognizable,” said Shahid.

Addressing participants, Adams drew parallels between the evils shown in the film and global ills today, such as accelerating climate change, hunger and conflict.

Urging multilateral action, he said that the world body “must be more than a symbolic building; it must be a rallying cry.”

United States Ambassador to the United Nations Linda Thomas-Greenfield spoke remotely, and technology and media entrepreneur Mati Kochavi, who produced “Equiano.Stories,” addressed the gathering, which included former NBA All-Star Amar’e Stoudemire, a convert to Judaism. The permanent representatives of Jamaica and Senegal, along with the permanent observer of the African Union, also spoke, as did the chair of the Task Force on Addressing Racism and Promoting Dignity for All in the United Nations Secretariat, U.N. Under-Secretary-General Catherine Pollard.

‘His words were his power’

“Equiano.Stories,” an excerpt of which was featured during Tuesday’s event, reimagines the childhood saga of Olaudah Equiano, an 11-year-old boy living in a vibrant Igbo village in West Africa in 1756. Deeply connected to his family and community, he happily documents his life in the village through stories shared with his followers. But one day, Equiano and his sister are kidnapped from their home. They are separated, and Equiano is transported alone, by foot, to Africa’s Western shore. There, he is made to board a slave ship.

Equiano would go on to buy his freedom and wrote compellingly about his experiences in the book, The Interesting Narrative of the Life of Olaudah Equiano, Or Gustavus Vassa, The African. The film tells his tale as a modern-day self-recorded, first-person account, within the format of Instagram stories, using video, still images and text, highlighting the struggle and strength of African people during the Middle Passage—the stage of the Atlantic slave trade in which millions of enslaved Africans were forcibly transported to the Americas.

“When George Floyd was murdered, the horrific video, captured on a cell phone, shocked the world into action. And as [Russian] President [Vladimir] Putin’s forces unleash senseless violence on Ukraine, the images we’re seeing and the stories we’re reading in real time have rallied the global community to stand united with the people of Ukraine,” said Thomas-Greenfield. “We see these same dynamics play out in brutal conflicts and under repressive regimes around the world. Activists and everyday civilians who are able to share their stories and call on others to help, and it really can make a difference.”

“In Olaudah Equiano’s time, they didn’t have smartphones or social media. But he used the tool he had at his disposal to share his story with the world: his words. His words were his power,” she emphasized.

‘The commonality is our past’

One of the writers and directors said she saw her own Israeli identity in Equiano’s story, which is one of the aspects of the saga that drew her to the film project.

Erdan, who has placed a priority on strengthening ties between Israel and African countries in the United Nations, said that Tuesday’s event was designed to emphasize common values in the fight against racism and anti-Semitism.

“Both of our fights emanate from a history of enslavement. … The commonality is our past, and this is what makes Israelis so empathetic to Africans, whose equality, dignity and self-determination was stolen in the slave trade,” said Erdan. “This commonality is why it is so important for Israel’s Mission to the United Nations, and for me as its ambassador, to have initiated today’s presentation.”