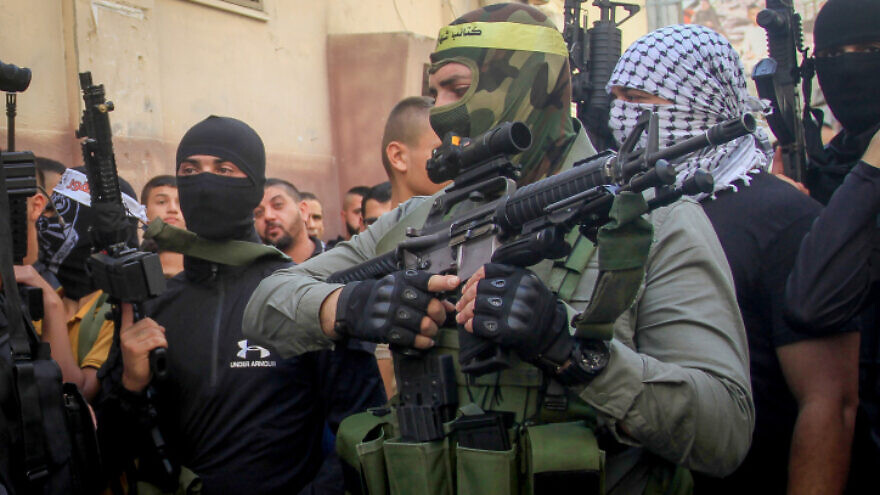 Palestinian gunmen and mourners attend the funeral of two Palestinian gunmen who were killed during clashes with Israeli forces near the Hawara checkpoint, in the West Bank city of Nablus, October 28, 2022. Photo by Nasser Ishtayeh/Flash90.
Spread the word.
Help JNS grow!
Share now:

(November 3, 2022 / JNS) The Israel Defense Forces ended its closure of Nablus (Shechem) on Thursday, after nearly 10 full days of relative calm in the city.

“In accordance with a routine situational assessment in Judea and Samaria, it has been decided that the general closure that was imposed on the entrances and exits to Nablus will be lifted,” the IDF announced in a statement.

The decision follows an Israeli counter-terror operation in the city on Oct. 25 against the newly-formed Lions’ Den terror group. Five terrorists were killed, including group’s leader, Wadi al-Houh.

Two days later, Israeli media reported that six members of the group had turned themselves in to the Palestinian Authority, with five more in negotiations to do so.

Lions’ Den is responsible for killing IDF soldier St.-Sgt. Ido Baruch, as well as an attempted attack in Tel Aviv (thwarted by the Israel Police) and the planting of an explosive device at a gas station in Samaria, according to the Israeli military.

The group also attempted to carry out a shooting in the Jewish community of Har Bracha near Nablus, and hurled a grenade towards IDF soldiers in another incident in Samaria, and is behind multiple shootings throughout Nablus.