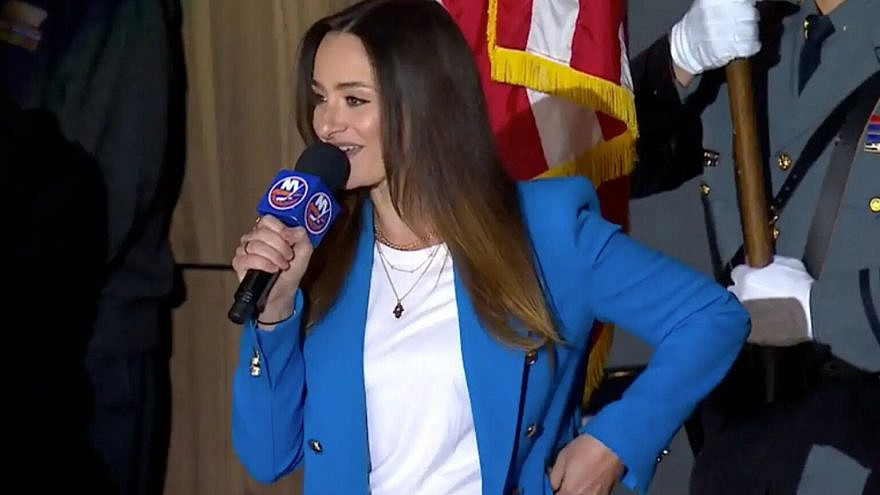 (January 25, 2023 / JNS) An acclaimed American-Canadian-Israeli singer is on her way to Dubai to perform in Arabic at a Holocaust remembrance ceremony.

The non-profit organization “Together—Vouch For Each Other,” led by Israeli-Arab activist Yoseph Haddad, will host an International Holocaust Remembrance Day ceremony for the Arab world on Thursday.

Hundreds of leaders from Muslim countries, including the United Arab Emirates, Bahrain, Saudi Arabia and Syria, are expected to attend, the organization says.

Raviv, raised in Montreal by Israeli parents, made aliyah last year. She is well-known in the U.S. for national anthem performances at sporting events. She’ll be part of an Israeli delegation of 20-30 people heading to the UAE for the ceremony and surrounding events in both Dubai and Abu Dhabi.

“The main goal of the ceremony is to increase awareness and to bring Holocaust education to the forefront in the Arab world since the Abraham Accords. And this is supposedly the first time this is happening,” Raviv told JNS.

The ceremony will include a eulogy, the lighting of memorial candles and collaborative performances.

Raviv, whose maternal grandparents are Holocaust survivors, immigrated to Israel from New York in July 2021. She spent a decade in the Big Apple, performing at major sports venues, including those of the NFL, NBA, NHL and MLS. She sang “The Star-Spangled Banner” at a New York Jets game a few weeks ago.

Raviv said she started exploring singing in Arabic about a year ago and has been training in Israel.

“I go to a cultural music center in Tel Aviv. I learned not only Arabic music and theory, but I’ve performed with ensembles, and we put on shows, like big orchestras,” she said. “There are interfaith musicians including Jews, Christians and Muslims. There’s also other cultures that we’re exposed to as well, through Ladino, Persian and classical Arabic music.”

Raviv, whose father was born in Morocco, previously traveled to Dubai as a tourist, though this will be her first time venturing to Abu Dhabi.

“I’m very excited to perform. It’s hard to put into words,” she said. “But I think that it’s something that is incredible. We are all making history, and it’s exciting to be a part of that.”