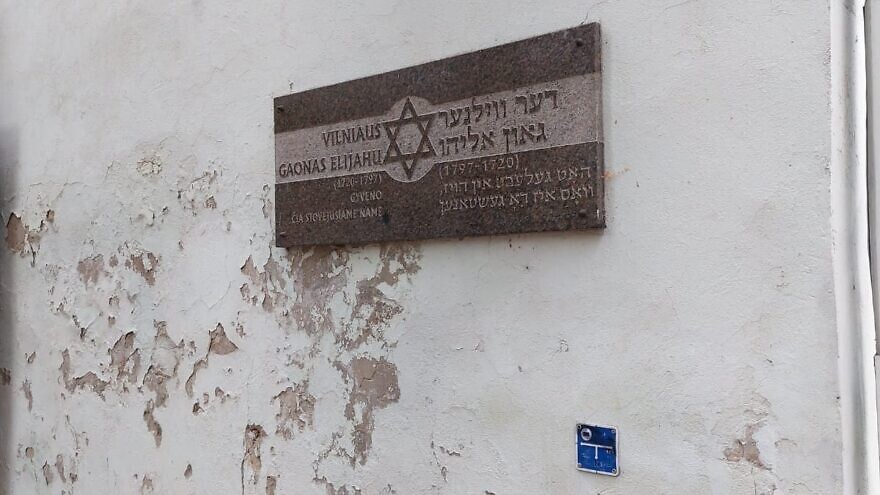 Vilna’s largest synagogue, which was damaged during the Holocaust in a Nazi bombing raid and destroyed completely by the Soviets after the war, has been replaced by a nondescript, two-story building and nothing but a plaque and sculpture of the Vilna Gaon remain in the area. Credit: Israel Kasnett.
Republish this article
1791 WORDS
Spread the word.
Help JNS grow!
Share now:

(October 6, 2022 / JNS) Lithuania’s capital, Vilnius (Vilna), is a thriving European city where young couples push babies in strollers down “Jewish Street” now lined with cafe tables. In one courtyard, where Jewish families once lived, a bright yellow Porsche is parked amid the crumbling pre-war brick walls.

Like many other such European cities, Vilnius retains a dark past. While the Nazis wiped out most of its Jewish inhabitants, channeling them first through two ghettos and then killing them in the nearby Ponary Forest, they didn’t accomplish their heinous crime alone. Lithuanian citizens are well-documented pre-empting Nazi aktions and participating in them directly. While this is an uncomfortable narrative for Lithuania’s youth today, it must be told so future generations understand that “never again” not only means the Jewish people will never again remain defenseless, but that the average person must never again sink to such low levels of hatred and bestiality as many Lithuanian citizens did in World War II.

Famed Holocaust survivor Elie Weisel himself once argued that the Lithuanians had been part of the problem, not the solution. Michael MacQueen, chief of Investigative Research in the United States Department of Justice’s Office of Special Investigations (OSI), where he investigates crimes committed in German-occupied Lithuania, Belorussia and Poland, illustrated through case studies that Lithuanians were willing and often eager to collaborate in the “Final Solution.” He detailed several factors motivating those directly involved in killing Jews and noted that many killings and lootings occurred in rural villages, where Lithuanians often inflicted brutal violence on their longtime Jewish neighbors, according to the United States Holocaust Memorial Museum.

“While the guiding hand was almost invariably German, in a high percentage of cases, the bloody hand of the murderer was Lithuanian,” MacQueen wrote.

The Soviet suppression of crimes against Jews, both by Nazis and Lithuanian collaborators, was documented by Masha Rolnick, who wrote I Must Tell, a diary of the life of a 14-year-old girl in the Vilna Ghetto.

According to Nora Levin in her book The Holocaust, “Three hundred Lithuanians were found to serve on Einsatzgruppe A. At the climax of the mass shootings of Jews, there were eight Lithuanians to every German in Stahlecker’s firing squads…Altogether 136,421 people were liquidated in a great number of single actions… By the end of December 1941, 30,000 Jews in Vilna had been killed.”

Vilnius’s Jewish influence until the 20th century has led to it being described as the “Jerusalem of Lithuania.” Napoleon named it “the Jerusalem of the North” as he was passing through in 1812. The “Vilna Shas” became the standard for the printing of all editions of the Talmud until today. A major scholar of Judaism and Kabbalah who lived in Vilna was Rabbi Eliyahu ben Solomon Zalman, the famed “Gaon of Vilna” (1720-97), who astounded and impressed the Jewish world when at age 6, he delivered a homily in Vilna’s largest synagogue. The synagogue, a magnificent and grand structure built in the 17th century, was damaged during the war in a Nazi bombing raid and destroyed completely by the Soviets after the war. It has been replaced by a nondescript, two-story building and nothing but a plaque and sculpture of the Vilna Gaon remain in the area. The nearby Vilna Gaon Jewish State Museum is dedicated to the history of Jewish life in Lithuania.

Eleventh-grade students Guste Butenaite, Laura Rakauskaite and Rimante Skarnulyte, along with their teacher Diana Murauskiene and headmaster Zilvinas Damijonaitis, met with JNS in the quiet lakeside city of Vievis, on the outskirts of Vilnius, before the annual commemoration of Vilna’s liquidation on Sept. 23, to discuss what they learn about the Holocaust.

The students said that as part of their Holocaust studies in school, they created an interactive map that showed where Jews had lived throughout the country. They also said they had had the opportunity to meet Holocaust survivors and watch videos of survivors’ testimonies on YouTube.

The headmaster explained that while in some schools, there is a lack of readiness or competence to teach such sensitive subjects, many students in other schools are actively involved and eager to learn about the Holocaust. There is a team of teachers who work together with the students and, in addition to classroom lessons, the teachers also engage the students in interactive projects, theater productions, and field trips to memorial sites.

And while there exists a heavy focus on the Holocaust, the students said they also learn about Judaism in the 21st century, as well as Jewish life, culture, and traditions and they are learning about what causes anti-Semitism and how to minimize or eradicate it.

This is, of course, encouraging, but it can never be enough. 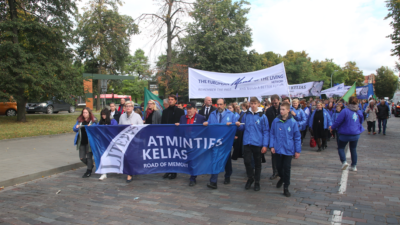 Lithuania’s Prime Minister Ingride Simonyte told JNS there is always more to do in terms of Holocaust education.

“The main point is to be constant,” she said. “Not to just do a lot now and then nothing. It is not the intensity that matters, but the consistency.”

She said it is “so easy to forget, especially since we have fewer people who are living witnesses” who can recount the horrors of the Holocaust.

She also said that reading a book about the Holocaust is not sufficient since one’s imagination “is not the same as hearing the memories of a witness.”

“There are things in history that maybe are not that important to remember, such as all the names of the battles or the dates or how many people were on what side,” she said, “but there are some things that are persistent because some atrocities in the history of humanity happened because of the same thing—hatred.”

Simonyte emphasized there must be a “cultivation of intolerance to hatred—a complete ban of thinking that some people might be worse than you or that you might be better than other people,” because this sense of superiority “is something that sooner or later, unfortunately, turns out to become what the Holocaust was.”

Emanuelis Zingeris, chairman of the International Commission for the Evaluation of the Crimes of the Nazi and Soviet Occupation Regimes in Lithuania, and the only Jewish member of the country’s parliament, told JNS there are a number of ways Lithuania can and should keep the Holocaust alive in everyday discussion.

First, the effort at Babyn Yar in Kyiv, Ukraine, where an educational center and museum is being built to commemorate the Jews murdered there, should be replicated across Poland and in Lithuania.

Second, Lithuania’s government must ensure that any commemoration of the Holocaust must include that Lithuanian collaborators were involved and it was not just a Nazi crime.

Third, rescind recognition of Lithuanian heroes who were in fact collaborators with the Nazis. A number of Lithuanian citizens recognized for their bravery against the Soviets had also colluded with the Nazis and were directly responsible for the murder of Jewish Lithuanians.

Zingeris listed Silvia Foti as an example of a woman who was raised on reverent stories about her hero grandfather, a martyr for Lithuanian independence, and an unblemished patriot. Jonas Noreika, remembered as “General Storm,” had fought the Germans and Soviets in World War II, surviving two years in a Nazi concentration camp only to be executed in 1947 by the KGB. Foti, who grew up in Chicago, was treated like royalty in her tight-knit Lithuanian community.

But in 2000, when Foti traveled to Lithuania for a ceremony honoring her grandfather, she learned that her grandfather had been a “Jew-killer” and was not the hero she was raised to believe he was.

Her book, The Nazi’s Granddaughter: How I Discovered My Grandfather Was a War Criminal, is a gripping account of her discovery that her grandfather was a Nazi collaborator responsible for killing Jews.

Zingeris expressed his gratitude to the International March of the Living for helping to bring attention to Lithuania’s role in the Holocaust and encouraging Holocaust education. Zingeris also noted that his Commission sent 300 teachers to Yad Vashem to learn about the Holocaust.

Each year, on Jan. 27, on International Holocaust Remembrance Day, the date of the liberation of Auschwitz in 1945, Lithuania holds a national conference of its tolerance centers when teachers and students meet to discuss the Holocaust.

“We must continue to bring knowledge from books and exhibitions, from the intellectual level to the masses, through education,” he said.

March of the Living is an international educational organization that works to teach about the Holocaust and its lessons among youth, both Jews and non-Jews, from around the world. The organisation’s chairman, Dr. Shmuel Rosenman, told JNS that the Lithuanian government’s commitment to Holocaust education is a good example of how a country should deal with its past. “Nothing can bring back the large and culturally rich Jewish community of Lithuania that was murdered in the Holocaust,” he said. “But we can teach about the great heritage of the Jewish community, what happens when anti-Semitism and hatred are allowed to run rampant, and how important it is not to stand by when genocide occurs.”

Račinskas said he believes the younger generation is “growing more open and mature” and said he hopes the International Commission’s efforts at education and commemoration will have an effect.

“People are cultivating a narrative in their closed circle of family and friends. We are afraid to leave our own ‘ghettos of memory,’” he said. “The point is to leave our ‘ghettos’ and meet others from their own ‘ghettos.’”

On Sept. 23, the day Lithuania commemorates the Nazi liquidation of the Vilnius ghetto, a large crowd including leaders, diplomats, representatives of the International Commission and the International March of the Living as well as school students, teachers and principals retraced the footsteps of Vilna’s Jews and marched from Vilnius’s historic Ghetto Victims (Rūdninkai) Square to the train station where they took the train to the Ponary Forest.

Holocaust survivor Saadia Bahat addressed the crowd at the ceremony and recounted his story.

“We were pushed to the ghetto in 1941,” Bahat said. “I happened to be among other prisoners of the ghetto who were taken by trucks to the railway station. The train had to go to a camp in Estonia, but it started moving towards Ponary and we wept. Everyone wanted to kill us. Today, when we are on the train to Ponary, none will weep. I am so thankful that I am standing here in front of you, and nobody wants to kill me.”