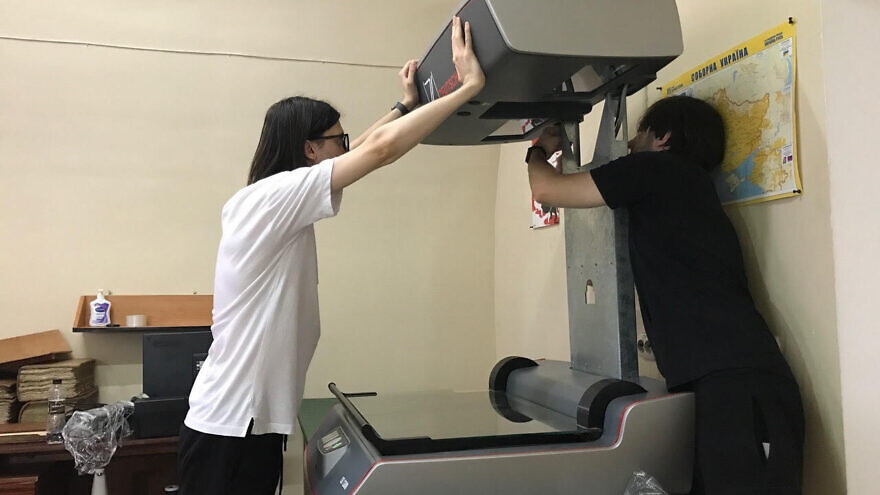 Staff members at the Central State Historical Archives of Ukraine in Lviv prepare to use the donated scanner. Photo: Courtesy of JewishGen.
Spread the word.
Help JNS grow!
Share now:

(September 21, 2022 / JNS) JewishGen, a nonprofit organization and website for Jewish genealogy, announced on Tuesday a partnership with the Central State Historical Archives of Ukraine in Lviv to help the latter preserve historical records that are at risk of being lost or destroyed amid the country’s ongoing war with Russia.

JewishGen is an affiliate of New York’s Museum of Jewish Heritage – A Living Memorial to the Holocaust, which has donated to the Archives a planetary scanner—a device used for scanning rare books and other easily damaged documents—so archivists in Ukraine can digitize more of their records.

The Central State Historical Archives of Ukraine in Lviv is one of the largest and oldest archives in the country and holds more than 1.1 million files, dating back to the 12th century. It is located inside the 17th-century former Bernardine Monastery and Royal Arsenal in the city’s Old Town, which is a UNESCO World Heritage site.

Olesya Stefanyk, director of the Lviv Archive, said archivists are “extremely grateful” for the scanner.

“Ukrainian archivists are doing everything they can to preserve the historical heritage, cultural assets and documentary memory of our nation,” Stefanyk explained. “Some of our employees are currently defending Ukraine in the ranks of the Armed Forces of Ukraine; others are making every effort at their workplaces. JewishGen’s support is not only an invaluable contribution to ensuring the preservation of Ukraine’s historical heritage, but also an important moral support.”

The New York museum is also financially supporting the digitization of documents about Jewish communities during the late 18th through late 19th centuries in the region historically known as Galicia, which is now western Ukraine and southeastern Poland.

“We are prioritizing this work for towns and villages in which few or no Jewish birth, marriage or death records are known to have survived, making these documents especially valuable,” said JewishGen Executive Director Avraham Groll. “Jews were once a large percentage of the population in these areas…Digitizing these documents on a large scale is important not only to ensure their preservation but to organize them in such a fashion as to make them more easily and freely accessible to all.”