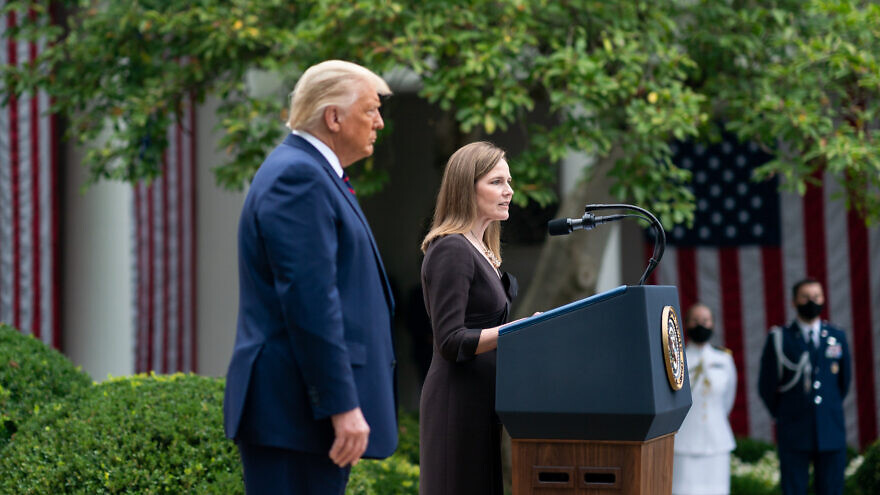 Ginsburg, a heralded liberal judicial, feminist and Jewish icon who was the second woman to serve on the nation’s highest court, died on Sept. 18 at the age of 87 from “complications of metastatic pancreas cancer,” according to a statement from the Supreme Court shortly after her death.

The Jewish Coalition for Religious Liberty applauded the nomination, which, if confirmed, would strengthen the conservative bent on the nation’s highest court with a 6-3 majority—two of whom, Justices Neil Gorsuch and Brett Kavanaugh, were appointed under Trump in 2017 and 2018, respectively.

“Hopefully, she will help return the Supreme Court’s jurisprudence to a consistent application of the original public meaning of the Constitution,” said JCRL in a statement. “This year, the Supreme Court will hear several cases with important implications for Americans’ religious liberty. It is imperative that the court make such momentous decisions at full strength.”

“Judge Barrett faced unconscionable anti-Catholic bigotry during her confirmation to sit on the Seventh Circuit Court of Appeals. Unfortunately, such prejudice is not new to judicial confirmations. Justice Louis Brandeis faced bigotry following his nomination,” continued JCRL. “We sincerely hope that this time Judge Barrett’s confirmation is not marred by such irrational hatred.”

During Barrett’s 2017 nomination to be a judge on the Seventh Circuit Court of Appeals, Senate Judiciary Ranking Member Dianne Feinstein (D-Calif.), who is Jewish, told Barrett, referring to her Catholic faith, “The dogma lives loudly within you, and that’s a concern.”

In response to U.S. President Woodrow Wilson nominating Brandeis to the Supreme Court, former U.S. Attorney General George Wickersham labeled Brandeis’s supporters as “a bunch of Hebrew uplifters,” while Sen. Henry Cabot Lodge (R-Mass.) was reported to have said, “If it were not that Brandeis is a Jew, and a German Jew, he would never have been appointed.”

Nathan Lewin, who worked with Barrett at a law firm, and serves as the national vice president of the National Jewish Commission on Law and Public Affairs, told JNS that he is “enthusiastic” over her nomination “both because her attitude towards religious liberty and the Free Exercise Clause appears to portend greater recognition of the right to religious observance.”

Rabbi Dov Fischer, Western Regional vice president of the Coalition for Jewish Values, as well as a law professor and former clerk in the U.S. Court of Appeals for the Sixth Circuit, told JNS:  “Judge Coney Barrett is a distinguished law-school professor and mentor, and has established a splendid record on the United States Court of Appeals for the Seventh Circuit. She is quite worthy of a seat on the United States Supreme Court.”

Concerns over status of health care

Groups such as the Jewish Democratic Council of America and Democratic Majority for Israel have objected to Barrett’s upcoming nomination to the nation’s highest court.

“Jewish Democrats reject President Trump’s nomination of Judge Amy Coney Barrett for two reasons. First, the American people will vote in 38 days on the next president of the United States, and, in accordance with the standards set by Republicans in 2016, the winner of that election should pick the next Supreme Court justice,” said JDCA executive director Halie Soifer in a statement. “To deny the American people a say in this critically important period when some Americans have already voted is the height of hypocrisy and an unconscionable miscarriage of justice.”

However, in accordance with the U.S. Constitution, the president nominates and the Senate does what the Constitution calls “advice and consent” by voting to either confirm or reject the nominee. That did not come to pass with the nomination of Merrick Garland by former President Barack Obama, 11 months prior to the 2016 presidential elections.

Soifer also said that Barrett “stands in opposition to everything … Ginsburg fought for throughout her career, and threatens to reverse decades of progress with regard to access to affordable healthcare, equality, separation of church and state, and reproductive rights. Barrett’s views on the law are far outside the mainstream of public opinion and are contrary to the views of an overwhelming majority of Jewish Americans.”

Soifer cited the Supreme Court scheduled to hear on Nov. 10 the case that could overturn the Affordable Care Act, also known as Obamacare, in which “the rushed appointment of Barrett will directly threaten the health care of millions of Americans amid an unprecedented public health crisis.”

In a statement, DMFI president and CEO Mark Mellman said, “With the nomination of Judge Barrett, President Trump and Republicans come ever closer to achieving their long-desired goals for the Supreme Court: eliminating the Affordable Care Act and its protections for those with pre-existing conditions; overturning Roe v. Wade and outlawing all abortions; and undermining democracy by deciding Trump is ‘re-elected,’ regardless of how Americans vote. Now, with the future of our democracy, of health care and of reproductive rights at stake, it is vital that Democrats turn out to vote, take back the Senate and elect Joe Biden as president.”