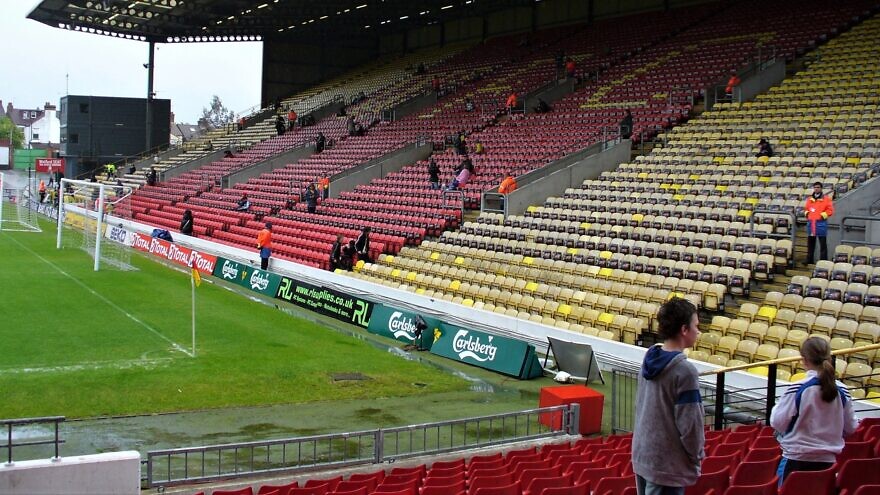 (December 9, 2021 / JNS) A Jewish man helped save the life of a fellow soccer fan who suffered a cardiac arrest last week at a Premier League game in the United Kingdom.

Darren Rolfe, 45, a trained first-aid responder, told Jewish News he was watching the Watford vs. Chelsea FC game on Dec. 1 at the Vicarage Road stadium when he saw some commotion take place 10 rows below him.

The father of three at first assumed that a fight had broken out between soccer fans from the opposing team, but then sensed that something serious had happened and quickly headed down the rows towards the scene.

“I saw a guy lying on the floor, not being attended to by anyone,” he recalled. “I started to ask his friend about what had happened and realized he was having a cardiac arrest. I cleared his airways, tried to make him respond and began compressions to his chest. He had a very faint pulse.”

Rolfe focused on the man—a fellow Watford fan who was later identified as Larry Brooks—for a few more minutes until paramedics arrived with equipment. It was the first time Rolfe put his medical expertise to use, and he encourages others to also be trained in CPR and “other critical life-saving skills.”

“If what I did saved someone’s life, then that’s wonderful, but really what matters now is making sure others gain the same skills,” he noted.

The day after the incident, Watford FC said Brooks was still in hospital under observation but “in remarkably good form.” He will also “require further treatment to address an underlying condition” and “has accepted the club’s invitation for him and his family to be guests at a future Hornets’ home fixture.”

Watford’s chairman and CEO Scott Duxbury said: “This club is genuinely a family and acted as such on Wednesday evening to look after one of its own. That’s how it should be … individuals who assisted also included supporters who sit close to Larry in the Upper Graham Taylor Stand. I would like to offer my personal thanks to those who took quick, decisive and ultimately essential action to help.”