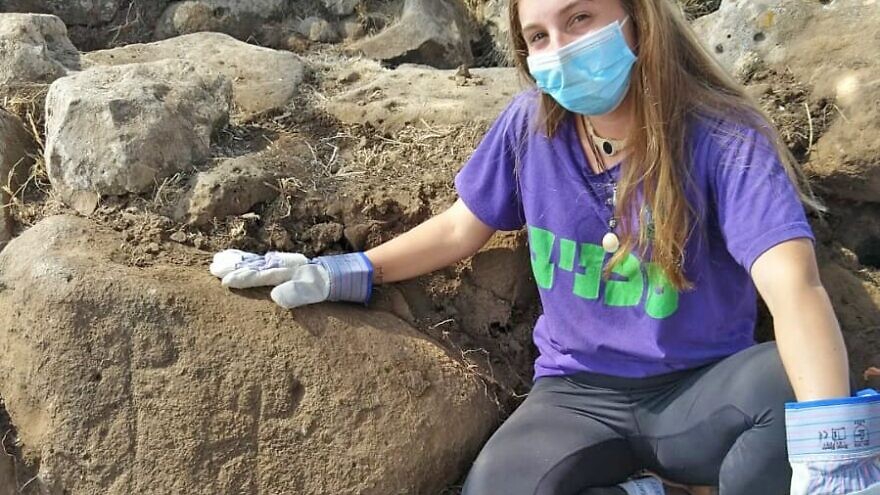 (November 11, 2020 / JNS) A fortified building complex from the time of King David has been discovered in the southern Golan Heights, the Israel Antiquities Authority (IAA) announced on Wednesday.

The archaeologists who uncovered the complex during IAA excavations in Moshav Haspin assess that it was a fort built by the Kingdom of Geshur (Iron Age, 11th-10th centuries BCE).

The excavation—conducted ahead of the construction of a new neighborhood in Haspin—was carried out predominantly by residents of Haspin and nearby Nov, in addition to youth from the pre-military academies at Natur, Kfar Hanassi, El Rom, Metzar and Katzrin. It was funded by Israel’s Housing and Construction Ministry and the Golan Regional Council.

According to IAA excavation directors Barak Tzin and Enno Bron, the fortified structure was built strategically on a hilltop above the Nahal El Al Reserve and encompassed by 5-foot-thick walls made of basalt boulders.

“In the excavation, we were astonished to make a rare and exciting find: a large basalt stone with a schematic engraving of two horned figures with outspread arms,” they said.

The IAA noted that a similar horned figure with outstretched arms was discovered on a cultic stone stele—uncovered last year during the Bethsaida Expedition Project, just north of the Sea of Galilee—next to a raised platform adjacent to the city gate. Since the Haspin stone was situated on a shelf next to the fort’s entrance, with two such horned figures depicted on it, the archaeologists speculated that “a person who saw the impressive Bethsaida stele [may have] decided to create a local copy of [it].”

The IAA explained that Bethsaida, a fortified city, is considered by scholars to have been the capital of the Aramean Kingdom of Geshur, which ruled the central and southern Golan 3,000 years ago. The Bible recounts that the kingdom enjoyed diplomatic relations with the House of David and that one of David’s wives was Maacah, the daughter of Talmi, king of Geshur.

According to the IAA, while cities of the Kingdom of Geshur, such as Tel En Gev, Tel Hadar and Tel Sorag, are known to have existed along the shores of the Sea of Galilee, hardly any such sites from the Iron Age have been found in the Golan Heights. The discovery of the Haspin complex is thus spurring new research in the area.

The discovery has also led to changes in the construction plan for the new neighborhood in Haspin, to prevent damage to the ancient complex—the surroundings of which will be developed along the El Al River’s bank for open-air educational archaeological activities. This endeavor aligns with the policy that “learning the past through experiencing work in the field strengthens the young generation’s bonds with their roots,” said the IAA.