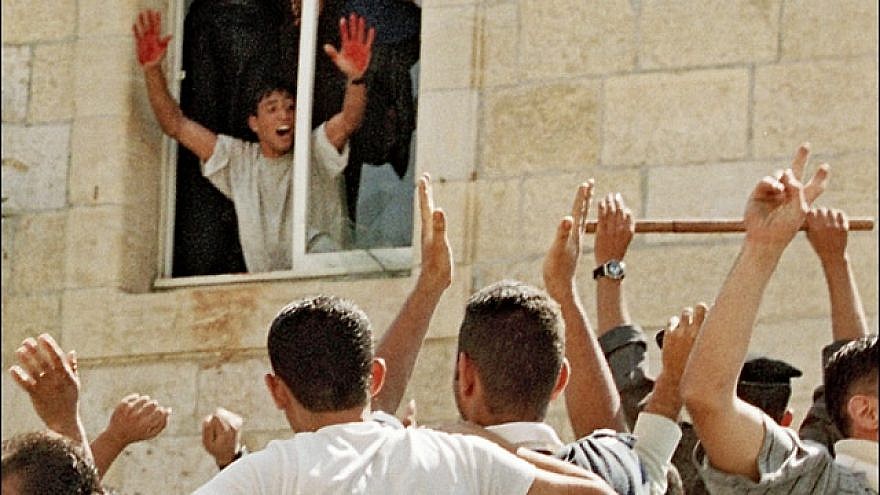 Aziz Salha, one of the participants in the infamous 2000 lynching in Ramallah of two IDF reservists, holds up his blood-stained hands. Salha was released in 2011 as part of the Gilad Shalit prisoner exchange deal. (PMW)
Spread the word.
Help JNS grow!
Share now:

(October 21, 2020 / JNS) Twenty years after the infamous 2000 Ramallah lynchings, in which IDF reservists Vadim Norzhich and Yosef Avrahami were brutally murdered by a Palestinian mob, Israel’s Knesset held a unique online conference on Monday focusing on the lessons learned from that event.

The conference, had some 900 attendees, was held under the auspices of the Knesset Israel Victory Caucus (KIVC), in partnership with the Israel Victory Project, an initiative of the Middle East Forum. The KIVC encourages Israeli decision-makers and opinion shapers to work towards ending the Israel-Palestinian conflict by ensuring the Palestinians give up their 100-year war of violent rejectionism against Jewish sovereignty.

The lynching took place at the beginning of the Second Intifada, a few months after Israel-Palestinian peace negotiations broke down because of Palestinian Authority leader Yasser Arafat’s refusal to accept Israeli Prime Minister Ehud Barak’s generous offer of concessions to end the conflict.

In October 2000, Norzhich and Avrahami had been called up for reserve army duty as drivers, but were picked up by Palestinian police after they mistakenly entered the Palestinian town of Ramallah. They were brought to Palestinian police headquarters in the center of Ramallah, where a violent mob of Palestinians stormed the building and tortured the soldiers to death, mutilating their bodies beyond recognition.

The event, much of which was filmed live by television crews, deeply shocked Israelis and many others around the world for its sheer brutality and the glee and pride of those who took part.

Speaking at the conference, titled “20 Years Since the Ramallah Lynchings: What lessons have been learned?,” Michal Norzhich, Vadim’s brother, said that his when he went to identity his brother’s body it was so badly destroyed that the only thing that was recognizable was his mustache.

Norzhich spent much of his time speaking at the event explaining how he and his family feel repeatedly let down by successive Israeli governments.

“[Former Prime Minister] Ehud Barak promised us personally that we will be well looked after but all we received was a slap in the face. The Shalit deal [which released some of his brother’s murderers] was a terrible agreement that hurt us deeply because it returned 1,000 terrorists to the cycle of violence,” said Norzhich. “Even today, the government and Supreme Court try and prevent us from seeking financial compensation from the Palestinian Authority, which was and remains responsible for the incitement and hate which leads to such attacks. There is no justice or logic to this,” he said.

Knesset member Oded Forer, chairman of the KIVC, said P.A. incitement has not changed even two decades later. “Violent Palestinian rejectionism is alive and kicking 20 years later, they continue to broadcast the same hate and incitement as they did in the days leading up to the lynchings,” he said. “Even as we are busy with other challenges, like the coronavirus, the conflict and the threats from terror do not disappear,” he added.

Forer went on to say that throughout history, conflicts only ever ended when one side wins and the other accepts defeat.

“We can not continue letting the Palestinian Authority carry on with their hate, rejectionism and incitement and expect that they will give up their war aims against us,” he said.

MK Michal Cotler-Wunsh also spoke about the contribution of incitement to the lynchings.

“On the 20th anniversary of the Ramallah lynchings, it is imperative that we take this moment of remembrance and reminder to honor those brutally murdered and to take action in order to ensure such incidents never occur again,” she said. “For that to happen, we must stop incitement, hold those engaged in it to account and expose double standards of those who enable and empower it.”

Nave Dromi, CEO of the Middle East Forum’s Israel Office, said, “Like many other Israelis, the Ramallah lynchings became a defining moment for me because it came shortly after Barak offered the Palestinian leaders overly generous terms for peace in 2000, and the vicious beating to death of our soldiers who had mistakenly entered Ramallah was their answer to Israel’s concessions and compromise. This chilling event demonstrated the need to defeat Palestinian violent rejectionism because it remains the greatest obstacle to ending the conflict and peace. Only an Israel victory will ensure that.”

Maurice Hirsch, the head of legal strategies for Palestinian Media Watch who served for 19 years in the IDF Military Advocate General Corps, including during the trials of some of the perpetrators of the lynchings, was damning in his address to the Knesset event.

“A direct result of the lack of a strong Israeli response after the lynchings was that the Palestinians understood that they can do whatever they want,” he said. “Even today, the current government doesn’t want to win, to defeat terror,” he added, referring specifically to the funds the Israeli government continues to transfer to the P.A. despite a law which demands a deduction of the amount the P.A. pays to terrorists and their families as part of its “pay for slay” program.

“I once spoke to a lawyer who represents Palestinian terrorists, who could not believe Israel continues to provide funding with the full knowledge that it contributes to terrorism. He told me that if Israel stopped the payments, we would stop at least 50 percent of the terror attacks,” said Hirsch.

Also speaking at the event was Avi Guez, attorney and Coordinator of Government Relations at NGO Shurat HaDin, who is representing the Norzhich family and many other victims of terrorism in filing claims against the P.A. “We believe that the legal route is very important to stop terror. The strongest message we need to send is that the shedding of Jewish blood and the blood of any innocent draws a heavy price, even after 20 years,” he said.

“There is confusion in the upper ranks of the IDF. It has no concept towards reaching victory but rather sees itself as part of the diplomatic process,” said Wagman. “Diplomatic processes and reaching understandings are not how you end conflicts.”