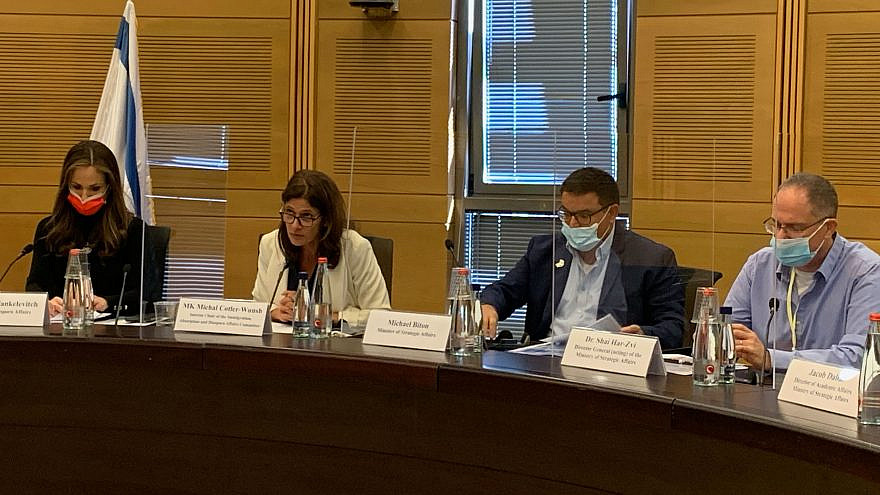 The hearing, in which representatives from Twitter, Facebook, Google and TikTok joined via video conference, was held by the Immigration, Absorption and Diaspora Affairs Committee and led by Knesset member Michal Cotler-Wunsh.

The discussion was focused on getting social media companies to invest more effort in curtailing online anti-Semitism and promoting the implementation of effective policies to counter the phenomena.

Particularly heated was a discussion between Cotler-Wunsh and Twitter senior public-policy manager Ronen Costello regarding the company’s continued refusal to address the anti-Semitic and genocidal comments of Iran’s Supreme Leader Ayatollah Ali Khamenei on the platform, and its failure to implement a consistent policy regarding world leaders and Holocaust denial.

“[How can] calls to genocide can slip through the cracks?” asked Cotler-Wunsh, to which Costello replied that Twitter’s policies were “consistently developing” and that “no world leaders are exempt” from them.

Costello further stated that Twitter would “enforce our policies where we feel there have been violations of them.” To which Cotler-Wunsh replied: “That answer happens to be unsatisfactory as a Jew whose genocide is being called for.”

AGAIN @Twitter came before the Knesset & AGAIN explained its inconsistent application of policy that does not require removing statements like @khamenei_ir‘s calls for genocide against the Jewish state and its people!

International lawyer and activist Arsen Ostrovsky also questioned Twitter’s lack of response to Khamenei’s tweet, asking “What has changed in six months? Are calls for genocide against Israel within the policy guidelines of Twitter?”

Cotler-Wunsh called on all social-media platforms to adopt the International Holocaust Remembrance Alliance (IHRA) Working Definition of Antisemitism in its entirety, emphasizing that without defining this “global challenge, it is impossible to combat it.”

Cotler-Wunsh’s opinion reflects that of the Israeli government, which on Tuesday released its first national response to combating online hate speech online with a report by the ministries of strategic affairs and diaspora affairs titled “The Hate Factor.”

“Freedom of expression must not protect violent incitement and anti-Semitism. … The outline published today will help in leading them to pursue a clearer and more aggressive policy against anti-Semitism,” said Diaspora Affairs Minister Omer Yankelevich in a statement.

“It is vital that Israel take a leadership role in global efforts to combat disinformation and online hate, with anti-Semitism being but one manifestation of this phenomenon,” Cotler-Wunsh told JNS.

The report was formulated after months of inter-ministerial discussions with social media companies and ongoing consultations with relevant governmental, civilian and academic bodies.

“Freedom of expression serves as a central tenet of any democracy. Unfortunately, hostile and anti-Semitic elements exploit the incapacity of social media platforms to [curtail] their hate speech, undermining this cornerstone,” said Strategic Affairs Minister Michael Biton in a statement marking the release of the report.