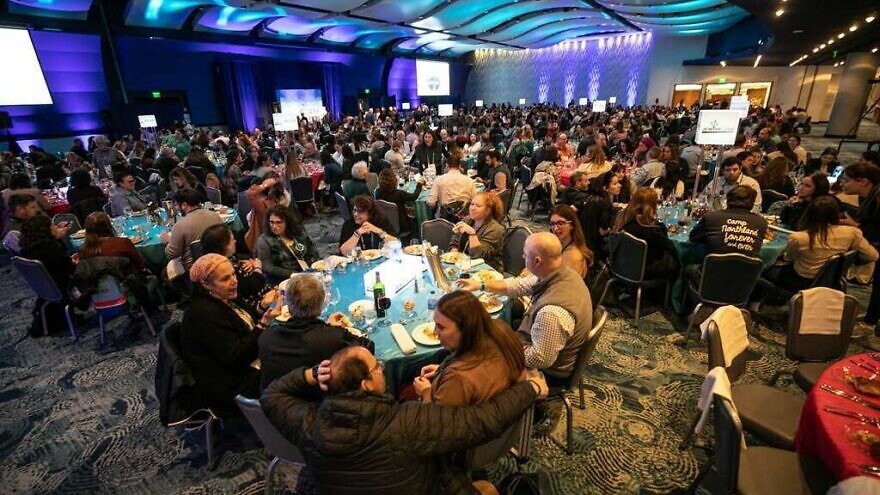 (December 14, 2022 / JNS) The Foundation for Jewish Camp’s (FJC) Leaders Assembly three-day conference in Atlanta furnished living proof that Jewish camping is alive and well and evolving to respond to a post-COVID reality.

Last week’s gathering offered 850 camp professionals from across the religious and communal spectrum, from the U.S., Canada, Israel and Europe (including Ukraine) as well as community lay leaders, advocates and funders, opportunities to learn from experts, share best practices, problem solve and offer support. Attendees also visited local institutions and museums, prayed, sang and socialized, and participated in affinity groups and breakout sessions on such topics as camper care, inclusion, business and operations. 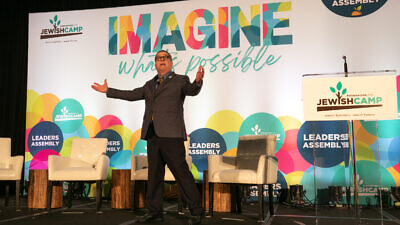 Throughout the gathering around the theme “Imagine What’s Possible,” participants had opportunities to visit the Kikar (marketplace), relax in the Restoration Station, enjoy a comedy show rich in camp humor, meet with experts during “office hours” and socialize over dessert and drinks—something not usually permitted on camp grounds.

Foundation for Jewish Camp CEO Jeremy Fingerman kicked off the ninth biennial gathering and introduced such field leaders as Tom Rosenberg, president and CEO of the American Camping Association (ACA).

While Fingerman is proud of the role FJC has played since its inception back in 1998, he is particularly pleased with how the organization has responded to the COVID-19 outbreak.

“FJC’s role as a central resource, convener, accelerator and catalyst has only been enhanced during the pandemic. And, rather than looking back, we challenged the field to come together to Atlanta with courage to dream big for our shared future,” he said.

Many field leaders stressed the ongoing importance of Jewish camping. Rabbi Avi Orlow, FJC’s vice president of program and innovation, noted, “Jewish camp is critical now more than ever. For many it is a home away from home. At Leaders Assembly, we had an amazing camp reunion for 850 people who make Jewish camp happen. After years apart due to the pandemic, coming together was a wonderful homecoming.”

Skip Vichness, chair of the Board of Directors of Hillel International, a former FJC board chair, and a director and investor in the summer camp industry for nearly 50 years, put it succinctly, “There is nothing more important than Jewish camping for giving Jewish kids a strong sense of Jewish identity. The fact that over 800 people are here, emerging from the pandemic, says something about Jewish identity!”

For many, the FJC Leaders Assembly was their first conference and first work travel since March 2020.

Rosenberg was moved by the number of people committed to Jewish camping. “For the field to gather again after all of these years of challenge—with such momentum—to help all children tethered by challenges—is incredible. I get the chills when I think of it.”

“It is geared to help people bridge the gap between intentions and actions. People often intend to do what they commit to but struggle to deliver,” she said.

Jennifer Phillips, CEO of Keshet in Chicago, presented on “Disabilities Inclusion” and “The Building Blocks of Inclusive Camping.”

“Leaders Assembly brought our Camp Community back together. It was inspiring to see a new generation of leaders committed to inclusion and making sure every camper has success. As we look towards the future of creating a community of belonging in our camp community, I know that we are moving in the right direction. I am excited about seeing where we are headed,” she said.

Lori Zlotoff, REDI (Racial Equity, Diversity and Inclusion) and camper care manager at the Union for Reform Judaism’s Camp Harlam in the Pocono Mountains of Pennsylvania, added, “Being at Leaders Assembly was inspiring both professionally and personally. So much of our work as individual camps is done in a silo, so to be with 800 other Jewish camp professionals was galvanizing in more ways than one. One of the biggest inspirations was seeing how many camps the FJC has brought into the Inclusion world—and there were so many workshops around inclusion, mental health, disabilities, LGBTQ+, racial equity and diversity that I had to make some hard decisions about which session to do next.”

Shawna Goodman, originally from Montreal, has taken her love for Jewish camping to Israel, where she now lives.

Goodman reported, “Summer Camp Israel was initiated because of the absence of meaningful summer programming for Israeli kids during the chofesh hagadol [the long summer break] in July and August. It is simply not sustainable to export kids to North American camps. Israelis need to find affordable solutions to provide safe and nourishing environments for their youth during the dreaded summer holiday.

“As an olah, one feels the need to be additive and importing, in a highly adaptive form, the North American model of summer camps felt natural. It was what infused me with a love of community and provided me with a connection to Israel and a sense of belonging,” she continued.

“Extracting these elements and nourishing them with Israeli culture on the Land is our response. Working with licensed Israeli amutot [non-profits], we have provided this 10-night model to 15,000 Israeli kids between the ages of 11 and 16 whose Israeli parents entrust us during the school year. We are educating and providing capacity-building grants and scholarships to help them reach their potential in providing a 10-night immersive, content-rich experience,” Goodman said.

Indeed, Israel was very much on the agenda at the Leaders Assembly. On the final day of the conference, camp directors offered reflections on the impact of Israel delegations on camps and campers over the years, including welcoming soldiers to Camp Ramah in Wisconsin in 1967 direct from fighting in the Six-Day War. Others spoke of the importance of sending teenage campers to Israel and shared details of RootOne, the initiative to jump-start and subsidize teen travel to Israel. 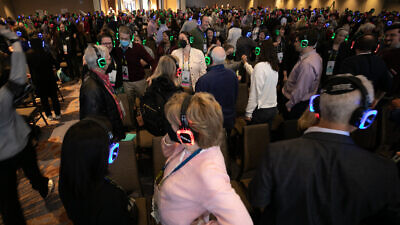 On Monday evening, the entire conference visited the Georgia Aquarium to mark “The Field at 75: A Celebration of Past, Present and Future.” Guests learned that a major donor to the $290 aquarium is Bernie Marcus, co-founder of The Home Depot. Marcus and the Marcus Foundation have been long-time supporters of the FJC.

The Yedid Nefesh initiative for mental health was launched in 2019 with a generous investment by the Marcus Foundation. The foundation recently awarded $60 million to RootOne in support of programs that enable American Jewish teenagers to travel to Israel. The evening paid tribute to founders of FJC as well as to camp professionals who stood to be recognized for years of service ranging from one year to over 40 years.

Elisa Spungen Bildner and Rob Bildner, FJC founders and current board co-chairs of the Board of Trustees, looked on with pride at the impressive organization they started.

“Rob and I started the FJC because we saw, more than 25 years ago, how little attention relatively the Jewish community paid to one of its most precious resources—camping—despite the fact that Jewish camping is one of the best ways, and a proven way, to get kids and their families to love and learn about Judaism,” Elisa Spungen Bildner said.

“Needless to say, the fact that 850 people who are invested in camping, from professionals to funders, flocked to Atlanta for the past Leaders Assembly is a testament to and affirmation of the key role Jewish camp plays in attracting young Jews to Judaism and keeping them involved—more than that—keeping them excited by Judaism,” she continued.

“But, let me be clear. Our work is not done, by a long shot. We need to attract even more Jewish kids and teens, from campers to counselors, to experience Jewish camp. And, the product we offer, Jewish camp and Jewish summer experiences, needs to continue to be better than what these same kids, teens and their families could choose among secular offerings,” Elisa Spungen Bildner said.

FJC strives to foster excellence and accelerate innovation at Jewish camps across North America by developing adaptive talent, deepening immersive learning experiences and catalyzing field growth. FJC also works to elevate Jewish camp on the cultural and philanthropic agenda, creating opportunities to engage even more young people in Jewish camp through groundbreaking programs such as One Happy Camper and FJC’s Specialty Camps Incubator. FJC advocates for more than 300 day and overnight camps that provide nearly 180,000 campers and young staff each summer with a meaningful, personal and lifelong connection to Judaism.