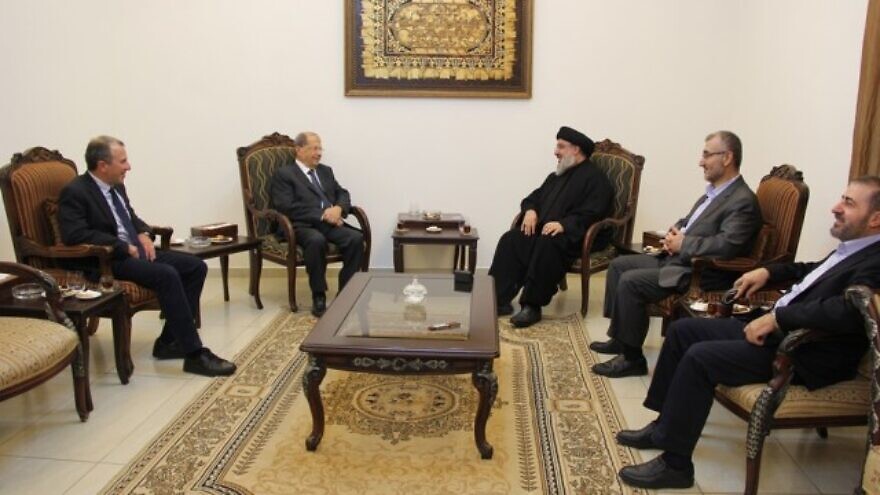 (October 27, 2022 / JNS) Lebanese President Michel Aoun clarified on Thursday that the maritime border deal forged with Israel does not constitute recognition by Beirut of Israel, after Prime Minister Yair Lapid suggested as much.

In a statement issued after he signed a letter approving the terms of the agreement, Aoun said it would have “no political dimensions or impacts that contradict Lebanon’s foreign policy.”

Lapid signed the U.S.-mediated accord on Thursday, following its approval by the Cabinet earlier in the day.

Lapid also suggested that by agreeing to the deal, Lebanon, an “enemy country,” was effectively recognizing Israel.

The agreement draws a border between the two countries’ exclusive economic zones (EEZs) based on a boundary known as Line 23, and awards a disputed area of around 840 square kilometers (324 square miles) to Lebanon, while recognizing Israel’s claim to the Karish gas field and to royalties from the section of the Qana field that extends into the Jewish state’s EEZ.

A ceremony was scheduled to take place in the afternoon at the United Nations base in Naqoura, located along the Israel-Lebanon border, to be attended by members of the Israeli, Lebanese and U.S. negotiating teams.

Israel and Lebanon remain technically at war and the delegations are not expected to appear together at the ceremony.