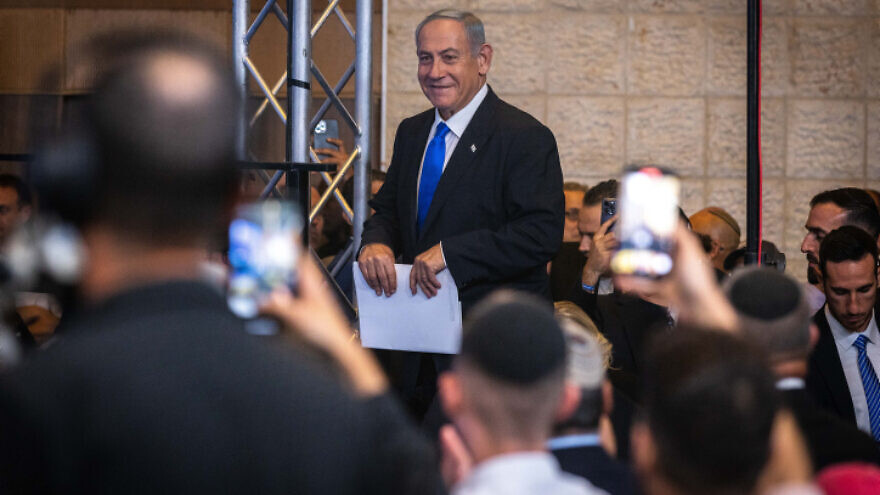 (November 2, 2022 / JNS) Opposition leader Benjamin Netanyahu will attempt to form a governing coalition in just two weeks, by Nov. 15, the date of the swearing-in of the new Knesset, Israeli media reported on Wednesday.

Netanyahu’s move reflects his confidence that he will easily form a government, as he would normally be given 28 days to build a coalition with the possibility of a 14-day extension. He will assign loyalists to key positions, Channel 11 reported.

Names that have been floated are Ron Dermer, Israel’s former ambassador to the U.S., as the new head of Israel’s National Security Council, as well as former Cabinet Secretary Tzachi Braverman and campaign manager Yossi Sheli for unspecified senior positions in the Prime Minister’s Office.

Aryeh Deri of the Shas Party, as the longest-running Netanyahu ally, is expected to play an important role in the new government, Channel 11 reported. While members of Netanyahu’s burgeoning coalition are calling for substantive reforms to the justice system, Deri will act as a “balancing factor” regarding those expected changes, the news outlet said.

Itamar Ben-Gvir, leader of the Otzma Yehudit Party, which partnered with the Religious Zionism Party to run on a single slate, will reportedly receive the Ministry of Public Security, a post he demanded three days prior to the election in a press conference.

With nearly 90% of the vote counted, Netanyahu’s coalition appears to be cruising to victory and will pick up 65 Knesset seats (61 seats is the minimum necessary for a majority in Israel’s 120-seat parliament.)