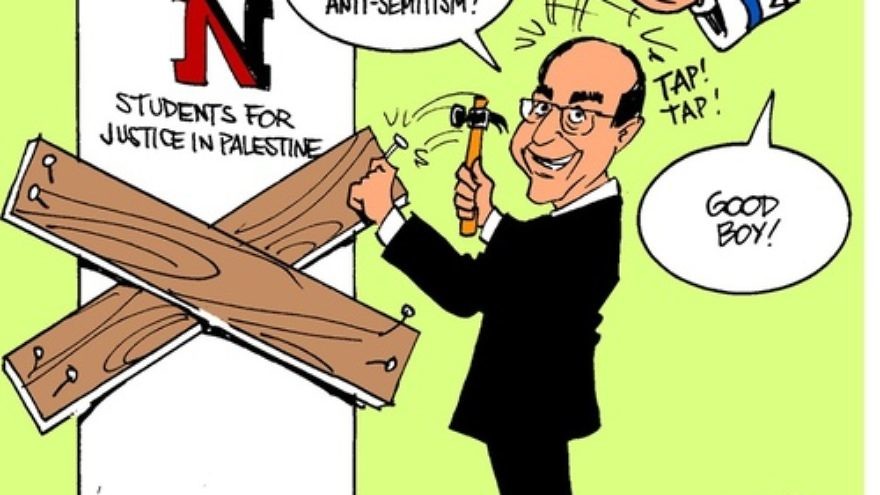 A cartoon posted on the Facebook page of Northeastern University's Students for Justice in Palestine chapter—which was suspended earlier this year before being reinstated—depicts University President Joseph Aoun nailing boards on the door of the student group. Mirroring the conspiracy theory that Israel controls American foreign policy, the cartoon features a disembodied arm from the sky—with a Star of David and “The Lobby” written on its sleeve—patting Aoun on the head. Credit: Northeastern SJP Facebook page.
Republish this article
815 WORDS
Spread the word.
Help JNS grow!
Share now:

A grand paradox exists within Students for Justice in Palestine (SJP). The group markets itself as a movement to “restore the self-determination of Palestinians” while simultaneously denying the self-determination of Jews. Operating under the premise that the Jewish state is “illegally occupying Palestine,” SJP tries to spread awareness of the hardships faced by Palestinian-Arabs claiming that Israel treats them unfairly compared to Jewish citizens.

By showing images of the security fence that was built out of necessity—to limit the number of Palestinian-Arab terrorist attacks on Israeli civilians—SJP claims that Israel is an “apartheid state” and holds Israel to a higher standard than every other country in the Middle East. But SJP is far from the “social justice” movement it claims to be, as it partakes in some of the worst instances of anti-Semitism on college campuses.

SJP activists shouting Jew-hating slogans such as “From the river to the sea, Palestine will be free” highlight the hypocrisy that surrounds the organization. Some activists associated with the group contend that the slogan does not call for Israel’s destruction, but rather that “Palestine” will be “free from colonialism.” Such arguments, however, do not hold true when members of the same SJP chapter call for the “Zionist state” to be torn down. In an attempt to save face, SJP activists will immediately go on the defensive and argue that what they say is not anti-Semitic, and then go on to criticize those who “cry anti-Semitism” as old-fashioned.

The reality that SJP refuses to acknowledge is that the U.S. State Department considers any demonization and double standards against the Jewish state to be anti-Semitic. This would include comparing Israeli policy to the Nazis, something that Vassar College SJP did when posting a Nazi-era cartoon on its Tumblr page. Pro-Israel students are often referred to as “baby killers,” which demonstrates a modernized incarnation of the ancient blood libel that has targeted the Jewish people for millennia. The blood libel claim says that Jews killed non-Jewish babies to bake their matzot for Passover. By arguing that all Zionists “kill babies” and making ridiculous claims that Israel is committing “genocide” against Palestinian-Arabs, SJP continues to enable such vitriolic Jew-hatred to continue onward in the name of “social justice.”

This is why it comes as no surprise that an SJP-affiliated student, on Aug. 20 at Temple University in Philadelphia, shouted anti-Semitic insults and punched a pro-Israel student in the face during an orientation event. SJP historically bullies pro-Israel students and invites vehemently anti-Semitic speakers to campus under the pretense of “dialogue.” But SJP activists have done far more than just harass Jewish students. In addition, they use the false language of “human rights” and “social justice” to get various student groups to assist their struggle for such causes. SJP deliberately misleads the LGBTQ, feminist, and African American communities, as well as many other minority groups, claiming that it sympathizes with their struggle for legitimacy against “white, cis-gendered male” communities that stand in their way. Thus, these groups take part in SJP events and call out any pro-Israel student who offends them.

What many of these minority groups fail to recognize, however, is that the “Palestine” that SJP defends is not only anti-Semitic, but also misogynistic, homophobic, racist, anti-Christian, and fascist. SJP defends a place where women are subject to honor killings, where members of the LGBTQ community face persecution, torture, and death, and where Jews are not allowed to live, build homes, or purchase land. SJP does not discuss these injustices, nor do they care when Hamas murders opponents and drags them through the street. In SJP’s mind, none of this matters, because “Israel is the oppressor.” Such deception, manipulation, and lies have led to the collegiate community tolerating SJP.

The pro-Israel community has had enough with SJP’s Jew-hatred. Zionist college students cannot allow this organization to continue bullying the Jewish community under such socially unjust premises. What they stand for bastardizes those who truly fought for freedom and those who actually fight oppression. To continue defending a fascist entity while demonizing the only country in the Middle East where Arab citizens are free to express themselves however they please only highlights the true nature of SJP’s hypocrisy.

Pro-Israel students should refuse to be subjected to SJP’s bullying, which seeks to ensure our silence. We will spread the truth about the group’s malicious purposes. We will tell the story of who is causing problems for Palestinian-Arab self-determination. We will no longer be controlled by fear. SJP’s days of harassing the Zionist community are numbered.

Elliott Hamilton is a rising senior at Pitzer College in Claremont, Calif. He is a Committee for Accuracy in Middle East Reporting in America (CAMERA) fellow, the co-president of Claremont Students for Israel, and the Jewish identity chairman of the AEPi fraternity’s Chi Chi colony.