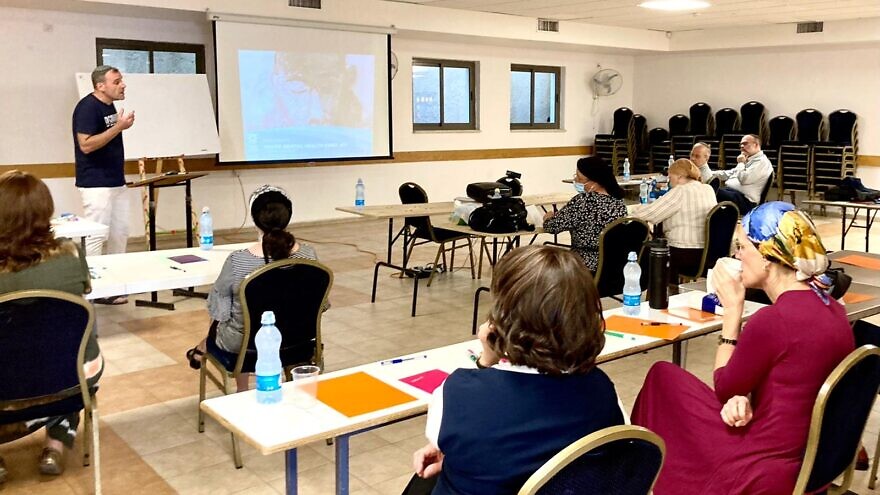 Hammer told JNS that following the shiva, the traditional seven-day mourning period, “I decided the only way that I could make sense of my loss, our loss—the only way that I could possibly continue and persist to exist—would be commemorating her by helping other people who are suffering, and hopefully, making an impact and saving their lives so that they should never have to experience or feel the tragic loss that we do every single minute of every day.”

A month after Gila’s passing, Hammer, a resident of Beit Shemesh, was approached by Stuart Katz, the owner of a travel business whose own daughter was struggling with mental-health issues, about getting involved in a new initiative that he was introducing in Israel to help those who are at the onset of crises.

Katz had founded the Israeli branch of Mental Health First Aid (MHFA), an Australian-based organization that since 2000 has been training individuals in countries worldwide to serve as “mental-health first-aiders”—those able to deliver initial help to people identified as grappling with certain issues until appropriate professional support is received or until the crisis resolves.

Hammer underwent the necessary training to become a certified mental-health first responder as well as a trainer. On July 4, Hammer, along with instructor Ruchie Bromberg, launched the first-ever, 14-hour MHFA Israel Youth Course in Beit Shemesh with 17 participants to provide the tools they will need to become certified mental-health first-responders and help teens in crisis.

“The idea of the course is not to diagnose and not to offer therapy; it’s a first-aid course for responders,” said Hammer. “Just like someone from Hatzalah or MDA [Magen David Adom] who arrives to help someone who is physically sick or in danger of losing their life knows how to respond, the same response [would apply] with regard to mental health.”

Participants are taught how to spot the signs and symptoms of mental-health problems in young people, as well as learn effective initial help strategies and how to guide a young person towards appropriate treatment.

Hammer noted that mental-health emergencies are more challenging to treat because such issues are simply more difficult to identify and more complex by nature.

He added that as a first responder, the goal when identifying teens who are suffering is to “bring them back to be grounded, more at ease, and then they would be willing to remind themselves that ‘I do have reason to live, I do have options that I can explore,’ and bring them to the next stage, which would be therapy or a hospital.”

Hammer explained that the course is geared for anyone who works with youth under the age of 18, including educators, youth directors, guidance counselors and parents (the subset he feels are most in need of the course), along with mental-health professionals themselves.

Fourteen of the 17 participants who started the course on Sunday are from the Lema’an Achai organization, which fights poverty in Israel, while the other three joined independently.

‘An army of people who can help save lives’

Avi Tenenbaum, an Israel-based mental-health counselor who since 2010 has been running a private practice specializing in addiction treatment and acute trauma that occurs following a catastrophic event, also served as the former director of the Psychotrauma and Crisis Response Unit at United Hatzalah of Israel. He has trained thousands of first responders in psychological first aid. (The United Hatzalah Psychotrauma and Crisis Response Unit are currently in Surfside, Fla., working with survivors and family members of the recent condominium collapse.)

As a result of Tenenbaum’s expertise in providing aid for families coping in the wake of large-scale disasters, he was called to the scene in the immediate aftermath of the Tree of Life Synagogue mass shooting in Pittsburgh in 2018, Hurricane Harvey that ravaged Texas and Louisiana in 2017, the 2016 Haifa fires and many other tragedies.

Tenenbaum, who was contacted by Katz to serve as a consultant and help design the curriculum for the MHFA Youth Course, told JNS that he is a big believer that average individuals, with a minimum amount of training, can play a huge role in saving lives.

“In the addiction field, one of the biggest resources is the 12-step groups, like Alcoholics Anonymous. What it essentially is,” he explained, “is a peer support group—a grassroots group where you are able to give very minimal training to people, and then they go and help each other with their own life experience and their own knowledge, and are able to help one another in a tremendous way.” 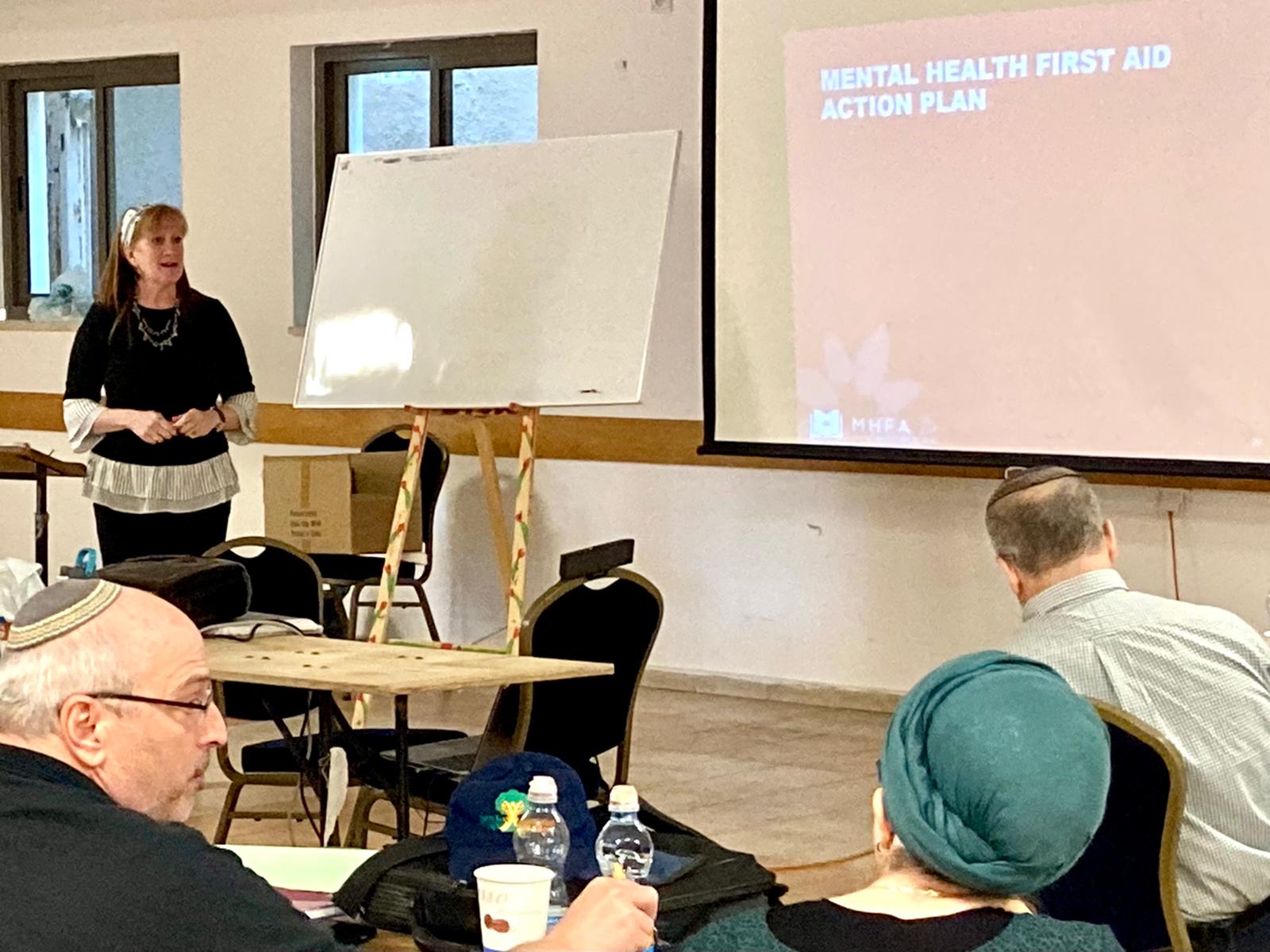 Tenenbaum discovered “that in the addiction field, and then in the trauma field with the unit that I ran as well, we were able to take regular people, first responders, without psychology degrees and give them a basic course, and basic tips and tools in crisis intervention, and with minimal training, they made enormous differences in people’s lives during crises.”

He said “you can tap into this enormous resource of regular people who are already in the community and who know people, including the teens who are suffering. Maybe it’s their gym teacher or mini-market guy that sells milk, but they are there already. Just give them the tools to help others. All of a sudden, you have an army of people who can help save lives.”

In terms of the current picture of teens suffering from mental-health issues in Israel, Tenenbaum said that, unfortunately, statistics from government agencies on the topic, specifically from the Ministry of Health, are not available. “Whether teens or adults, I found that the statistics in Israel are greatly lacking in a shocking way. Israel is a leader in the world in many areas, but when it came to the statistics about mental health among teens, it was so lacking.”

He added, “You don’t have the information. We don’t even know our own situation. You have this very imperfect picture of how bad it is. And it’s worse than it is. It’s not that we have zero information, but it’s very incomplete.”

‘Pay more attention to our teens’

Tenenbaum said that when he needs information or statistics, he often turns to the research commissioned independently by Headspace, an organization in Israel with centers in Jerusalem and Bat Yam, and which offers walk-in mental-health services for Israeli teens.

“We hope Israel will be able to pull more information to get a clearer picture of the situation,” he said.” That will create the urgency to pay more attention to our teens, to allocate more resources to do whatever it takes to help them.”

Katz told JNS that he got involved in the mental-health field when his daughter self-diagnosed herself three years ago.

“One thing I realized pretty fast, and which was verified by the professionals, is that the biggest obstacle is the stigma surrounding mental-health issues,” he acknowledged. “Mental health is a taboo topic until you come face to face with it. What people don’t realize is that 50 percent of the population at some point of their lives will face mental-health issues head-on. Tragically, people don’t realize it even when they are facing it.”

Katz said that for the past two years, he has been advocating for the MHFA youth courses in Israel and for the past 10 months has been building the foundation, leading to this week’s initial course.

“If someone is not literally bleeding from their brain, but in pain, something is wrong, and we have to be able to know how to assist them,” he said. “We like to deal with this in non-crisis situations, and we don’t want them to become crisis situations, just like with any type of physical issue.”

He said he hopes that the number of those who achieve certification will “multiply like rabbits,” so as to increase the chances of potentially saving lives.