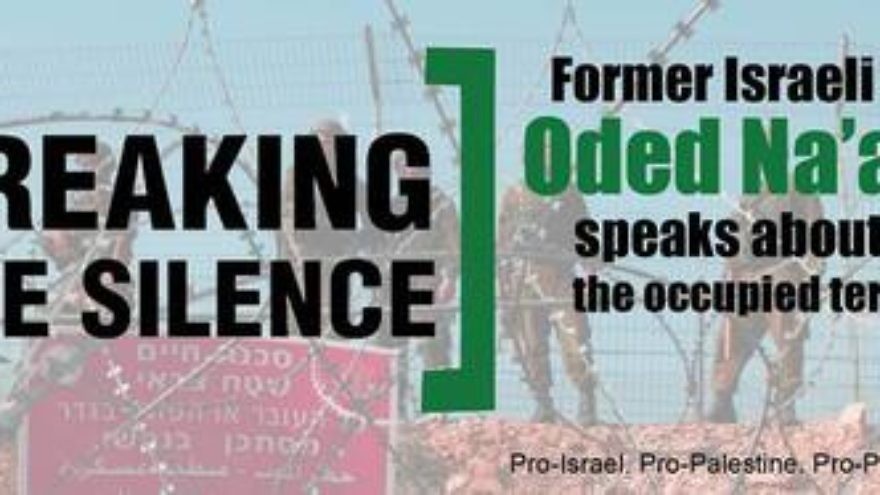 An event flyer for J Street U's hosting of a speaker from the NGO Breaking the Silence at the Washington University in St. Louis Hillel on March 31, 2014. Credit: Facebook.
Republish this article
1137 WORDS
Spread the word.
Help JNS grow!
Share now:

On March 31, I attended a disturbing lecture at Washington University in St. Louis. It was co-sponsored by St. Louis Hillel at Washington University and J Street U. The speaker, a former Israeli soldier with the group “Breaking the Silence” (BtS), misrepresented and demonized the Israel Defense Forces, Israel, and Israeli policy. BtS is known for bringing in speakers like this, so I could not understand why Hillel and J Street U had sponsored a talk whose only purpose appeared to be to misinform audiences and instill hostility towards Israel.

As an Israeli reservist who had been stationed in the West Bank, I sat in disbelief as the speaker described attitudes and policies that were entirely divorced from reality.

I had no idea what he was talking about or what motivated him to lie.

He did not describe the Israel or IDF that I know so intimately.

My experience taught me that even during wartime, Israel made it a priority to meet the needs of Palestinians even though they had made themselves enemies of the State of Israel by launching the second intifada.

I recall that during my service in Hebron, I had to adhere to international humanitarian law and ensure that the soldiers in the Judea Brigade were educated about the Geneva Convention and the rules of engagement—or face punishment. We sometimes went beyond these strict rules to help Palestinians. Once, when I served in my unit’s headquarters, we arranged a complex operation so that my unit, with the help of another unit, could save the life of a Palestinian boy living in Gaza whose mother had died. We did some investigating, and discovered that his uncle lived in Ramallah. In a special operation in the middle of the night, we moved the child to his uncle so that he would not be left alone in the streets of the Gaza Strip.

It was torture for me to sit there quietly and listen to the distortions of this former soldier who had served during the most violent period of the second intifada (2000-2003), when suicide bombers and snipers were wantonly murdering Israeli men, women, and children. But he never described the terrorism that forced the IDF to take measures to protect our families.

If he has complaints about the IDF, he should be an activist in Israel. Soldiers don’t always do the right thing or live up to the IDF code. They should be disciplined. Israel’s policies can be debated. But Israel is constantly examining itself critically, and debates in Israel are energetic and promote the full variety of views. Why, then, would he come to the U.S. to complain about his own army?

I think I know why. It’s because there are groups who are parading him around to tell half-truths and lies to defame Israel. When he was asked that very question during the question-and-answer period, he said, “I came here to tell Americans what their tax money is funding.” He said that attacking Israel with F16s is not the right answer, but that Israel needs to be pressured. I wondered what kind of twisted thinking would make a person who lives in a vibrant democracy, where he can campaign for his political positions, instead ask outside forces to pressure his country? What motivated him? Is he a post-nationalist who doesn’t want Israel to exist at all?

He went on making outlandish claims. He said the IDF is actually an anti-Zionist army because it operates in the West Bank. He added that there is no more terrorism today, so Israel had no reason for its security measures. He apparently forgot why there are dramatically fewer terror attacks today, or maybe he just didn’t want to mention that it might be because of Israel’s heightened security.

The misrepresentations continued. He claimed the Palestinians have no security forces—even though they do, and my unit worked closely with those forces on a daily basis. The speaker either did not know, or was told to say that.

I worked almost five years to protect civilians, human lives, and their dignity in the West Bank. I spent the most important years of my life to make sure the IDF protects human rights and lives up to the Geneva Conventions, to protect my army and my people. Yet this speaker, in a matter of 45 minutes, invalidated my entire military service, accusing me of the very things that I worked so hard to prevent.

I wished I could have spoken up and shared the reality I knew. Instead, the organizers and sponsors made it very clear that there would be no dialogue. They handed out a list of rules that included not telling anyone what was said in the room, how we needed to allow our beliefs to be challenged, and how we should be accepting of the speaker’s comments. The sponsors didn’t even allow us to openly ask questions. We could only write them on a piece of paper, and then they would choose which ones to ask the speaker. Clearly, they did not want the speaker to be challenged.

It was very hard to understand how the speaker represented “Breaking the Silence” when I was being silenced.

I couldn’t understand why the speaker was being praised that night. I couldn’t understand why someone who was dedicated to misrepresenting Israel and its moral character was given credibility. I was hurt that I was silenced while someone lied about my experience. The organizations who invited this man, J Street U and Hillel, had no interest in how I helped uphold human rights. They didn’t want me to speak about it, though I openly made myself available to them that night.

The organizers said they love Israel. But by praising lies and misinformation, they made it clear that their “loving Israel” is only an empty façade.

Hen Mazzig is the Pacific Northwest Campus Coordinator for StandWithUs and a member of the sixth StandWithUs “Israeli Soldiers Stories” tour.