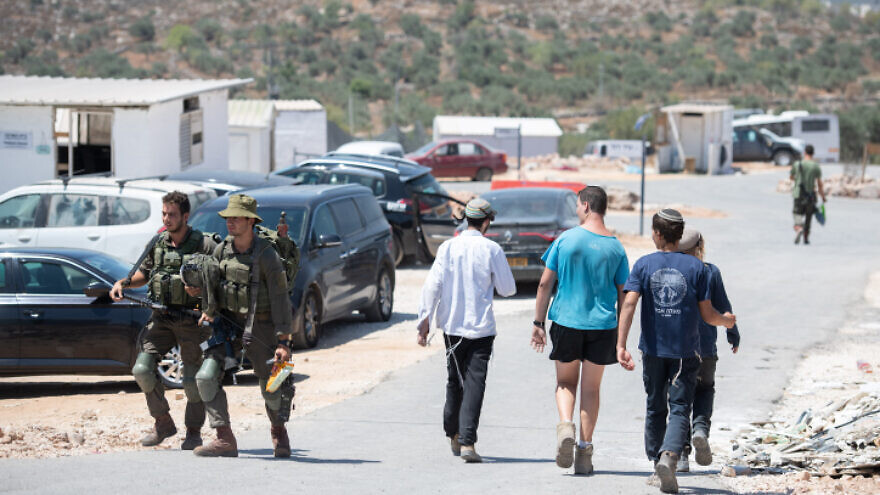 Soldiers and residents seen in the enclave of Evytar in Samaria on June 27, 2021. Photo by Sraya Diamant/Flash90
Spread the word.
Help JNS grow!
Share now:

(June 28, 2021 / JNS) Negotiations are underway between the Israeli government and settler leaders that would avoid the evacuation of residents from the Evyatar enclave in Samaria.

Whether or not a compromise is reached, the IDF has been told to prepare to evacuate in any case, and back-up military and police forces will arrive in the Nablus area, where the small community is located, where they will be under the command of the IDF’s Judea and Samaria Division.

Earlier on Monday, Israeli media reported that Evyatar residents approved a compromise formula, according to which families living in the outpost will leave by the weekend, but that the homes set up there will remain standing. This compromise would allow for the placement of an army base at the site, and eventually the opening of a yeshiva. It also calls on the IDF to conduct a land survey within six months to ensure that Evyatar is not situated on privately-owned Palestinian land. After the land status is determined, the government could authorize Evyatar as a new settlement.

On Sunday, Gantz responded to a letter by Knesset Member Aryeh Deri (Shas), in which he called for the outpost to be recognized, by stating that authorities will be sensitive but determined in dealing with the issue.

“This is not the clearance of a recognized community or the sealing of the fate of families. This is about an entry into territory done under the cover of Operation Guardian of the Walls, illegally, and without approval of the authorized elements,” Gantz wrote.