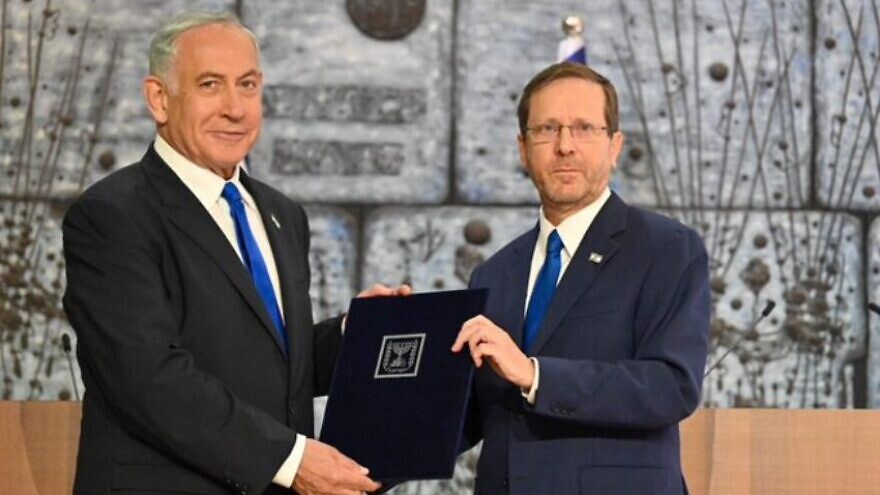 “After a series of election campaigns, the people clearly decided in favor of establishing a government headed by myself,” Netanyahu said at the opening of his remarks after being tasked by Herzog to form a coalition.

“I would like to thank all 64 members of the Knesset who recommended me. We will do everything so that, with God’s help, it will be a stable and successful government, a responsible and dedicated government, which will work for the benefit of all the residents of the country without exception.”

Noting that Israel has become a flourishing country through the efforts of generations, Netanyahu promised to help it reach still greater heights.

He also promised to work to bring about more peace agreements between Israel and Arab countries. Those agreements would be based on “peace through strength, peace in exchange for peace.”

In accordance with Israel’s Basic Law: The Government, Netanyahu will now have four weeks, with the possibility of a 14-day extension, to earn the formal support of at least 61 lawmakers to pass a confidence vote in the parliament.

On Friday, Herzog wrapped up three days of consultations with representatives of all political parties that entered the 25th Knesset.

On Thursday, the Religious Zionism, United Torah Judaism, Oztma Yehudit and Noam parties all recommended that Netanyahu be tasked with forming a coalition. The previous day, the other two parties that makeup Netanyahu’s right-religious bloc, Shas and his Likud Party, also recommended that he be given the opportunity to form a government.

The factions won a combined 64 seats in the 120-member Knesset in the Nov. 1 national elections.

After five elections in rapid succession beginning in April 2019, the Israeli public has given Netanyahu a resounding mandate to helm a stable, right-religious coalition.

Already Israel’s longest-serving premier, Netanyahu is primed to return to the Prime Minister’s Office for an unprecedented third round of leadership, after holding the post from 1996-1999 and 2009-2021.