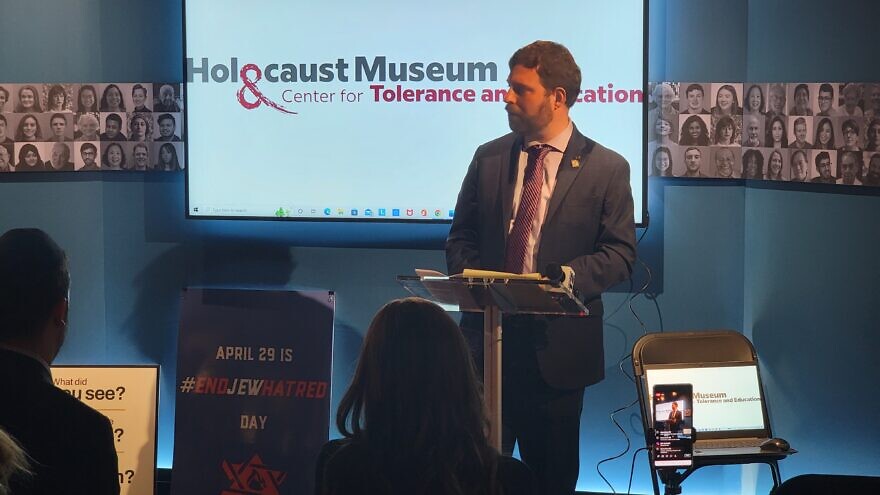 (May 3, 2022 / JNS) A day after Yom Hashoah, the annual remembrance of the Holocaust, a New York lawmaker issued a proclamation declaring April 29 “End Jew Hatred Day.” The move came amid ongoing anti-Semitic attacks in the Empire State.

State Sen. Elijah Reichlin-Melnick presented the proclamation at the Holocaust Museum & Center for Tolerance and Education in Rockland County, N.Y., near the center of the large Orthodox community there.

“We are at a time now when there are horrific human-rights violations occurring on a daily basis around the world. In Syria, in Yemen, in China, in Burma and in Russia’s ongoing attack in Ukraine. And so it’s more important than ever that we keep the memory of the Holocaust alive,” said Reichlin-Melnick during the presentation. “We have to use that knowledge to alert people where racism, bigotry and militarized nationalism can lead when left unchecked.”

“We all know Jew-hatred didn’t end when the Holocaust did,” he said. “New York State has recently experienced an alarming increase in Jew-hatred crimes … it’s a tragedy that New York leads the nation in anti-Semitic incidents.”

He noted that anti-Semitic incidents doubled in Rockland County from 2020 to 2021. New York State recorded more than 415 such incidents in 2021—up from nearly 340 in 2020, according to the Anti-Defamation League’s Audit of Antisemitic Incidents.

“How do we shift the growing trend from hate and violence to love and tolerance? All of you who are here are part of that solution. This movement is part of that solution,” he continued. “We can be the generation that ends Jew-hatred once and for all in New York State, in the United States and in the world.”

“Despite centuries of genocidal persecution and pogroms, the Jewish people have never stopped honoring and celebrating our traditions, heritage and faith,” she said, “and we have never given up on the dream of finally ending Jew hatred in our generation.”