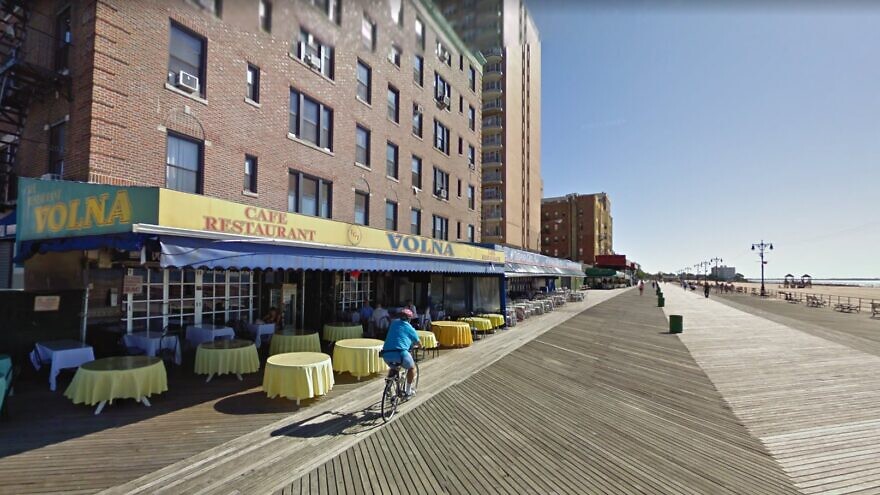 (February 25, 2022 / JNS) News travels in an instant these days, and the updates coming out of Europe are hitting hard in a south Brooklyn neighborhood. Brighton Beach is home to one of the largest Ukrainian populations outside of Eastern Europe, so much so that the neighborhood is known by its nickname of “Little Odessa,” named for the Ukrainian port city on the shores of the Black Sea.

Residents there are reeling as they watch Russia’s siege of their native land.

“Putin is Hitler. This invasion even began just like Hitler, at 4 a.m.,” Samuil Khaytin, a Jewish resident of Ukrainian heritage in Brighton Beach, told JNS. Khaytin was referencing the Nazi invasion of Ukraine in June 1941.

“He tells the public it’s not a war, that it’s a special operation. Of course, it’s 100% war! Putin is trying to remake the Soviet Union, and he doesn’t listen to anybody,” said Khaytin.

It’s impossible not to notice a more solemn tone in the neighborhood this week. Brooklyn itself is home to the largest Russian and Ukrainian immigrant communities in the United States. There are 34,500 Russian immigrants and 45,300 Ukrainian immigrants in the borough, more than in any county nationwide. Little Odessa is a community that is essentially a snapshot of the ex-Soviet diaspora.

On just a small stretch along Brighton Beach Avenue, parallel to the Atlantic Ocean, one walks past Ukrainian restaurants like Oleandr and Skovorodka, along with a shop selling Ukrainian phone cards. The great majority of the Russian immigrants in the community moved to New York to escape Soviet rule, creating somewhat of a sense of harmony this week, even as Russia and Ukraine go to war. There is an overarching sense of anxiety, especially for those, like Khaytin, who have loved ones back in Ukraine.

“My nephew is there right now, and I have many friends there. My best friend is in Lviv. I lived in Kyiv for 45 years. My daughter was born there. My sister passed away there last May. I have been there five times since I moved to the USA. I feel what is happening there right now in my heart. What Putin is doing is dangerous for all the world. For him, it’s nothing,” said Khaytin.

Another Ukrainian Jew from Brighton Beach took up arms this week – in Israel. Ross Den was on miluim — or reserve duty in the Israel Defense Forces — when JNS reached out to him this week. During what appeared to be a brief break in a training session, Den, speaking after the Russians’ incursion into the separatist-controlled regions in eastern Ukraine, but before Wednesday night’s full-scale invasion, said that was has transpired this week shouldn’t have come as a shock to anyone paying attention.

“It’s very predictable. The strong will take from the weak if they are allowed to. If there are no repercussions for what Russia is doing, then they’ll do whatever they want to do, so they’ll push every envelope possible without suffering massive consequences,” Den said, adding, “Ukraine has always been Ukraine, right? So, everyone knows what the borders are. Even though the majority speak Russian, just because you speak a particular language, doesn’t mean you want to be part of that country. Ukraine overwhelmingly wants to move away from Russian rule, from Soviet rule, toward the West.”

There has been a particular concern for the fate of Ukraine’s large Jewish population, with Jewish aid groups mobilizing to assist and the Israeli government offering refuge for Jewish Ukrainians who are looking to escape.

“I don’t think there’s a big reason to worry about the Jews in particular. Ukraine doesn’t belong just to the Jewish people. What Russia is doing right now, it is against all of the Ukrainian country,” said Khaytin, who, like many others, expressed disgust in Russia’s framing of Ukraine — led by a Jewish president — as a country controlled by Nazis.

Den said he doesn’t worry so much for the Ukrainian Jewish population for different reasons.

“Russian forces will see a different [Ukrainian] army that has advanced light-years from where they were eight years ago. They know how to fight, they know how to do it properly at this point, they have a lot of experience. It is not going to be Kabul where it will fall without one shot. They will really fight back. Ukraine became a little Switzerland in that sense, as private citizens own arms for hunting, and they will use them against any invading force,” said Den.

That prediction held true, at least on the first day of major fighting. Russian forces, reportedly expecting to encounter Ukrainians laying down the arms, instead were met with fierce resistance.

Still, Putin’s troops have decimated major cities and occupied Ukrainian sovereign territory, leaving many in Little Odessa desperately trying to reach loved ones. Khaytin, on his way back to work after an exasperating discussion, exclaimed loudly, “Glory to Ukraine!”