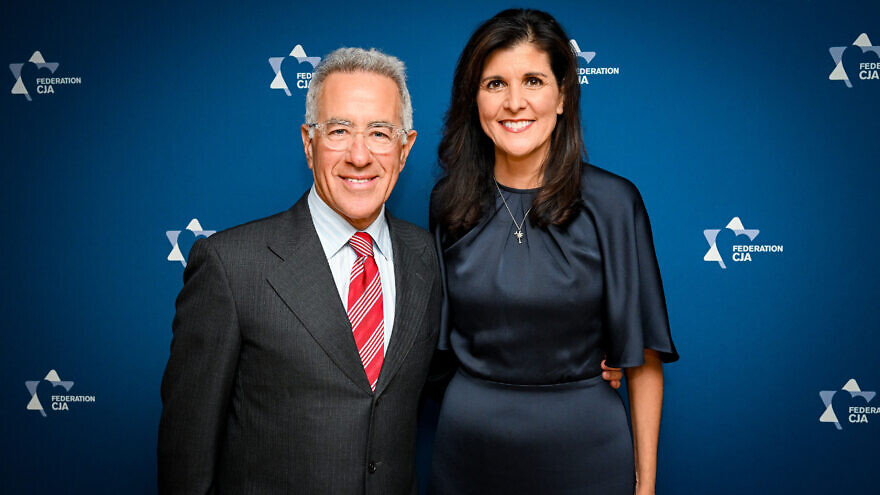 (December 7, 2022 / JNS) Addressing prominent Jewish leaders and community members in Montreal on Tuesday, former United States ambassador to the United Nations Nikki Haley stressed the importance of America’s role in the Middle East and its impact on stability in the region.

“The only way peace happens in the Middle East is if the U.S. stands strongly and steadfastly with Israel,” Haley said. “A strong America prevents war. At the end of the day, it’s about leadership and America has to demonstrate that leadership, including absolute support for its allies like Israel.”

The event was hosted by the Federation CJA, the Centre for Israel and Jewish Affairs (CIJA) and the Margaret and Sylvan Adams Family Foundation.

Haley, a possible candidate for president in 2024, praised the historic impact of the Abraham Accords and the progress made in establishing diplomatic relations between Israel and its neighbors.

“The Abraham Accords was the point in time the Emiratis had the courage to tell their constituency the truth about Israel,” she said. “And it has transformed the region.”

Philanthropist Sylvan Adams took the opportunity to thank former Haley for her dedication and friendship to the Jewish community.

“Today, the Jewish community around the world is suffering from an increase in antisemitism, and Israel remains on high alert from the growing Iranian nuclear threat,” said Adams.

Gail Adelson-Marcovitz, CIJA national chair, then thanked Adams for his work facilitating advocacy for the Jewish people and Israel.