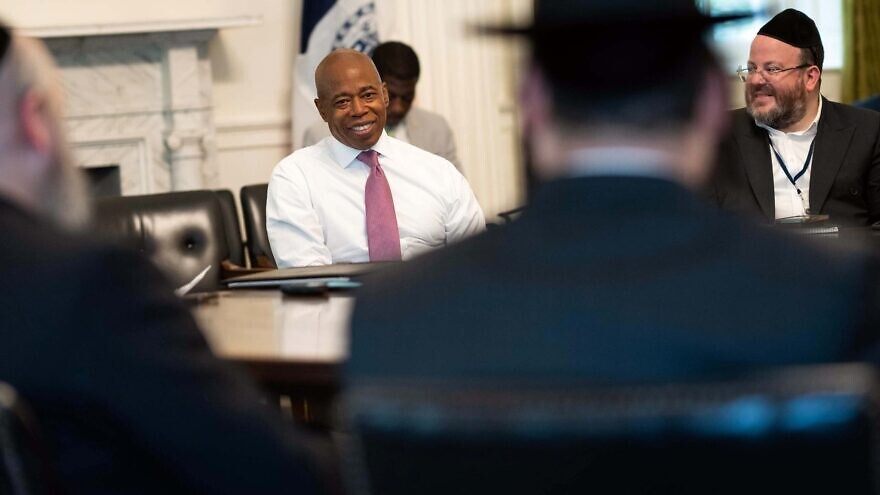 Adams held a roundtable discussion at City Hall with a number of Jewish media outlets. He addressed the city’s broken justice system, caused by recent state legislation whereby perpetrators of hate crimes, along with most other felonies and misdemeanors, are quickly released after arrest without the need to post bail.

Last week, Congressman Ritchie Torres, a Democrat representing the Bronx, wrote to the U.S. Department of Justice asking it to investigate what he called New York City’s failure to prosecute anti-Semitic hate crimes.

“We do need federal assistance. I would love for the federal government to come in and look at some of these hate crime cases—and gun cases—because federal prosecutions can circumvent some of the laws that are on the books now,” Adams told JNS in response to a query about Torres’s letter.

“We’ve had a meeting with both the Eastern District and Southern District [U.S. Attorney’s Offices] to talk with them about it. We believe that there’s going to be some opportunities to get them engaged. The new head of the ATF [the U.S. Bureau of Alcohol, Tobacco, Firearms and Explosives] has been extremely helpful,” the mayor said, referring to Steve Dettlebach, a Jew who took over the ATF in July.

Adams pointed to the need for help from a variety of sectors, both within government and outside it.

“I’m always honest about the help we need. I need my judges to hold people in jail. I need my prosecutors to prosecute cases. And I need my lawmakers to stop making some of these laws that are really allowing dangerous people to continue to do dangerous things in our city,” said Adams.

He noted the assistance the New York Police Department has been receiving from community patrol organizations, including those in Jewish communities throughout the city.

“[The Jewish] community, you have been amazing around the safety patrols. We want to duplicate that. I don’t know of another community that has done it as well as you have,” he said. “We want to now have other communities build those infrastructures, because the more the good guys and ladies are on the street, the more the bad guys are going to be detected.”

Adams built strong ties to the city’s Jewish community during his work as a police captain, a state senator in the heavily-Jewish Crown Heights neighborhood and as Brooklyn borough president. He secured the largest number of endorsements from haredi communities in his run for mayor. 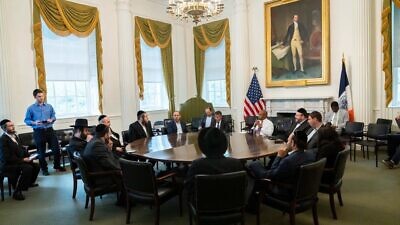 A country that protects criminals

Adams encouraged the journalists in attendance, almost all of whom represented the visibly Jewish Orthodox communities under attack, to deliver a message to their leadership that they need to use their power as a substantial voting bloc to pressure lawmakers.

“I believe you need to send a clear message to those who are making these laws that this is not acceptable. We have turned into a country that spends all our energy on protecting people who commit crimes. What about the people who are the victims of crimes?” the mayor asked.

“All the laws that are passed are based on making sure we protect those who are doing the crime. And so, lift your voices, write the district attorney, write the lawmakers, your city council person, and ask them where do you stand on these issues,” Adams advised, while encouraging the Jewish media to continue writing about what he decried as a broken criminal justice system.

Members of his staff, including Eisdorfer, were recently in Israel for a series of meetings, in part to lay the groundwork for Adams’s first visit as mayor. While he didn’t reveal on Monday when he intends to travel to the Jewish state, he told JNS that the relationship between the city and Israel is strong.

“I look forward to my next trip to Israel. I have enjoyed every time I go to Israel and I learn something new,” said Adams, whose office helped to launch a climate tech center in his city in conjunction with Jerusalem Venture Partners. “We have been working closely with Israel-based tech companies and there are great ideas coming from Israel that we’re looking to incorporate here in the city.”