(August 26, 2022 / JNS) Outside of Germany, most Jews have not heard of the German media outlet Achgut, short for “Die Achse Des Guten,” translated as “the Axis of Good.” It doesn’t have the name recognition of the legacy media outlets like the left-wing Der Spiegel or the pro-Israel tabloid, BILD. But in Germany, it has a cult following and is best analogized to the Daily Wire in America. (In full disclosure, I’m a contributor to Achgut.)

Its co-founder and lead columnist is prominent Jewish intellectual Henryk Broder. Known for his biting satire, Broder, 76, has authored the book The Eternal Anti-Semite and countless essays on the failings of modern Germany in fighting anti-Semitism. Achgut is arguably the most pro-Israel and pro-Jewish publication in Germany, featuring articles favorable to Jewish presence in Judea and Samaria—a position considered anathema to the German political mainstream. Most German publications are publicly funded. Not Achgut.

“We started it 18 years ago simply because we’re journalists, and we wanted to have a playground of our own. No editors and agents in between. It took some time, and now it’s really very successful,” said Broder in a telephone interview from Berlin. Achgut boasts more than 1 million unique views a month.

The son of Polish Holocaust survivors, Broder had been a celebrity intellectual across political lines until he questioned Merkel’s decision to welcome over a million refugees/migrants from Middle Eastern countries. Concomitantly, Achgut has not shunned the right-wing party that opposed the policy, Alternative for Germany (AfD). Rather, it treated it as a legitimately elected German party just as worthy as the others of either censure or praise when due. Broder spoke to the AfD at the Bundestag in 2019, giving the party a chance while also calling them to task for some of their leaders’ downplaying of the Holocaust. This put Broder and Achgut at odds with legacy Jewish institutions as well; they’ve called on German Jewry to ostracize AfD.

Since then, Broder and Achgut have been smeared as “right-wing,” the worst epithet in Germany, recalling, however erroneously, Germany’s dark past. Among his fans, Broder became an even more important mouthpiece, especially on Jewish issues. But to the left-of-center, he fell from grace. 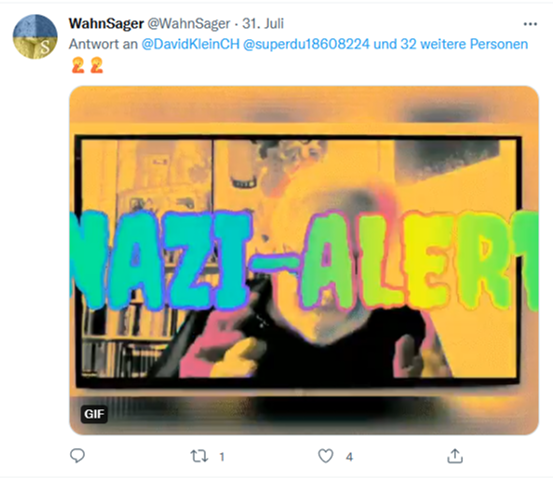 The words “Nazi-Alert” over a photo of Henryk Broder. Source: Twitter.

The analogy to the Daily Wire (DW) has become more real in recent weeks when Achgut became the alleged target of corporate “cancel culture” as Audi (a subsidiary of Volkswagen) and Eurowings (a subsidiary of Lufthansa) pulled ads from the site following a campaign by Twitter activists. DW had fallen victim to similar “cancellation” last year by Harry’s razor-blades company. Harry’s had responded to an anonymous tweeter denouncing DW for airing “homophobic and transphobic” content. DW CEO Jeremy Boreing took revenge by starting his own razor company with a bombastic viral YouTube commercial and whose domain is: “ihateharrys.com.”

Achgut’s enemies seemed to have taken a lesson from the trolls who targeted DW. The Twitter handles of its “informers” generally don’t have a name attached to it. They simply tagged Audi and Eurowings, asking them: “Are you sure you want to run ads in Achgut?” They point out Achgut’s “misdeeds” as being coronavirus and climate-change “deniers,” and attach screenshots of Achgut columns accordingly.

Indeed, Achgut has been one of the few media outlets questioning lockdowns and vaccine mandates. Audi and Eurowings publicly tweeted back along the lines of: “Thanks for the tip! We have looked into it, and this site will be blacklisted.” Audi allegedly got the ad company, Taboola, to cancel its contract with Achgut.

Broder was shocked that a company would follow an anonymous tip this way. “For me, it’s like calling the police because your neighbor is hiding Jews in their basement,” he said.

Achgut provided Audi with its own “tips.” It turns out that this group of informers attacked Broder online with anti-Semitic tropes. One posted “Nazi Alert” over a picture of a menacing-looking Broder; another “informer” referred to him as “The Jew Broder”; another accused him of exploiting his “persecuted” Jew status. (Some have been deleted.)

“They’re becoming anti-anti-Semites but only as far as I’m concerned,” said Broder.

But could an attack on him be considered an expression of anti-Semitism?

“Of course, they don’t expressly attack me as being a Jew,” said Broder. “They don’t do that anymore, but the sound makes the music.”

An Audi spokesperson offered its reasons for the decision. “Like every company, AUDI AG continuously analyzes and adapts advertising activities. This is done on the basis of criteria such as reach, measurable customer contact and communication goal.”

In the case of Eurowings, the ad was placed automatically on Achgut by the online advertising company it engages. A spokesperson said Eurowings was not involved in the controversial social-media discussions that ensued, which “had nothing to do with the Eurowings product range or the content of statements or promises made by Eurowings,” he said. “Against this background, we decided to suspend the placement of advertising there. This decision is not to be understood as an evaluation of the editorial content of the portal, nor does it call into question the integrity of the publisher or other authors publishing there.” 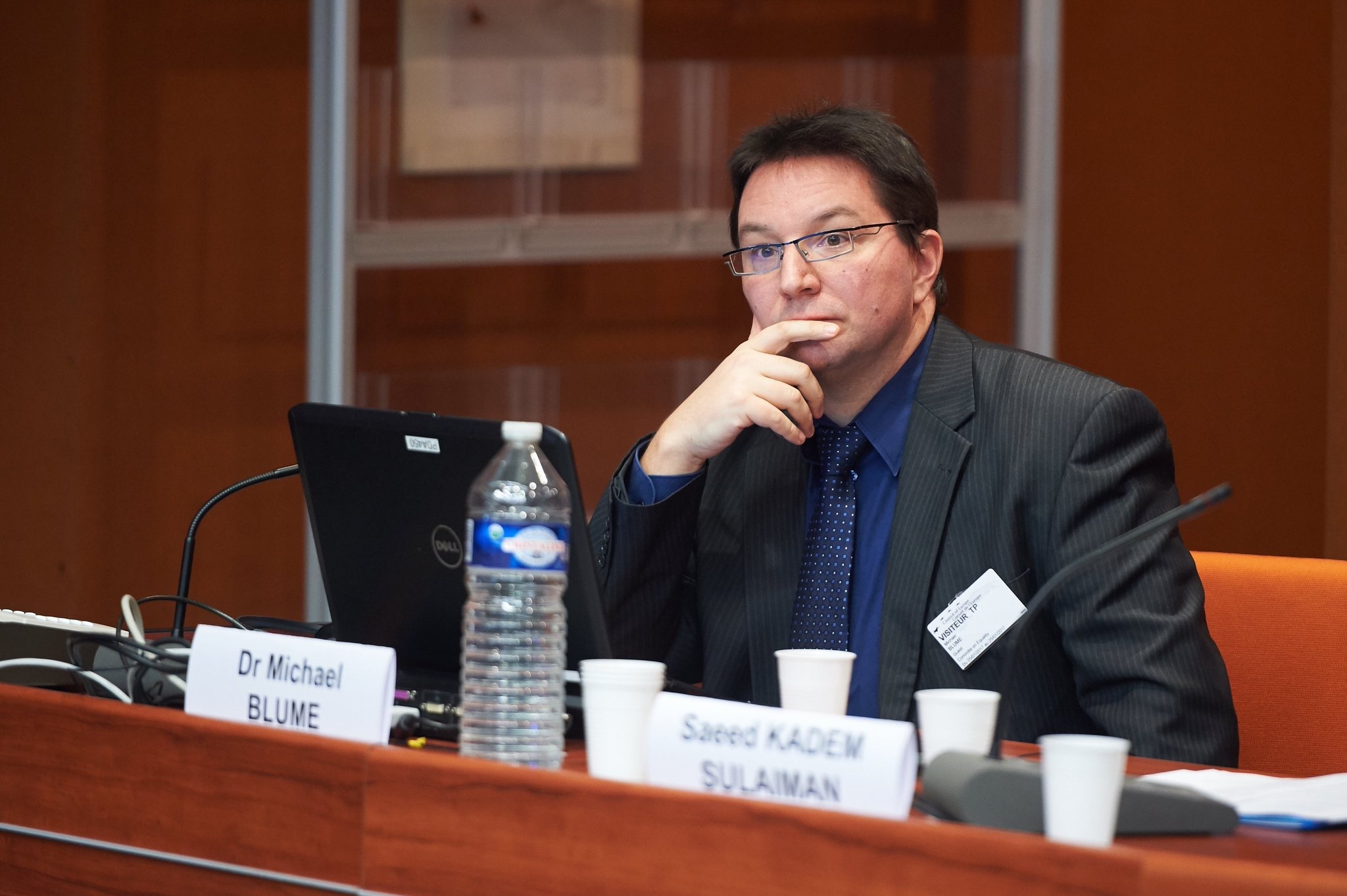 In another Jewish twist to the case, the beleaguered anti-Semitism commissioner of the federal state of Baden-Württemberg praised the boycott against Achgut, demonstrating a strange intersectionality of German politics, “woke” corporate culture and anti-Semitism.

Anti-Semitism Commissioner for the German state of Baden-Württemberg Michael Blume (who is not Jewish) is charged with fighting anti-Semitism, but Achgut has been one of Blume’s harshest critics, along with the Simon Wiesenthal Center, which named Blume one of the “Global Top Ten Anti-Semites” of 2021. Blume has been found to like tweets comparing Zionists to Nazis and has failed to crack down on entities in his region supporting BDS or the Iranian regime. Most recently, he called the late British Gen. Orde Wingate a “war criminal” and “British murderer.”

Blume has used his office to attack Broder as a “right-wing troll” and Achgut as “racist” and “anti-democratic.” Through its official Twitter account, Blume welcomed Audi’s decision to blacklist Achgut, which, according to Achgut, constitutes a violation of the political neutrality to which state officials must adhere. Achgut has taken legal action.

Broder is disheartened that Germany has not learned lessons about politically-motivated boycotts.

“And it’s really a kind of German pattern,” he said. “In a normal country with normal social structure, someone who writes an anonymous denunciation would not be taken seriously.”

In the case of Eurowings, Broder is contemplating fighting back by rallying in front of its parent company Lufthansa with a retaliatory “Don’t Fly Lufthansa”-style campaign. Incidentally, Lufthansa already had a run-in with anti-Semitism when its employees prevented Jews from boarding a flight because several didn’t follow mask-wearing protocol. While it’s easier to make razors rather than cars or airplanes, Broder might consider having a conversation with DW’s Jeremy Boreing to come up with a more lucrative and razor-sharp retaliation.