(February 1, 2021 / JCPA) Since October 2019, the world has witnessed the dismemberment of Lebanon. Lebanon’s confessional system was established in 1943 when a national covenant distributed the top positions of the state among the three main communities that constituted modern and post-colonial Lebanon. It is now being dismantled.

Although this covenant was amended in 1990 at the end of a civil war that lasted 25 years, it became obvious that the balancing arrangements reached then were no longer valid in light of the demographic changes that had occurred in Lebanon. The imbalance placed great strains on the state and attracted foreign actors, who have been attempting to take control of Lebanon, one after the other, since the end of the fifties: Egypt, the PLO, Syria, Israel, and finally, Iran.

However, unlike in the past, when the foreign presence grafted itself onto the country artificially with the collaboration of a local actor, Lebanon today is under direct Iranian influence through its local proxy/client/ally, the Shi’ite community led by Hezbollah and Amal, who represent more than one-third of the Lebanese population. Gone are the days when a U.S. Marines battalion could change the political map in Lebanon. Forgotten are the days when the colonial power, France, could dictate the country’s political agenda.

It took almost 40 years since Hezbollah’s inception (with close Iranian guidance) to change the balance of power in Lebanon and, through a quisling Maronite president who owes his job to Hezbollah, to take the reins of power in a country now free of Syrian and Israeli military presence.

Knowing the Lebanese system’s intricacies, Hezbollah took advantage of corrupt politicians and a corrupt system to deepen its hold on Lebanon by creating alternatives to the failing state. Israel’s unilateral withdrawal from Lebanon under Hezbollah’s military pressure in May 2000 and Hezbollah’s so-called “divine victory” against Israel in 2006 transformed the organization from a petty local militia into a national and Arab hero, a fact that allowed Hezbollah to deepen its influence on the political system in Lebanon. Under Iranian sponsorship, Hezbollah achieved a position never before reached by any political faction in Lebanon, which enabled it to dictate the political agenda as it pleases Tehran. 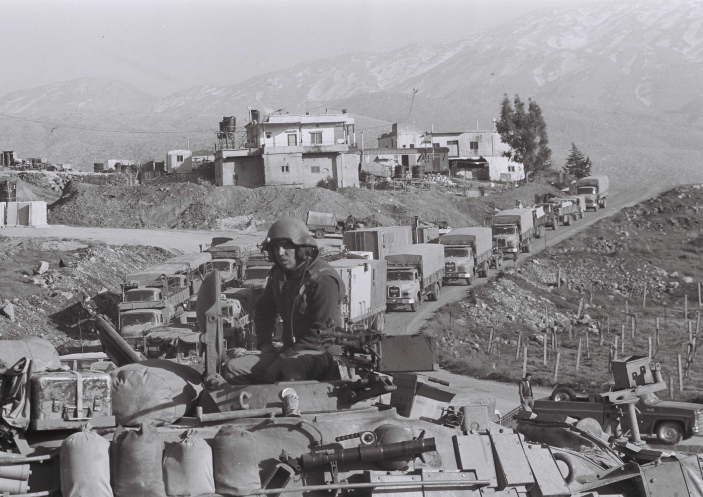 Israeli soldiers pulling out from the area of Beirut, Lebanon, towards the Awalli River, Feb. 28, 1985. Photo by Yossi Zamir/Flash90.

As a matter of fact, Hezbollah is the only Lebanese militia that retained its weapons and military formations—in open defiance of all United Nations resolutions following the Second Lebanon War in 2006. Furthermore, as a lesson from this war, Hezbollah enacted an Iranian-inspired program and built a missile force that includes more than 150,000 missiles of all sizes and ranges, with a special emphasis on long-range precision weapons capable of hitting targets deep inside Israeli territory.

Hezbollah went as far as planning operations to conquer Israeli settlements in the upper Galilee facing the Lebanese border. They dug tunnels (now believed to have been neutralized by Israel) which were intended to allow its elite forces to cross into Israeli territory to conquer parts of the Galilee. 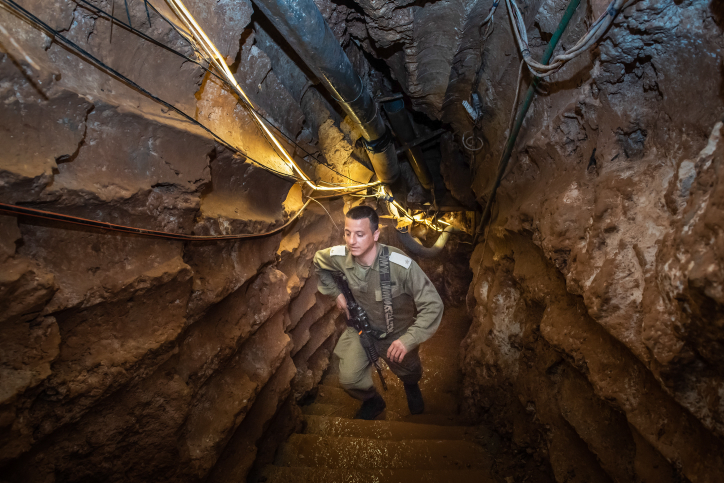 An Israeli soldier stands in a Hezbollah tunnel that crosses from Lebanon to Israel, on the border between Israel and Lebanon in northern Israel on May 29, 2019. Photo by Basel Awidat/Flash90.

However, beginning in 2012, Hezbollah’s military intervention in Syria at Tehran’s behest generated serious cracks in the Lebanese system: Hundreds of Hezbollah fighters from Lebanon were killed or wounded, and their funerals were featured on restive social media.

The economic crisis erupted at full intensity at the end of 2019. The spiraling effects hit almost every sector and spared only the alternative state established by Hezbollah.

The Mediterranean ‘playground’ is now a wreck

Now, one year later, Lebanon is a failed state with half of its population under the poverty line, while “extreme poverty” (people living on less than $14 per day) has increased from 8 percent in 2019 to 23 percent in 2020. That means that out of a national population of six million, the total number of poor is currently 2.7 million. Moreover, since the beginning of the protests, a new wave of migration has struck Lebanon, and hundreds of its physicians, scientists, academicians—whoever can afford to cross the Mediterranean—are fleeing to Europe, Africa and the Americas. 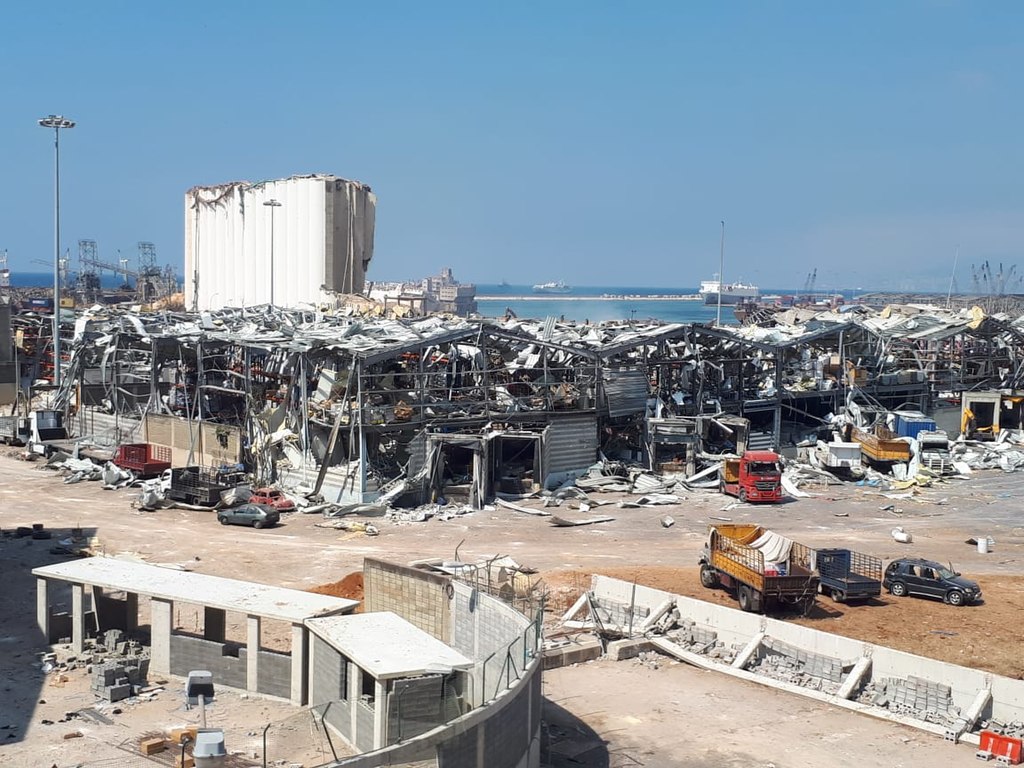 The day after the Aug. 4, 2020 explosions at the Port of Beirut in Lebanon. Credit: Freimut Bahlo via Wikimedia Commons.

The political quagmire has not changed. Since the resignation of the Diab government in August 2020 following the devastating explosion in the Beirut port, Lebanon has been without a government. Potential international donors have not intervened to help the dying economy because of the political impasse, Hezbollah’s political involvement and the government’s inability to initiate and adopt the reforms required by the donor countries. By the end of January 2021, the COVID-19 pandemic and the severe economic crisis had pushed the Lebanese into the streets, where the security forces are firing live bullets to quell the protests and mobs are hurling hand grenades and Molotov cocktails against the police, army, and security forces. 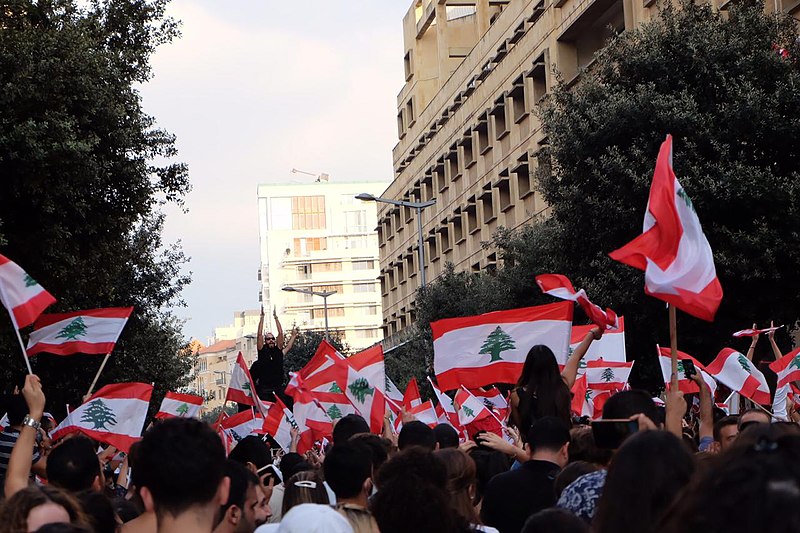 In this dire situation, there is only one winner so far—Hezbollah, which has tightened its grip on the country’s Shi’ite community and the poor. Through its parallel system, Hezbollah maintains, feeds, finances, educates and provides healthcare, a banking system and specialized supermarkets for its members. It even extends loans, despite the U.S. sanctions targeting its financial system. Hezbollah holds the key to the formation of the government as it is perceived as the real arbitrator in the Lebanese body politic.

However, Hezbollah’s special position has triggered resentment, and large parts of Lebanese society are angry that Hezbollah has used its militia to attack protesters and quell rioting against the economic situation. Hezbollah is no longer a national consensus issue in Lebanon, and its activities and positions are scrutinized by harsh critics who accuse Hezbollah of being the ultimate source of the country’s constitutional crisis.

What are the options?

Lebanon expects a miracle that is not about to transpire. Instead, there are three potential options:

1. Civil war. The country’s militias are preparing themselves for such a scenario. Such a conflict could be the extension of the previous civil war, which came to an end in 1990 and redistributed power among the various sectarian parties. Such a war could create a situation in which foreign powers intervene to come to the rescue of their respective clients. Lebanon would then become the theater where the conflict between Saudi Arabia, Iran, Russia, Israel, the United States, and other parties is waged. The end of this scenario is not foreseeable.

2. Cantonization. If civil war again breaks out in Lebanon, it is likely that the central government will not be able to end the hostilities. As a result, the territorial partition of Lebanon will surface again, with Mount Lebanon being the Christian canton; the western part of Beirut, which includes the Hezbollah-controlled Dahiya neighborhood, South Lebanon, and the Bekaa Valley up to the northern border with Syria would be a Shi’ite-dominated canton; and the Chouf (south of Mount Lebanon) would be a Druze stronghold. The Sunnis would have parts of Beirut, Sidon and Tripoli, the capital of the north.

Such a partitioning of the country, which reflects the present situation in Lebanon, would not mean the end of the central government. It would survive—but without any prerogatives or influence. It would remain as a symbol, and refrain from engaging troops on behalf of any of the parties. Fear of Lebanon’s government disappearing could ignite a confrontation among the various communities over Lebanon’s political identity.

3. Open conflict over Lebanon’s identity. In such an eventuality, one could easily envision an attempt by Hezbollah to take over Beirut and impose itself on the Lebanese by force. The Lebanese army does not stand a chance in a confrontation with Hezbollah as it is itself split along sectarian military formations. In such an event, one can imagine that Hezbollah’s Iranian patrons would bless such a venture and rush to consolidate Hezbollah’s grip on Lebanon. The outcome of such a scenario is deeply conditional on Israel’s reaction since at present there is no Syrian army capable of intervening as happened in 1976 when rescue was requested by then-Maronite President Suleiman Franjieh.

Lebanon is in transition. The Lebanese body politic is already looking at the next presidential and legislative elections, due in 2022. Will Lebanon’s fate be decided by then?