(May 8, 2019 / JNS) It’s no surprise to read about college students calling for the destruction of Israel. But there’s something particularly painful when they are students at a university named after one of the foremost advocates of the Jewish state. 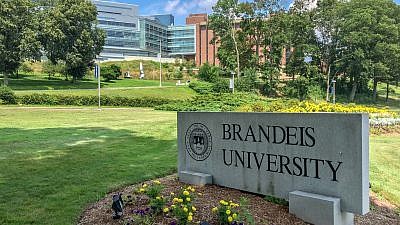 According to the definition of anti-Semitism used by the U.S. government and the European Union, “denying the Jewish people their right to self-determination”—that is, calling for the destruction of the Jewish state—is anti-Semitic.

The hosts of the “Art Over Hate” exhibit painted over the anti-Semitic “FREE PALESTINE” defacement. The anti-Semites quickly returned, pasting a similar sign over the artwork.

The Brandeis Hillel, which hosted the exhibit, has always bent over backwards to provide a forum for every point of view. In the past year, speakers have included Palestinian activists and a Knesset Member from the left-wing Israeli Labor Party.

And to no avail. Israel-haters will never be appeased by concessions. No matter how many speakers at Hillel call for Israeli territorial withdrawals, it won’t be good enough. Because the haters cannot accept the existence of Israel at all.

We don’t know (yet) the name of the individuals who carried out the attacks. We do know the names of the groups on campus that provide the ideological support for such assaults. They make no secret of their views. The radical group “IfNotNow Brandeis” issued a statement at the opening of the art exhibit, accusing the art of being “an embodiment of blatant nationalism.”

Well, that’s right—Israel is an expression of Jewish nationalism. Jews are a nation, there is a Jewish state, and that’s something to be proud of. How sad that the misguided members of IfNotNow are so embarrassed by the existence of a Jewish nation.

As the father of two Brandeis alumni (my daughter Alisa was murdered by Palestinian terrorists in Israel while she was on a leave of absence), I find the response of the Brandeis administration to be woefully inadequate. The administration’s official statement was vaguely headlined “Statement from Brandeis on Events Related to Israel Week.” It blandly acknowledged that “the artwork was vandalized,” “the graffiti was removed,” and then “an unauthorized sign was posted.”

There was no condemnation of the “Free Palestine” slogan. No acknowledgment that calling for Israel’s destruction is intolerable. No pledge to act against campus radicals who promote anti-Israel hatred.

Louis D. Brandeis, the university’s namesake, was America’s foremost Zionist leader in the 1920s and 1930s. He denounced England’s decision to separate 78 percent of eastern Palestine from the rest of the country (the area that became the kingdom of Jordan). He opposed England’s 1937 Peel Plan to divide western Palestine into Arab and Jewish states. He praised the Jewish activists who smuggled European Jews into the country in defiance of the British. He fought for the integrity of the Land of Israel. He was a proud Jewish nationalist.

What would Justice Brandeis think about the fact that the university bearing his name is today home to vicious, law-breaking haters of Israel and Jewish nationalism?

Brandeis is a private university. It can establish whatever criteria it chooses for the admission of students. Perhaps it’s time for the application to include the question, “Do you support or oppose the existence of the State of Israel?,” accompanied by an explanation that any enrolled student who is subsequently found to have been untruthful on any part of the application will be expelled and required to repay any scholarship funds that he or she received.

I suspect that would go a long way towards addressing the disturbing problem of Israel-haters at Brandeis.

Stephen M. Flatow, an attorney in New Jersey, is the father of Alisa Flatow, who was murdered in an Iranian-sponsored Palestinian terrorist attack in 1995. He is the author of “A Father’s Story: My Fight for Justice Against Iranian Terror.”