(November 3, 2020 / JCPA) Tensions between Mohammad Dahlan supporters and Mahmoud Abbas loyalists have escalated in the West Bank. In Ramallah, Palestinian Authority security forces entered the al-Am’ari refugee camp, close to the city center, to arrest Dahlan supporters and quash the potential for an armed takeover of Ramallah. In the Balata refugee camp in Nablus, one of Dahlan’s senior commanders was killed on Oct. 31.

The tensions came to an explosive head because of the peace agreements between Israel and the Gulf states and reports that Dahlan is affiliated with the Emirates.

In eastern Jerusalem, Dahlan supporters were expelled from the ranks of the “official” Fatah, but they are organizing separately. While Ramallah mobilizes violent underworld elements, the Dahlan people are organizing around former Orient House personnel, who represented the “inside” Palestinian leadership against the “outside” Fatah leaders from Tunis who arrived after the Oslo Accords.

It is a mistake to view the competition for the Palestinians’ leadership as just a battle of personalities. The example of eastern Jerusalem illustrates that the real struggle is between the local Palestinians and the “outside” Tunis leadership imposed on them during the Oslo Accords.

Former Palestinian Fatah Party lawmaker Mohammed Dahlan, who is viewed as a potential successor to Palestinian Authority leader Mahmoud Abbas, speaks to the media in December 2006. Photo by Michal Fattal/Flash90.

Israel could never have closed the Orient House in Jerusalem in 2001 that served as the PLO’s Jerusalem office under Jerusalemite Faisal Husseini if not for the actions of the main PLO headquarters in Ramallah. Under Arafat, the Palestinian Authority had already abolished the Orient House’s authority, minimized its standing and clipped Husseini’s wings and budget. Israel was just the official locker of the gate. Faisal died in Kuwait in May 2001; Israel closed the gates in August 2001.

Today, the old Orient House is regrouping, and this time it is re-forming to oppose the leadership in Ramallah.

The issue of the struggle versus Dahlan also emerged as a significant topic in the recent fake reconciliation talks between Fatah and Hamas in Turkey. Fatah asked Hamas to cooperate against Dahlan, and Hamas refused! 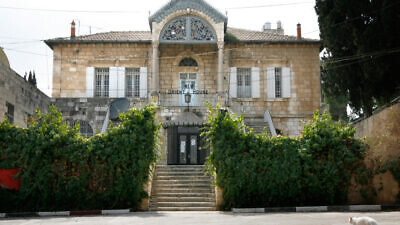 There are many reasons for Hamas’s refusal, but one of the critical reasons is that Hamas also feels itself to be “inside” and not “outside.” In the Ramallah district, for example, the large Barghouti family is willing to cooperate with Hamas more than with the Muqata’a, the P.A.’s offices. The fact that Marwan Barghouti, the symbol of the internal leadership, is still languishing in prison and the Tunis leadership group has not lifted a finger for him says it all.

Pinhas Inbari is a veteran Arab affairs correspondent who formerly reported for Israel Radio and Al Hamishmar newspaper. He currently serves as an analyst for the Jerusalem Center for Public Affairs.