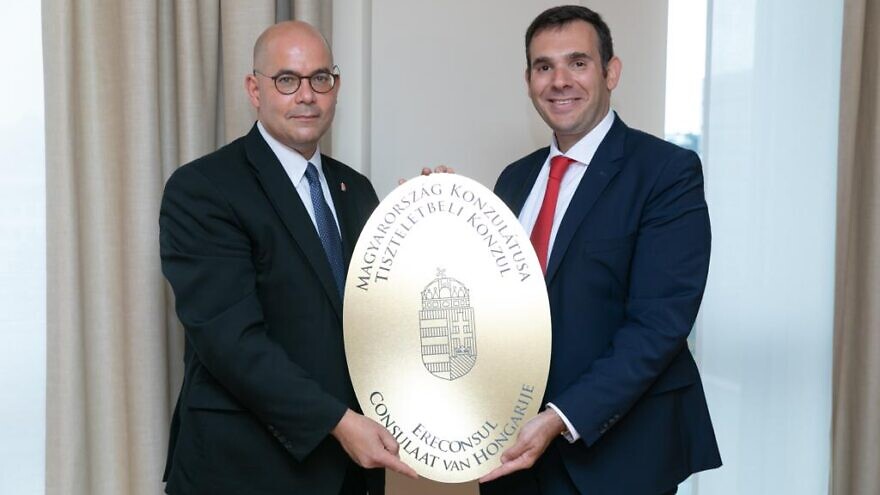 (October 20, 2021 / JNS) A Hungarian consulate just opened in Antwerp with Orthodox Jew Ari Epstein inaugurated as its honorary consul. Epstein, a law and INSEAD business-school graduate, is charged with promoting bilateral relations between Hungary and Belgium, and aims to facilitate engagements on an economic, commercial and cultural level with political bodies, commercial organizations, nationals abroad and citizens of Hungary in Belgium.

The current CEO of the Antwerp World Diamond Centre (AWDC), the umbrella organization representing Antwerp’s thriving diamond community, Epstein holds both Belgian and Hungarian citizenship and is an Antwerp native.

Each of his grandparents spoke Hungarian, and his grandmother was born in Hungary, Epstein told JNS: “This appointment brings me, quite literally, back to my roots.”

The grand opening of the consulate on Oct. 14 took place in the presence of many dignitaries, including Tamás Iván Kovács, Hungarian Ambassador to Belgium and Luxembourg; Emmanuel Nahshon, Israeli Ambassador to Belgium and Luxembourg; Antwerp Mayor Bart De Wever; Jewish Belgian Parliament member Michael Freilich; in addition to business leaders and captains of industry.

The opening of the consulate, maintained Epstein, “underpins the deep historical roots between Antwerp’s Orthodox Jewish community and Hungary, and a revival and celebration of our ancestry and heritage.”

According to Epstein, a wave of migration of Orthodox Jews from Hungary to Belgium at the end of the 19th century led to the establishment of a vibrant and growing Orthodox Jewish community in Antwerp, prior to and especially after World War I.

Youth development and creative projects officer for the European Jewish Association (EJA) Ethan Gabriel Bergman, 22, also an Antwerp native, told JNS that the Antwerp Jewish community is around 20,000-people strong with denominations ranging from secular Jews to Chassidic Jews. The community has five schools of varying denominations and an active presence of youth groups.

Antwerp is home to a significant Jewish population: Of the estimated 25,000 Jews living there, nearly half are Chassidic and mostly concentrated in one neighborhood in the city. More than 50 percent of them have roots that can be traced back to the Hungarian empire and modern-day country, say locals.

Jewish individuals of all denominations represent a vital part of Belgian society, Freilich told JNS; as a Jewish Member of Parliament, he is an example of that very statement. The assignment of Epstein, said Freilich, underlines the position that “Jewish individuals play an active role in various businesses and industries throughout Belgium.”

“There is booming Jewish community” in both Belgium and Hungary, he added, and “Jews integrated perfectly in both societies.” 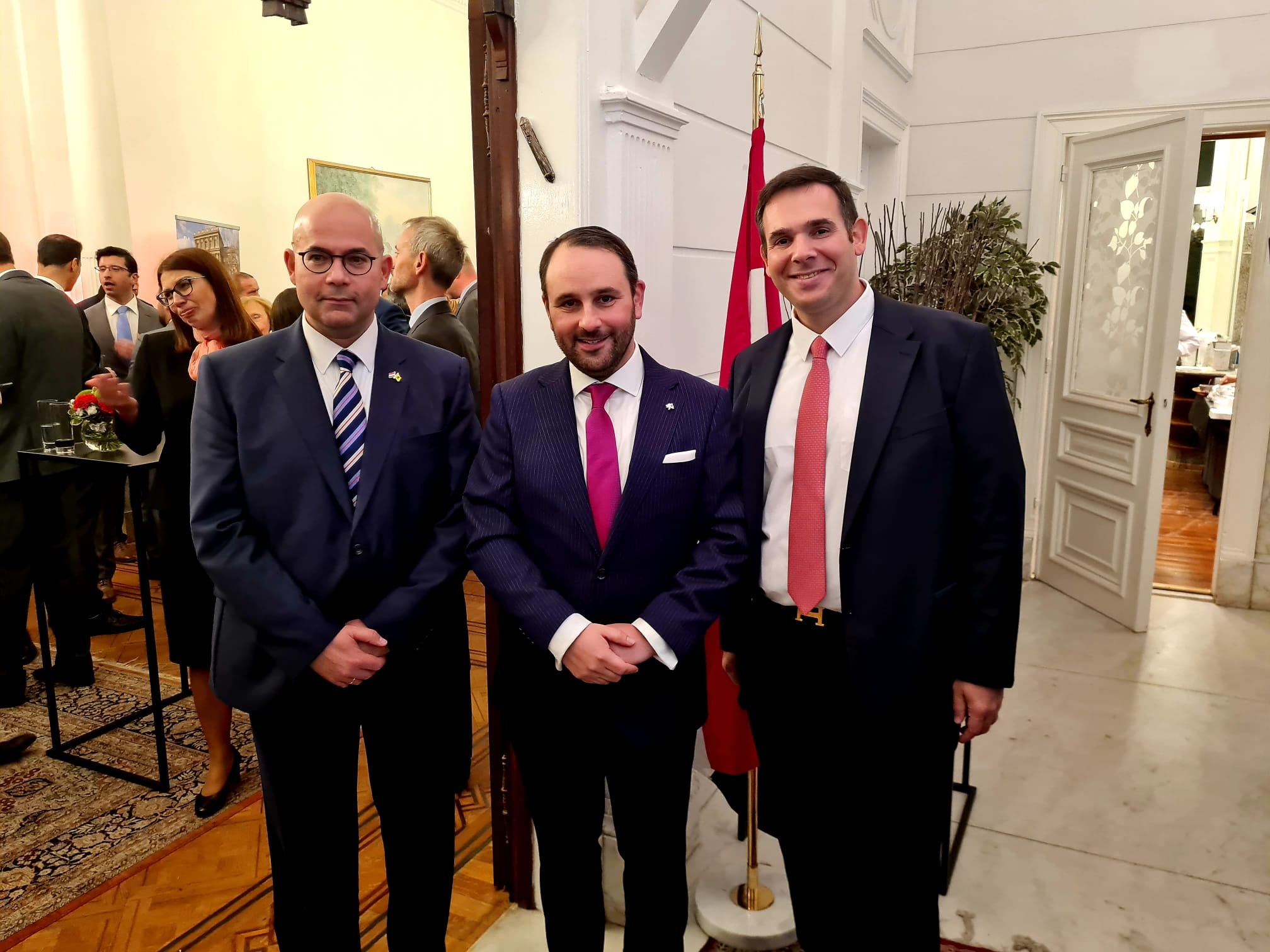 Slomó Köves, leading Hungarian Orthodox rabbi and initiator of the Europe-wide anti-Semitism study, expressed his delight at the assignment, and identified Epstein as “the only religious Jew who is a consul of a country outside of Israel.”

In addition to anti-Semitic perceptions, a number of violent attacks and legislative injunctions against Jews have been reported in the past decade. In May 2014, a French jihadist murdered four people at the Jewish Museum of Belgium. In September of that year, two days after the museum reopened, a synagogue was set on fire by an arsonist. In 2017, a law in Belgium’s Flanders region prohibited religious slaughter, including kosher ritual slaughter without stunning, and in 2019, the regional parliament of Wallonia followed suit.

Epstein acknowledged that the outlawing of ritual slaughter in regions of Belgium “saddens the entire Jewish community to see that we are misunderstood to a point where we aren’t able to consume locally slaughtered kosher meat like we used to do for almost 1,000 years.”

Though rising anti-Semitism is a concern for Belgian Jews, maintained Bergman, “achieving representative success” can be viewed as a positive step forward in maintaining Jewish life and security.

‘Reconnecting to Hungarian heritage for Jews across the globe’

One of the first steps Epstein took was to launch a Jewish genealogical institution—the World Institute for Jewish Hungarian Ancestry (WIJHA)—and house it in the new consulate. The goal of the institute is to continue building the collective memory of Hungarian Jewry, as well as Jewish communities throughout the world. According to Epstein, more than 1 million Jews around the world have Hungarian-speaking ancestry.

The institute will also focus on ancestral connections between Antwerp’s Jewish communities and Hungary, serve as a meeting point for Jews across the globe to reconnect with and explore their Hungarian ancestry.

“It shouldn’t come as a surprise that over the past decade, many Jews in Antwerp and beyond have rekindled an interest in their own personal roots, a great many of them taking up the pilgrimage to visit one of the thousands of ancient Jewish burial grounds located in Hungary and even restoring several of these sites,” said Epstein, who explained that while “consular posts are economic and cultural outposts, adding to a government’s promotion of bilateral trade,” the position “also means to identify cultural and public relations opportunities.”

“It is my ambition to facilitate this reconnection with our rich Hungarian heritage for Jews across the globe through the establishment of the WIJHA,” he said. “Through my appointment, I believe Hungary wishes to show respect to the members of the Jewish Hungarian Diaspora.

Köves similarly looked forward to the establishment of WIJHA “as a means to create relationships and a network between Belgium and Hungary,” and preserve the collective memory of the 400,000 to 500,000 religious Jews with Hungarian ancestry. “I strongly believe this is an important resource to help Jews in Hungary and strengthen Jewish identity in Hungary.”