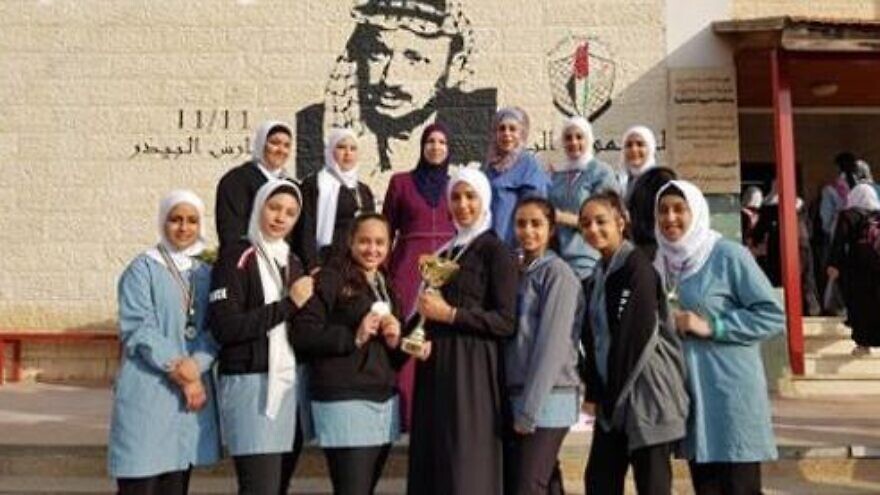 Palestinian girls pose in front of their school in Bethlehem on Nov. 19, 2019. Visible on the wall by the school entrance is a plaque honoring Ayat al-Akhras, an 17-year-old suicide bomber that killed two Israelis in 2002. Credit: Palestinian Media Watch.
Spread the word.
Help JNS grow!
Share now:

(December 5, 2019 / PMW) A Palestinian Authority-run girls’ high school in Bethlehem recently unveiled a plaque in memory of the “martyrs” of the second intifada (2000-2005), in which more than 1,100 Israelis were murdered, many in suicide bombings.

An initiative of the P.A. Education Ministry and Fatah’s Shabiba Youth Movement, the memorial, which is prominently displayed at the entrance to the school, specifically names suicide bomber and Fatah member Ayyat al-Akhras, who blew herself up near a Jerusalem supermarket on March 29, 2002.

These included Dalal Maghrabi, who participated in and by some accounts led an attack in which 37 Israelis were killed, 12 of them children; Abu Jihad, responsible for the murder of 125; Marwan Barghouti, convicted of planning three terror attacks in which five people were murdered; and Hamas founder Ahmed Yassin, responsible for the murder of hundreds in Hamas suicide bombings.

A version of this article was originally published at Palestinian Media Watch.