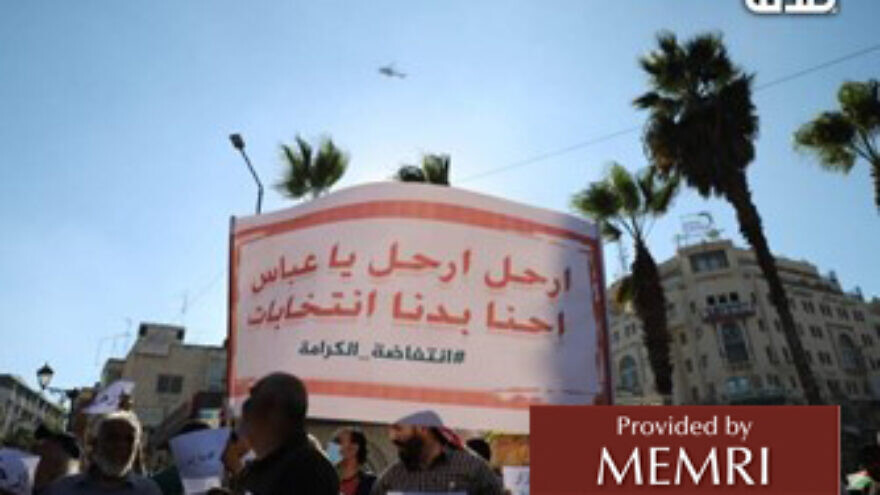 A sign at protests in Ramallah in the West Bank: “Down with Abbas, we want elections!” Source: Qudsn.net via MEMRI, July 11, 2021.
Spread the word.
Help JNS grow!
Share now:

(August 11, 2021 / JNS) Ongoing Arab protests in recent weeks in the West Bank against the Palestinian Authority over the killing of opposition activist Nizar Banat by security forces have led to heavy criticism of the P.A. for suppression.

According to a report by the Middle East Media Research Institute (MEMRI) published on Tuesday, the protests have expressed deep dissatisfaction over ongoing corruption and the absence of democracy. The unrest followed the decision this spring by P.A. head Mahmoud Abbas to postpone elections out of a fear of losing to other factions.

Denouncing the authorities, protesters have chanted for the “overthrow of the regime.”

In response, the P.A. has launched counterprotests where Fatah members claimed the opposition is “a coup attempt led by Hamas.” For example, Fatah’s deputy chairman, Mahmoud Al-Aloul, said at a Ramallah rally: “Don’t provoke Fatah, for we will not show mercy to anyone!”

In response, according to the report, the Palestinian press has strongly criticized Fatah’s handling of the Banat incident and the conduct of the movement’s officials.

Articles by academics and intellectuals, as well as by current and former politicians, have voiced disappointment that Fatah, which was originally founded as a national liberation movement, has become a ruling party that they say “blindly defends the P.A. against legitimate criticism.”