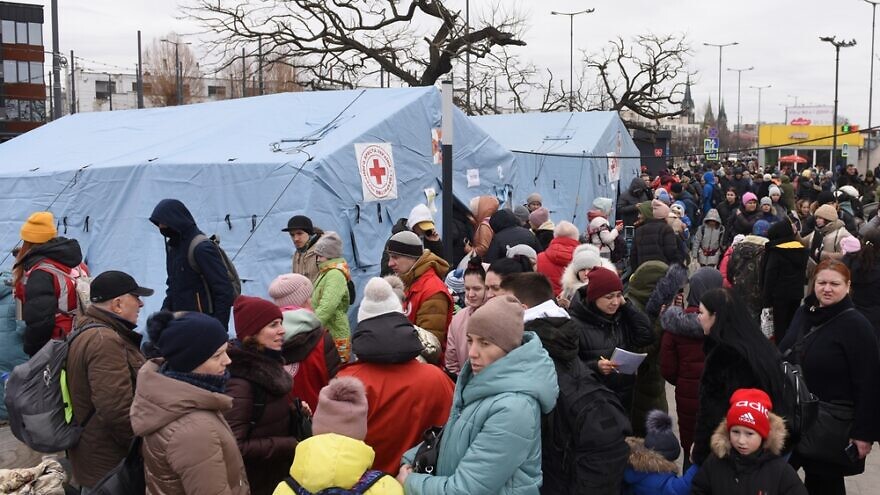 (March 25, 2022 / JNS) The administration of U.S. President Joe Biden announced on Thursday that it would welcome up to 100,000 Ukrainian refugees. It’s something the American Jewish community pushed for, and the application and absorption process is something they have been preparing for in advance.

Hours after the announcement, the Jewish Federations of North America (JFNA) hosted a webinar outlining to American Jews how the refugee system works and how they can facilitate the process.

“I want to say that I continue to be inspired by the professionalism of the main organizations of the Jewish community that are on the ground doing this [refugee assistance] work,” said JFNA President and CEO Eric Fingerhut.

“This crisis is going to be long and deep—not just for Jewish community members, but for others. The millions of mothers and children who have left Ukraine but who don’t want to go too far away because they don’t want to leave their husbands and fathers of the children … we are gaining much greater expertise into how we can be helpful,” said Fingerhut, who explained the JFNA will work in partnership with HIAS, one of a very limited number of national refugee resettlement providers.

JFNA was active in lobbying Congress recently to push the Biden administration into opening America’s doors to Ukrainian refugees in a similar vein to refugees from Afghanistan in the wake of last summer’s takeover by the Taliban there.

Recent estimates indicate there some 3.5 million Ukrainians have fled the country. While most will want to stay in the region and return when it is safe, it has become evident that neighboring countries are struggling to absorb them with some nearing their breaking point, even as the Russian invasion continues.

The Biden administration released few details as to how it would go about executing its Ukrainian refugee program.

‘How will they be settled?’

Darcy Hirsh, JFNA’s managing director of public affairs, said that a number of refugees could be accepted through the Lautenberg Program, a family reunification program that allows certain individuals legally residing in America to bring their family members in through the U.S. Refugee Admissions Program.

First enacted in 1990 to facilitate resettlement of Jews from the former Soviet Union, it was expanded to include persecuted religious minorities in other countries, including Jews, evangelical Christians, Jehovah’s Witnesses, Ukrainian Greek Catholics and members of the Ukrainian Autocephalous Orthodox Church. Applicants must have immediate relatives in the United States. Hirsh estimated that some 17,000 Lautenberg applications are in the pipeline.

A citizen or lawful permanent resident of the United States may also file Form I-130, called a Petition for Alien Relative, to establish the existence of a relationship to certain alien relatives who wish to immigrate to the United States. There are also some Ukrainians who have previously applied for asylum and are waiting for their paperwork to be processed.

By definition, Ukrainian refugees being reunited with their families are largely going to end up in established Ukrainian communities. Hirsh indicated that the metropolitan areas with the most Ukrainians include New York, Chicago, Philadelphia and Los Angeles. According to Hirsh, other Ukrainians not connected to family could be distributed throughout the country to various refugee resettlement agencies.

“Here’s the other critical question: How will they be settled? Will they go through the formal U.S. refugee admissions program, in which admitted refugees admitted are sent to a city where a Jewish Family Services agency or other organization that’s resettling refugees has the bandwidth to sponsor them and settle them in the community?” asked Hirsh. “The other model is private community sponsorship, which was created to support the 75,000 Afghan evacuees that came to the U.S. late last summer, and is a way of lessening the burden on the actual resettlement agencies and allowing community groups to welcome and support refugees by providing direct services to them.

“We know that the administration plans to meet with U.S. resettlement agencies in the next few days. So, these details will be much clearer very soon,” she Hirsh.

‘The calling of the highest moral standing’

The question of whether the Ukrainian refugee program will follow the Afghanistan model is among issues that could heavily shape the American Jewish effort in the coming weeks and months. Those who came from Afghanistan technically came in as humanitarian parolees, rather than through the formal refugee resettlement program. As such, they didn’t receive the same level of government funding generally issued.

“And the provider agencies that agreed to take those [refugees] on and to provide resettlement services did not get the same level of government financial support to do that work. Instead, the model that was implemented was one of community sponsorship, and we were very grateful that we had significant funding support,” explained Reuben Rotman, founding president and CEO of the Network of Jewish Human Service Agencies, citing the Shapiro Foundation along with a number of Jewish Federations and a Jewish Family Services agencies that supplemented the limited government funding that was available.

“That motivated communities to begin thinking internally about who else they could bring on to marshal and provide support. So other community organizations like synagogues and churches, recreation centers, youth groups—there’s a whole community model. I do believe that elements of that will be in place once we have more clarity around the Ukrainian-refugee dynamic,” said Rotman, citing funding available for employment support, housing, case management, mental-health services and other basic needs that traditionally are granted through the resettlement program.

Fingerhut noted that “we are doing the groundwork now to determine what this kind of campaign will look like. And to be really clear, we’re not talking about just Jewish refugees.”

“We certainly look forward to welcoming members of the Ukrainian Jewish community to our shores,” he said, adding that “ultimately if the numbers we know are accurate, there’s maybe 200,000 Jews and 3.5 million refugees in total. And, of course, those 200,000 Jews will not all come to the U.S. Our efforts can be focused broadly because Jews care deeply about welcoming refugees. And for us, this is the calling of the highest moral standing especially as we round the corner and head towards Pesach.”