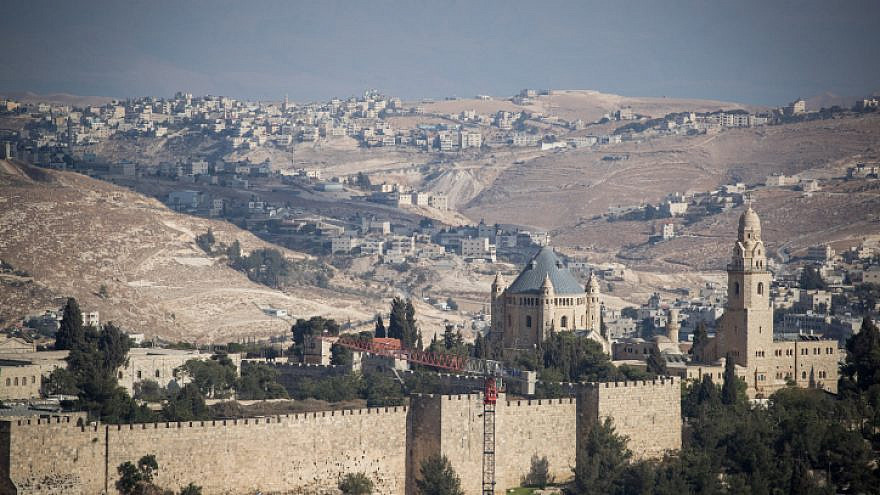 A view of Jerusalem's Old City and the surroundings, including the Church of Dormition, from a rooftop in Jerusalem, Sept. 7, 2018. Photo by Yonatan Sindel/Flash90.
Republish this article
751 WORDS
Spread the word.
Help JNS grow!
Share now:

(March 10, 2021 / JNS) The Regavim Movement, a research-based think tank and lobbying group dedicated to preserving Israel’s resources and sovereignty, has filed a petition against the Jerusalem Municipality, demanding enforcement against what they allege is an illegal subterranean tunnel dug by the Church of the Dormition on Mount Zion in the Old City of Jerusalem.

According to the petition submitted to the Jerusalem District Court, the municipality has been concealing the existence of the more than 100-meter-long (more than 300 feet) underground tunnel that Regavim says encroaches on public property in an area dense with archaeological remains.

The group says that the church dug the tunnel in order to connect it with “Beit Josef,” a nearby dormitory/guest house it built decades ago.

Naomi Kahn, director of Regavim’s International Division, told JNS that “Mount Zion is at the very heart of Jewish history and Jewish heritage. The fact that the State of Israel has not protected the antiquities that we know are there and how the digging of the tunnel has disturbed what’s there is outrageous.

“To dig a tunnel in such a sensitive area without any oversight, inspection or access to the public is insane,” she added. “They had no right to do so to begin with.”

‘May have damaged antiquities and other artifacts’

The Church of the Dormition is one of Jerusalem’s most recognizable landmarks, sitting atop one of the highest points in Jerusalem. The church is included in the historic preservation compound known as the Sovev Homot (“Jerusalem Ramparts”) National Park. The modern church, which was constructed in the early 20th century, rests on the ruins of a Byzantine-era basilica, called Hagia Sion, which was destroyed by the Persians in the seventh century C.E. It’s owned by the German Benedictine order, and was consecrated in 1906 and named for the Virgin Mary as it sits on a site where she is believed to have died.

Nevertheless, Kahn said the lawsuit against the municipality demands enforcement; at the same time, Regavim has filed a “Freedom of Information Petition” in the Jerusalem District Court, calling on the municipality to release documentation as to on-site development.

Attorneys Avi Segal and Yael Cinnamon of the Regavim Movement explained that “when the details began to come into focus, we demanded over and over that the Jerusalem Municipality publicize the documentation of its findings, as required by the Freedom of Information Law. We further demanded that oversight, inspection and law-enforcement procedures be taken immediately to restore the site to its previous condition either by sealing off or demolishing the tunnel. We filed this petition only when our repeated requests to the Jerusalem Municipality were not answered.”

Originally, reported Kahn, the municipality denied the tunnel’s existence. Now, however, “they are saying it’s there, but claiming it’s an old tunnel.”

The statement continued, saying, “The investigation revealed that along the path of the tunnel, there are underground rooms containing ancient artifacts, and the tunnel itself encroaches to a significant extent on public property. This illegal passageway was dug without a permit, violating existing planning codes and Israel’s Archeological Protection Law; without any oversight by engineers or archaeologists, as required by law; and may have damaged antiquities and other artifacts.”

That said, the Israel Antiquities Authority told JNS that it “checked, and as far as we know, there is no such digging.”

At the same time, a Church of the Dormition spokesperson told JNS that he was unavailable to comment on the tunnel, although anticipated that the church would release a statement on the matter shortly.

Of the matter at large, Kahn said “the church should not be allowed to take over public property, especially in the most sensitive site in the world. Israel is responsible for preserving our heritage sites, and we expect the authorities to do their job.”