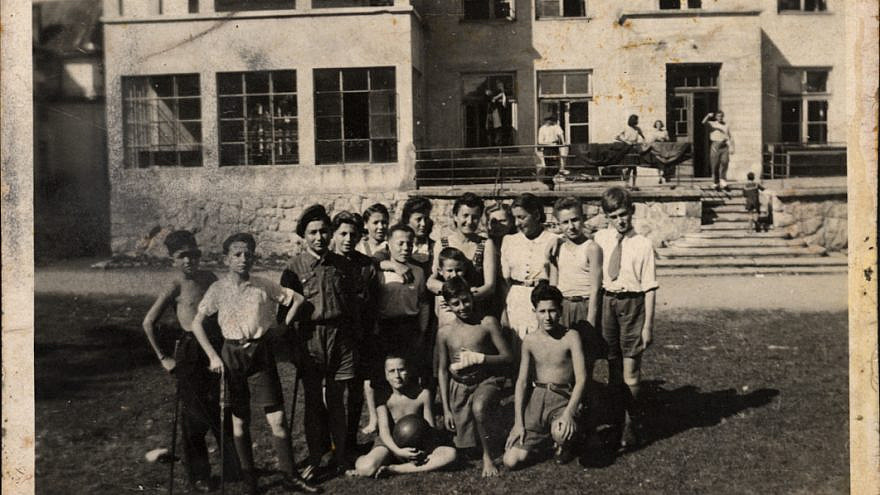 (January 21, 2021 / JNS) It’s been 75 years, but Yaakov Guterman can still recall nearly everything about the nine months he lived in Zakopane, Poland.

He remembers that all of a sudden in this group home for children who’d survived the Holocaust, he had plenty of good food to eat, clean mountain air to breathe, other kids to play with and loving adults to care for him. “It was the best time of my life,” he says, speaking from his longtime home on Kibbutz HaOgen, northeast of Netanya. “I was so happy there.”

After a seeming eternity of fleeing from place to place, living under a fake Polish name, taking shelter where he could and doing odd jobs to stay alive (“We children were like adults then,” he says), above all, in Zakopane, the 9-year-old felt safe.

Safe, that is, until the night in 1945 when Polish nationalists began shooting and throwing grenades through the windows while home director Lena Kuchler and her volunteers scrambled to push the kids’ beds into the hall to protect them from harm. That was the night Kuchler decided that she and her young wards—many still healing from injuries and illnesses they had sustained over years of neglect and abuse—could no longer remain in Poland. A journey destined to take them to France, and eventually, to the infant State of Israel in 1949.

Meira Erlich also remembers the night of the attack. The 10-year-old had already seen her mother killed before her eyes and her father taken from their home in occupied Poland. When the woman who’d been sheltering her told her to get out, she walked the street until the village priest sent her to a family whose child had recently died. They renamed her Marissa and kept her with them until liberation. By the time she was brought to Zakopane at war’s end, she had developed a full-blown case of tuberculosis.

“I cannot forget any of this, not even for one day,” says Erlich, now 86 and living near Haifa. “Even now, I don’t forget.”

Zakopane is one of seven very special group homes featured in a new online exhibit by Yad Vashem: The World Holocaust Remembrance Center in time for International Holocaust Remembrance Day on Wednesday, Jan. 27. Designed for everyone—families, educators and congregations alike—“Children’s Homes for Holocaust Survivors: “My Lost Childhood” is replete with testimonies from the children who lived there and 150 historic photographs, many of them being released publicly for the first time.

Though 1.5 million Jewish children were murdered in the Holocaust, it’s likely that fewer than 100,000 survived. These were youngsters who’d been taken in by non-Jews, hidden with partisans in the forest, lived on the street, or most miraculously of all, actually survived labor and concentration camps.

The exhibit shines a light on a little-known phenomenon: Situated across Europe were dozens of group homes—known in Yiddish as kinderheim—where tens of thousands of Jewish children who’d managed to survive the Shoah found a place to heal, and for many, to reconnect with the Jewish people from whom they’d been separated at a young age.

Funded mostly by the American Jewish Joint Distribution Committee (the JDC or the “Joint”), the homes were also supported by the Jewish Agency and assorted Jewish organizations with help from volunteers from Israel (then Mandatory Palestine) and soldiers from the British Army’s Jewish Brigade. Many of the children came to the homes after not finding any family alive back in their old towns; others were brought by neighbors and Poles who kept their eyes open for Jewish youth; while still others were found by members of the Zionist Koordynacja (Coordination Committee) for the Redemption of Jewish Children, formed in Poland to locate them. 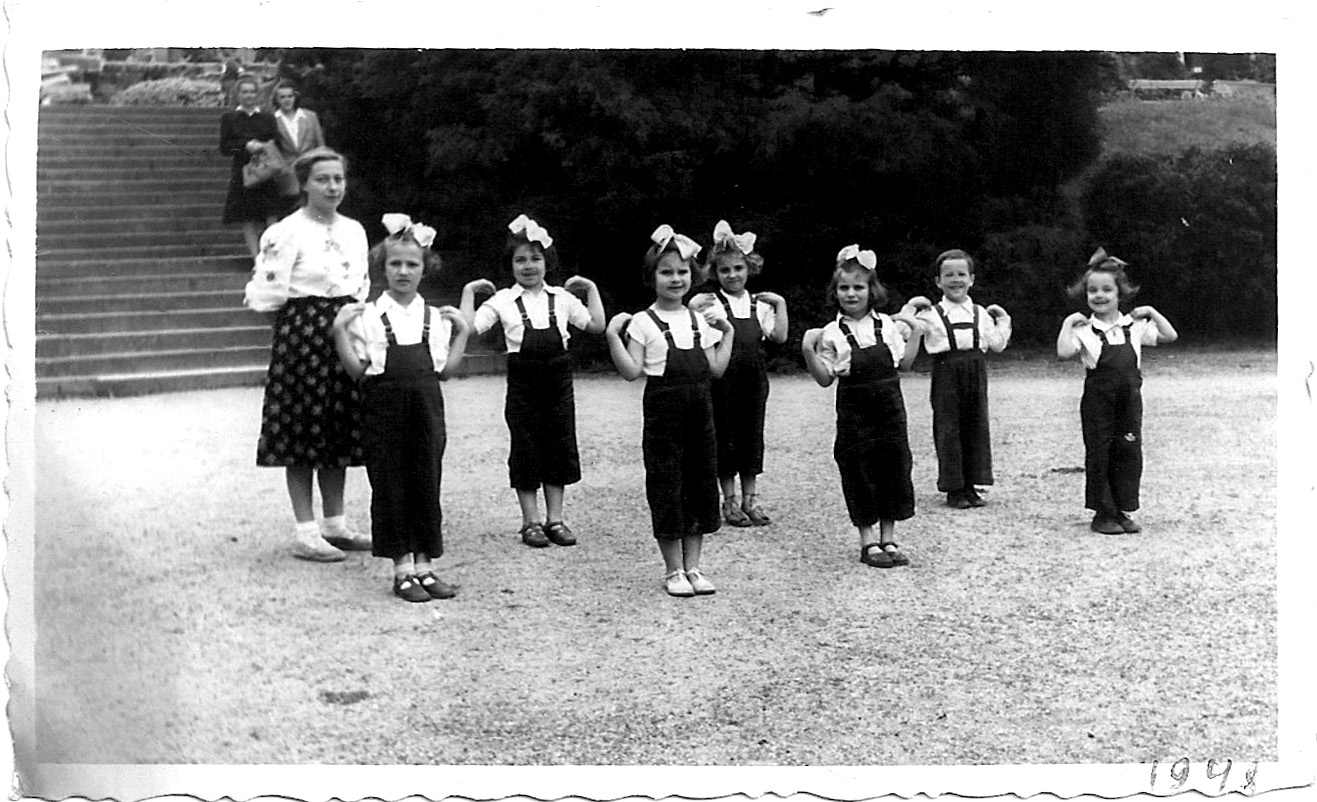 Situated across Europe were dozens of group homes—known in Yiddish as kinderheim—where tens of thousands of Jewish children who’d managed to survive the Shoah found a place to heal, and for many, to reconnect with the Jewish people from whom they’d been separated at a young age. Credit: Yad Vashem.

By the time Renee Baff Kochman arrived at the Blankenese children’s home in Hamburg, Germany, she was 17. The year was 1946, and like so many of the others, she was an orphan; her mother Shifra had been killed in the Lodz ghetto and her father Shelomo had died in a labor camp. Kochman herself had survived Auschwitz.

‘These homes brought them back to life’

“I emerged from the death camps after enduring the most terrible experience ever recorded in history, damaged in body and spirit,” she wrote years later, having given testimony to the Spielberg Visual History Archive in her Upstate New York home. “After indescribable losses—my family, my childhood and my friends—I was overwhelmed with emotional and physical pain.” 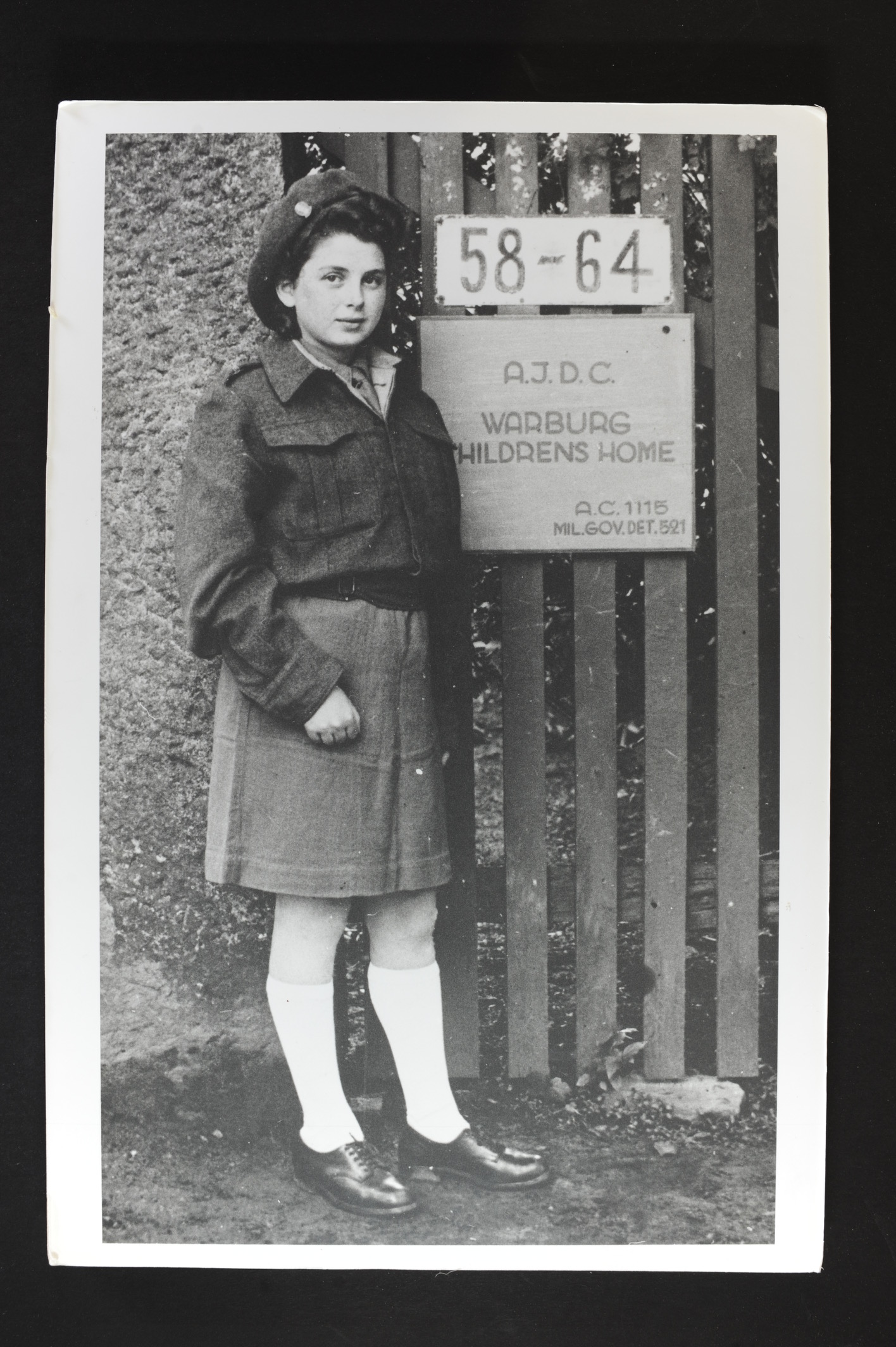 Renia Baaf (later, Renne Kochman) next to the entrance gate of the children’s home in Blankenese, Hamburg, Germany, 1946. Credit: Courtesy.

But Blankenese “restored part of my lost childhood to me,” she added. “It became my home.” After nearly a year there, Kochman made aliyah, eventually moving to the United States.

“When you consider the odds against their survival, each of them was a miracle,” says Yad Vashem spokesman Simmy Allen.

The most well-known of these miracles were future Nobel Prize winner Eli Wiesel and future Chief Rabbi of Israel Yisrael Meir Lau. They were among the 1,000 “Buchenwald Boys,” half of whom, including 8-year-old Lau and 16-year-old Wiesel, were sent to the Ecouis children’s home in France. The dramatic story of Lau’s childhood is recorded in his memoir Do Not Raise a Hand Against the Boy, whereas much of Wiesel’s story can be found in the classic book Night.

“Whether they’d survived in hiding or in forced labor or concentration camps, their childhoods were ripped from them,” says exhibit curator Yona Kobo, the daughter of survivors. “They were undernourished and desperately in need of healing, both physically and emotionally. These homes actually brought them back to life.”

Healing from such intense childhood pain is not a simple process, says one expert on the effects of childhood trauma. “Not only did these children experience the forced separation from their parents at an early age, but all too often, they also suffered abuse at the hands of their caregivers, so they felt unsafe, emotionally as well as physically,” says psychologist Julian Ford, a professor at the University of Connecticut School of Medicine and part of a team that identified Developmental Trauma Disorder (DTD).

This can give rise to a host of problems, including difficulty in forming loving bonds in the future.

For them to recover and lead a healthy life, Ford maintains, “these children need to experience a relationship with a good role model and source of security who won’t judge them.” This allows the child to “manage their emotions and most importantly to learn to trust.”

But the new caretaker must understand the child’s need to “catch up,” he adds, by being kind and, just as importantly, by gently setting consistent limits. “This takes a long time and a lot of patience, especially with all that they went through,” says Ford. “But with children, there is so much resiliency as well as so much hope.” 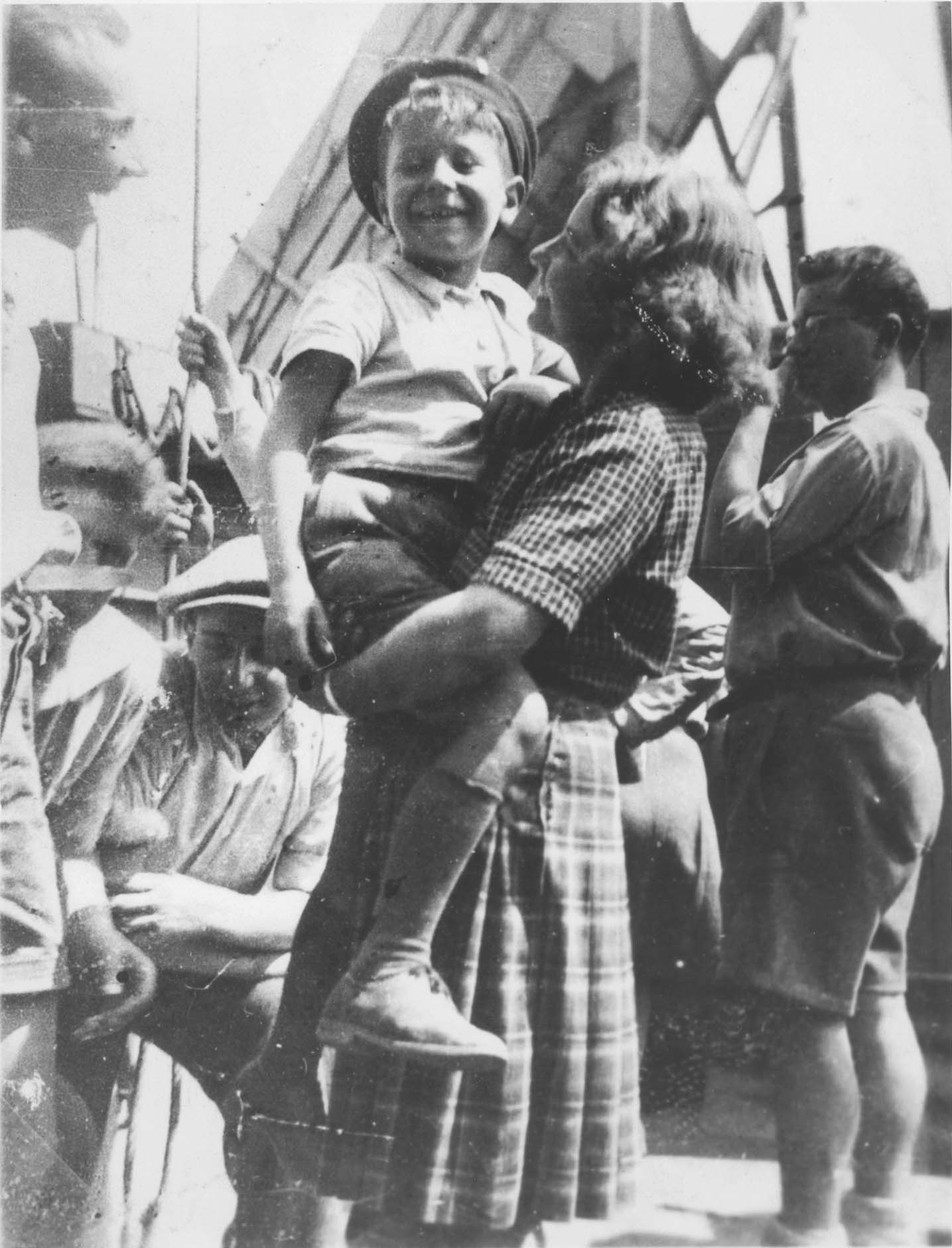 Indeed, among the most potent of the healing forces at work in these children’s homes were their young counselors—or madrichim, as they were called in the Zionistic homes where they were learning Hebrew. Many of these 17- to 25-year-olds were Holocaust orphans themselves and barely older than their charges, says Kobo.

As Kochman recalls, “my teachers and the other girls became my friends and my family.”

“As survivors, they could identify with the children’s pain, comprehend what they had endured, and, because they were alone in the world, too, the bonds they formed with these lost children were equally healing for them,” adds curator Kobo. “The connection with a child desperate for someone they could trust was a special bond that allowed both of them to go on to eventually lead happy, productive lives.”

One such hero was Yeshayahu Drucker, a Jewish chaplain in the Polish army who, after liberation, doggedly combed the Polish neighborhoods and countryside for Jewish children, then bringing them to the children’s home in Zabrze.

“In most cases, child survivors living with Poles didn’t want to part from these families,” he wrote later. “Even when they had been badly treated, they didn’t want to go.” And that began a delicate process of disentangling the youngster from what was, in many cases, the only place they knew as home.

Whereas roughly a third of the children in these group homes were reunited with relatives in the United States, South Africa, Latin America and Canada, the other two-thirds eventually made their way to Israel, says Yad Vashem’s Allen.

“Many went on to build the infant State of Israel, including the kibbutzim, with a strength they’d gained in these children’s homes,” he says. “Here they had a cause, a purpose and a direction. After what they’d been through and what they’d seen, it had to be highly rehabilitative to part of building the Jewish state from the ground up.” 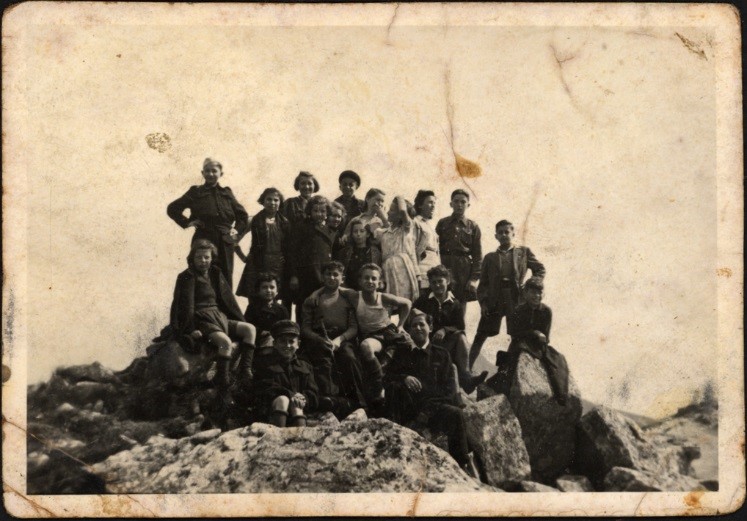 The children at the home in Zakopane, Poland, 1945. Credit: Yad Vashem.

Including Meira Erlich, who arrived in Israel in 1947 at age 12, having left Poland the year before with 250 other children from the group homes, led by Rabbi Shlomo Schonfeld, who resettled them with Jewish families in London.

“As soon as I heard about a Jewish state, I knew I had to be here,” she recalls. Seventy-three years, two children and six grandchildren later, she remains in the Haifa area.

In 1950, Yaakov Guterman was a teenager when his mother and stepfather announced their plans to move the family to Canada. “But I convinced them to come to Israel instead,” he recalls. “I knew I needed to be here.”

Today, Guterman and his wife still live—and enjoy their five grandchildren—on Kibbutz HaOgen where they raised their four children, the oldest having lost his life in the Lebanon War.

In the late 1950s, Lena Küchler, the director of the Zakopane children’s home who’d resolved to get her young wards out of Poland after the attack on their home, wrote in her memoir My Hundred Children:

“In our apartment on Yarkon Street, close to Tel Aviv’s beach … we are holding a reception for my hundred children. Today, 10 years after our initial meeting, they are happy and approach their lives with confidence. No one would believe that these are the same aggressive, miserable children I found at the Jewish Committee offices at 38 Dluga Street in Krakow. The wondrous completion of this return to life took place here, under the blue skies of Israel, when they experienced the freedom that only a homeland can give to its children—the freedom to spread one’s wings.”

Yad Vashem offers the opportunity to be matched with a Holocaust victim, either randomly from the database of 5 million or by name, age or hometown, and be sent their life story and testimony. Both names are posted on the “I Remember Wall” online. Last year, 85,000 people, including students and bar and bar mitzvah youngsters, were matched with a victim. To learn more, click here.