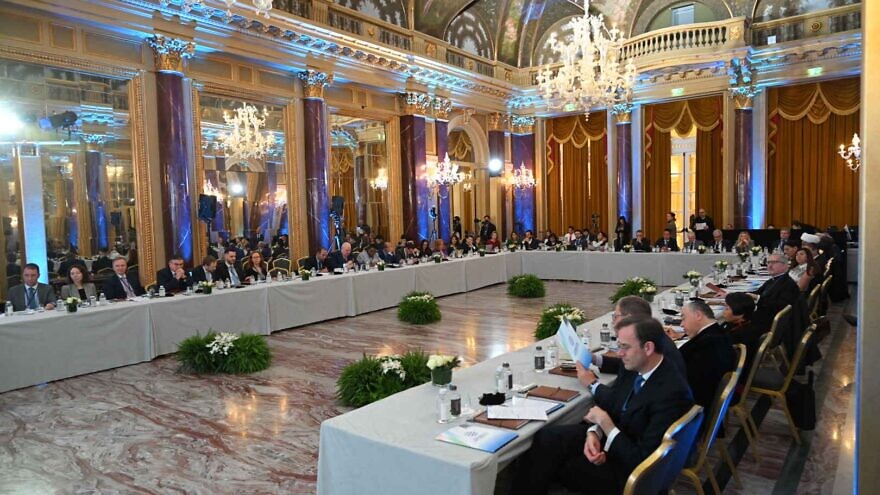 The event celebrated the 2020 accords between Israel and several Arab states, underscored the shared values of the monotheistic faiths and sought ways to bring the benefits of the accords to other countries, particularly in the developing world.

“The fact that today we are here with dozens of dignitaries from all around the world coming to learn about how we achieve peace in the Middle East is very exciting,” former Israeli Ambassador to the U.N. Danny Danon told JNS.

Danon, who attended the conference, said the time has come to look at the accords not only as bilateral, but multilateral.

“It shouldn’t be that only we, the participants, enjoy the fruits of peace,” he said. “We’re talking about plans in Africa, Central America, Asia. They should see that the collaboration helps them.”

One potential area of collaboration is food security, which has become a global concern in the wake of the Ukraine war. Danon said that the Gulf States are looking to develop agricultural projects in Africa, and that Israel will play a role through its technological know-how. “The partnership will help support African economies, ensure food supply to the Gulf and Israel will enjoy the fact that we are sharing our technology with other nations,” he said.

Danon gives Israel positive marks for its efforts to deepen relations with signatories to the Abraham Accords countries.

“We can be very proud of what we achieved,” he said, adding that he expects the situation to improve even more going forward as Israel puts the political turmoil of the last few years behind it and enters a period of stability under the leadership of Benjamin Netanyahu.

The summit highlighted the shared values of the Abrahamic religions, concluding with an Abrahamic Values Pledge, a declaration in which delegates expressed their support for traditional family values that “have sustained and allowed religions and cultures to impact the world in a positive way that has resulted in a commitment to a strong sense of humanity, tolerance and coexistence.”

Elie Abadie, senior rabbi of the United Arab Emirates, told JNS: “The three pillars of this summit are tolerance, coexistence and diversity, religion and family and economic peace. These three pillars are very important that we, as participants in this summit, seek to spread and teach the entire world.”

Abadie described the Emirati response to the accords as very positive. “They want to learn more about Jews, more about Israel. They want to connect. It has been a very rewarding experience,” he said.

“As a young Jewish boy, fleeing my hometown of Beirut, I would have never dreamed that one day I would be serving as a rabbi in an Arab country. Never mind an Arab country with a rapidly growing Jewish community that has signed a peace accord with the State of Israel. We are living in profound times and must seize the opportunities that lay before us,” he added.

Imam Mohammad Tawhidi, an Iranian-born Shi’ite Muslim scholar and vice president of The Global Imams Council, told JNS that when the Abraham Accords were first announced in 2020, “I was very happy because I had been speaking before the Abraham Accords about a time where there would be peace between Muslim and Jewish states. And many people saw that as impossible or as a fantasy.”

Tawhidi made another prediction. “Peace between Israel, Iran, and even between the Shi’ite and the Sunni world is closer than ever. The people of Iran have seen the fruits of the Abraham Accords, they have witnessed how fast peace can be built, and many remember the days of Israeli tourists visiting Tehran and long for those days to return,” he said.

Tawhidi said that as recently as 2018, he still had “fundamentalist tendencies,” and that one of the people who influenced him was Rabbi Abadie. Tawhidi has since become “a passionate defender” of Jews. “Now I take antisemitism personally,” he said.

Some can’t speak out for reasons of safety, or they preach in their native languages, which don’t reach western ears. “I combine English, social media [he has 800,000 Twitter followers], and I’m able to speak freely. The others might be missing one of those essential factors,” he said.